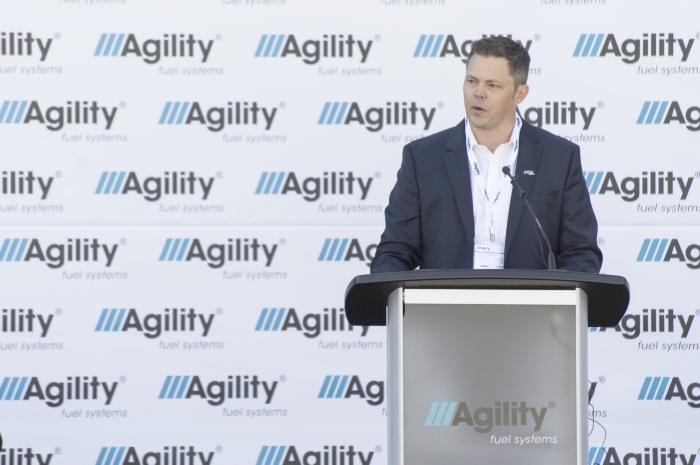 Adelsberger, the general manager of Agility’s East Coast headquarters in Salisbury, recalls one particular stop on the shopping trip quite vividly. After all, it’s the spot Agility stopped at to make a $20 million purchase.

Adelsberger and Agility were actively browsing available buildings in multiple counties for an East Coast facility. He stopped on Corporate Center Drive — near Julian Road — in front of group of men in suits.

“They looked like they were ready for a fight,” Adelsberger said. “And, they were.”

Then men didn’t have an available building for Agility to use, but they did have a piece of paper with plans for a custom-built facility. A forested area sat in the intended location for Agility’s building.

A custom-built facility was questionable at first, Adelsberger said. Agility needed to be producing its natural gas fuel systems in 13 months.

Agility Fuel Systems held a private grand opening ceremony Wednesday at its 204,000-square-foot East Coast headquarters, which currently has 77 employees. Production is scheduled to start in about a week. The company plans to hire about 150 for its first shift, according to Adelsberger. The addition of a second shift is possible and would double the number of employees, he said.

“What’s inside this beautifully constructed, 204,000-square-foot building is a game-changer for our industry,” he said. “Agility now has complete control in one location over the quality, cost and delivery of our natural gas fuel systems.”

He also stressed the importance of the clean-burning fuel systems Agility creates.

However, the long road to Wednesday’s announcement began in a garage, where Agility’s founders built their first natural gas fuel system. The company secured its first bus contract before it even owned a facility to produce a product. Agility now owns the largest market share of its industry.

Salisbury Mayor Paul Woodson looked to a moment from the Andy Griffith Show for his speech.

“It’s like my favorite characters on TV, as Barney Fife told Andy,” Woodson said during his speech. “Barney said ‘Andy, this is big. This is real big.’ ”