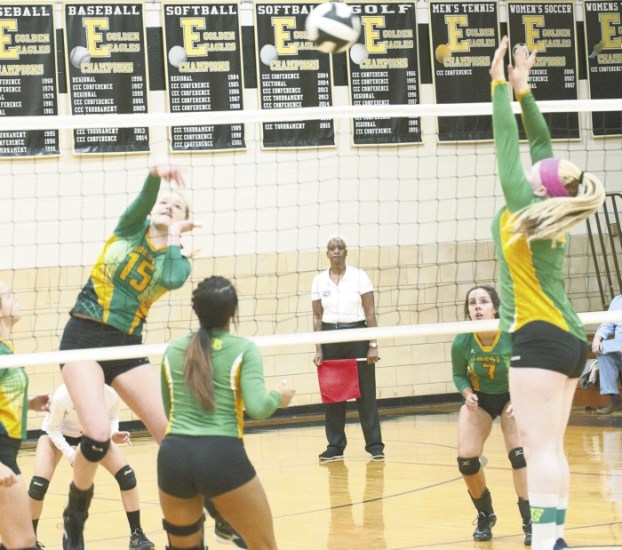 Photo courtesy of Mike Duprez/Lexington Dispatch... West Davidson’s Ashley Johnson (15) on the attack against North Rowan in the CCC Tournament final on Wednesday in Thomasville. Defending are North’s Makala Lytton and Chevy Blaire.

THOMASVILLE — Both volleyball teams wore green, but the similarities ended there.
Efficient West Davidson swept error-prone North Rowan, 25-18, 25-14 and 25-21, on Wednesday to claim the Central Carolina Conference Tournament championship.
The top-seeded Green Dragons (15-7) won the first two sets so breezily and easily that it was hard to believe they lost to second-seeded North Rowan in Spencer on Oct. 6.
North showed a lot more fight in the third set, but West Davidson pulled that one out as well.
“Toward the end of the second set, we started to play better,” North coach Sandy Lytton said. “Before the third set, I reminded them there was no pressure, to just go out and play the way they can. We were going to be the league’s No. 2 seed for the state playoffs, win or lose.”
Aliyah Farmer had eight kills and three blocks for the Cavaliers (9-14). Makala Lytton had seven kills and led the Cavaliers in digs. Chevy Blaire had three kills and three blocks. Freshman Bil’lizah Connor had four kills.
The turning point came in the first set. North led, 10-5, after an ace by Farmer, but West Davidson reeled off the next eight points in a row and grabbed momentum.
“The key for us is if we serve well, and we started serving well,” West Davidson coach Michael Green said.
West Davidson was pounding serves, and North was struggling mightily with serve-receive. That was a deadly combination for the Cavaliers.
When West Davidson roared to a 14-4 lead to start the second set, it meant that the Green Dragons had dominated the Cavaliers, 32-12, over a long stretch. West Davidson finished off the the set and a 2-0 lead.
“When we watched West Davidson against East Davidson, they were missing serves,” Coach Lytton said. “But their serves were on tonight, and we didn’t pass well at all. We can make great hits, we can hit the ball right over people, but the question for us is always, ‘Can we pass?’ Tonight, we just couldn’t.”
In the third set, Makala Lytton broke a 9-all tie with a strong kill, and Farmer hammered one that was even stronger and scarier for a 12-10 North lead. North stretched its lead to 16-12, but Green called a timeout and reminded his team of the game plan.
“The game plan was to keep it away from Makala Lytton,” Green explained. “We were letting her get too many touches.”
West Davidson players listened, kept the ball away from Lytton and immediately grabbed a 19-17 lead. Lytton had the kill that got North within 19-18. Then Blaire’s kill in the middle made it 21-all.
Soaring on the left side, Lytton had a chance for a go-ahead kill, but her attempt sailed long by inches on the pivotal point.
Then a West Davidson team that has several promising freshmen in key roles quickly closed out the set and match with a block by Madi Lilly and a kill by Diva Gaddy.
“It just took us too long to play the way we needed to play,” Makala Lytton said. “We beat them once and I know we could’ve beaten them again if we’d played our best. We started to play better in that last set, but we just didn’t have quite enough.”
•••
West Davidson has been the CCC’s consistently strong program, although North shared the conference title with the Green Dragons in 2013 and Salisbury ruled the league last year. … Playoff pairings will be released today. As the league’s No. 2 seed, North has a chance for a home game in Saturday’s first round. … Makala Lytton was the CCC Player of the Year in 2013. She missed 2014 with a torn ACL, but she’s come back strong as a senior with 175 kills, nearly 300 digs and 83 aces.