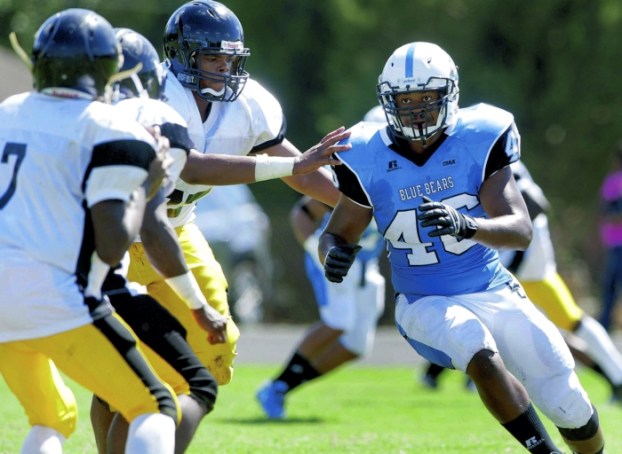 For Cox and Flowers, it was about trusting in Livingstone

Their coaches and Blue Bears fans are sure glad they did, as the two played key roles in the big 41-22 victory last Saturday at Shaw.

Cox, a 6-3, 230-pound defensive end, returned a fumble 98 yards for a touchdown, as Shaw was getting ready to add to its 14-13 first-half lead. The play completely swung momentum over to Livingstone. Flowers scored on two TD passes from quarterback Drew Powell, including the Blue Bears’ first of the day, when they were trying to dig out of a early 14-0 hole.

Both players are in their first years at Livingstone. Cox, a second semester freshman from Teaneck, N.J., just across the George Washington Bridge from New York City, arrived in January and went through spring practice. Flowers, a junior transfer from Long Beach, Calif., arrived in Salisbury on Aug. 10, for pre-season practice.

Neither Cox nor Flowers visited Livingstone before accepting their scholarship offers and committing to don the blue, black and white.

“We actually have about 10 or 12 guys like that, who came sight unseen and trusted in our program and in us as coaches,” said Livingstone head coach Daryl Williams. “It shows that we have a lot of integrity and do exactly what we tell a young man during the recruiting process. It’s about fulfilling every obligation.”

Cox, whose father played linebacker at Rutgers in the mid-1980s, went to St. Peter’s Prep in Jersey City and before a torn tendon in his left shoulder during his senior year, Cox was being recruited by East Stroudsburg, Rutgers, Penn and James Madison. Cox ended up at Georgia Prep Sports Academy in Atlanta.

Cox played linebacker at GPSA last fall and was leaning toward Youngstown State when that staff was let go in December. With the help of coaches in Atlanta and at Livingstone, an offer was made to Cox and he took it without hesitation.

“I went through spring practice and lifting and it felt like I had made a good decision to be here,” said Cox. “I want to see how far football can take me and also, to get my education.”

Flowers has a similar story while playing high school football in southern California. At St. Anthony’s High School, Flowers missed three games due to an ankle injury at mid-season, after being named Athlete of the Month in that region for September 2012.

“Our coaches out there sent out videos on us and then we followed up ourselves,” said Flowers. “Coach James and I stayed in touch throughout the spring. When he made me an offer, I decided to take it, even without visiting. I came here for practice in August and saw the campus for the first time.”

Flowers, a little under-sized at 5-6, 180 pounds, has come off the bench to rush for 144 yards on 28 carries.  He has also caught 11 passes for 86 yards, including three touchdowns. Flowers is also the holder for kicker Leo Manzo’s extra points and field goals and he is on the kickoff return team.

It’s unusual for a running back to be a team’s holder, but “I like to do whatever makes the team productive,” said Flowers.

Williams said that it’s more about having the best athletes on the field, even during kicks. “Flowers does a whole lot for us, in addition to holding for kicks,” said Williams. “The more you can do, the more valuable you are to the team. It’s like (NFL great) coach Bill Parcells said once, ‘now that you’re in the locker room, are you willing to help? If you are willing to help the team in any way possible, then your teammates will gravitate towards you.'”

Williams remembers when he first laid eyes on Flowers in August.

“I remember thinking, this guy is small,” said Williams. “But each and every day during camp, he did something good , did something better than the day before. He came in and learned our offense and every time we needed somebody to get in there, either at receiver or running back, he’d jump in there. He’s a smart football player and plays much bigger than he is. When you’re undersized like he is, you have to be smart and quick, which he is.”

The Blue Bears’ coach is also high on Cox.

“Cox has accepted his role,” said Williams. “He’s one of our defensive leaders and he’s an outstanding student also. He does a lot through his actions and has stepped up and done more than I could’ve asked from him at this early point in his career. He’s reliable and dependable and it’s showing on the football field.”

Cox is modest about starting as a freshman and currently leading the team in tackles with 27, six for losses. He also has two fumble recoveries, a pass breakup and two hurries on the quarterback. “I don’t see that I stand out that much,” said Cox. “I always want to be in position to make a tackle. I anticipate well and put myself in a good position most of the time.”

“We call Cox the big fundamental because, fundamentally, he does everything right,” said Williams. “That makes up for the fact that he is a little undersized for a defensive end.”

So what exactly did Cox see at the goal line last Saturday?

“They had brought a receiver into the game to play quarterback, so we thought a sneak was coming,” said Cox. “He bobbled the snap and I saw everyone jump on the pile. I had lined up over the guard, and he tried to push me back into the end zone. I was fighting him off and the ball rolls out between his legs, so I picked it up and started to run.”

Cox was escorted by defensive back Billy Moore and other teammates and he was off on the race of a lifetime. “By the other 40-yard line, I was starting to run out of gas and slow down some, but I made it.”

Williams said he saw the referee nearly blow the whistle, thinking ball was recovered in the end zone.

“But he didn’t and here comes Armond out there with it,” said Williams. “Actually, I was afraid that we were going to get a 15-yard penalty because half of the team was down there celebrating with him and he may have gotten away with spiking the football. It changed the whole momentum of the game.”

By Mike London mike.london@salisburypost.com SALISBURY — You have to smile when Salisbury tennis players talk about a comeback. “We like... read more