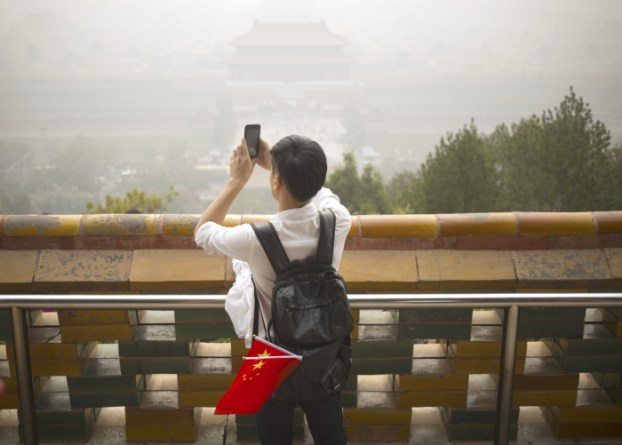 A visitor takes photos of the Forbidden City on a polluted day in Beijing, Wednesday, Oct. 7, 2015. For the second day in a row air quality readings were at levels considered hazardous by international measuring standards. AP Photo

Improving air quality may help Rowan County recruit more industry, but there’s a better, more immediate benefit — easier breathing for some of our most vulnerable residents.

From 2001 to 2011, the number of Americans with asthma grew by 28 percent, says the Centers for Disease Control. North Carolina has experienced a similar upward trend.

School nurses see the trend first-hand. One out of every 10 children in North Carolina has asthma, going into scary bouts of wheezing, breathlessness and chest-tighteness. These episodes are triggered by irritants like strong chemicals, pesticides and pollutants; strong odors; and secondhand smoke. Allergies can also set off an attack.

Asthma is the most common chronic disease among children— affecting more than 92,000 school-age children in the state in 2009-10 — and is a leading cause of absenteeism.

Young people often carry the disease into adulthood; while others develop it later in life, sometimes along with other lung maladies. Some 8 percent of the state’s 65-plus age group also has asthma.

During a recent interview with reporter Josh Bergeron, Center for the Environment head Dr. John Wear compared breathing in high levels of ozone to breathing in a mild form of bleach. It would follow that people with asthma or chronic obstructive pulmonary disease experience that sensation much more acutely.

People wear air pollution masks in parts of the world, such as China and Indonesia to avoid breathing in carcinogens and other toxins. Air pollution has become the world’s biggest environmental health risk with 7 million deaths per year, according to the World Health Organization.

People complain about government overreach, but without environmental laws and standards to protect air quality, we might all be wearing masks. Don’t take our clean air for granted. It comes at a price, that’s for sure, but the consequences of breathing in polluted air would be much worse.

Prayer practice is part of our Christian heritage I was visiting your city the weekend of Oct. 10. In response... read more