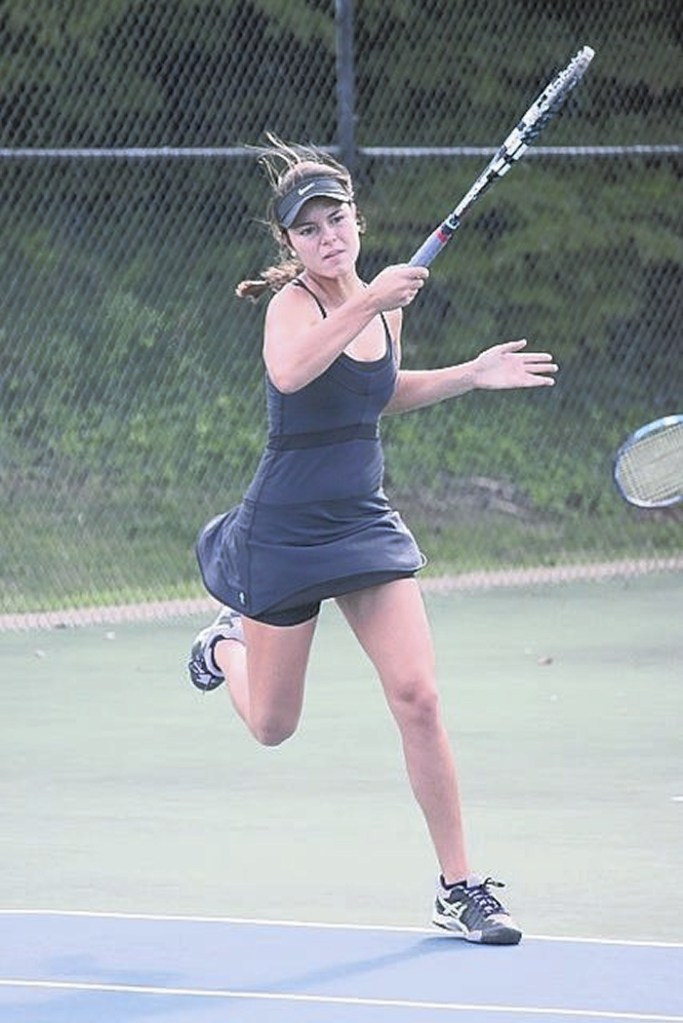 submitted photo Kayla Honeycutt, Salisbury’s No. 1 singles player, won 6-0, 6-0, against South Stokes in the first round of the state playoffs on Tuesday.

SALISBURY — You have to smile when Salisbury tennis players talk about a comeback.
“We like to think it’s our year — a comeback year,” senior Kathryn Rusher said.
The Hornets reached the state semifinals in 2014. For almost anyone else, that’s cause for a parade, not a comeback.
But this is an unusual 2A tennis program. Salisbury has won 277 of its last 279 conference matches (that includes seasons in 3A as well as 2A) and 146 straight in the 2A Central Carolina Conference where the Hornets haven’t dropped a league match since 2002.
On the fence where the Hornets play are placards quietly celebrating state championships — 1994, 1995, 1996, 2006, 2008, 2009, 2010, 2011, 2012 and 2013.
They aren’t expected to win a title this time — Lake Norman Charter, the team that beat the Hornets last season in the Western final is undefeated again — but the Hornets are preparing for either a championship celebration or a memorable, no-regrets exit with every ounce of energy left on the court.
“We’ve got a lot of experience,” said Kayla Honeycutt, the team’s vocal leader and a senior who is the reigning 2A individual singles champion. “We all know how much we’re going to miss this, so we’ve really worked. There were some good girls in our league this year, and we’ve also been playing on weekends and pushing ourselves when we play against each other in practice. We’ve done all we can do to prepare for a good run.”
Salisbury (13-1) lost to 4A power Charlotte Catholic, but other than that it’s been smooth sailing for a team with a top six of four seniors and two sophomores. There are two sets of sisters — Honeycutts and Capitos.
The Hornets opened the dual team state playoffs on Tuesday at home and took care of business in a hurry against the South Stokes Sauras of the Western Piedmont Conference.
“We played confident,” Emily Capito said. “This was just the first round. We knew we had to win this one.”
Rusher said she spent some time trying to research the Sauras but couldn’t find much.
“There was a little bit of worry because it was the playoffs and it was against girls that we didn’t know,” Rusher said. “But we did well and we all got to work on some things.”
The Hornets won emphatically in straight sets, dropping only two games.
“We haven’t seen the kind of power we ran into today,” South Stokes coach Darren Redding said. “Power like Salisbury makes you a step slower than usual. Your eyes have to speed up, your reflexes have to speed up, everything has to speed up. We’ve got a good team and we made the playoffs for the third year in a row with this group, but we saw today how much better we have to get. This was good for us.”
Salisbury coach Milton Griffith calmly penciled the scores in his book. They looked no different than the tallies from the conference matches. Kayla Honeycutt, Steinman, Maria Capito and Julia Honeycutt won 6-0, 6-0. No. 2 player Kathryn Rusher won 6-0, 6-1 and Emily Capito prevailed 6-1, 6-0.
“Our girls came to play today, most definitely,” Griffith said. “They stepped up their game for the playoffs, especially Emily Capito. The South Stokes girl at No. 6 wasn’t a normal No. 6.”
Patient Julia Honeycutt won at No. 5 against Jenny Smith, who came into the match 9-0.
All the Hornets had nice things to say about South Stokes.
“Those were good players and good girls, Steinman said. “But we had tunnel vision today. We were very focused, and we went out and did our thing. We’ve got a good team, we all get along, and we want to continue the winning.”
First-year coach Griffith said he couldn’t have asked for a better group.
“They’ve never stopped working because they really want to get better,” Griffith said. “They’ve just got to to take it one match at a time. If you lose in the playoffs, you’re gone.”
•••
Salisbury is the host for the 2A Midwest individual regionals that will be held Friday and Saturday at Salisbury High, City Park and Catawba. Girls from the Central Carolina, Mountain Valley, PAC-6, Rocky River and Western Piedmont Athletic will be involved. … Participants will include Maria Capito, Julia Honeycutt and North Rowan’s Samantha Pritchard in singles and the doubles teams of Kayla Honeycutt/Rusher and Emily Capito/Steinman. … Salisbury will play its second-round dual team match at home next Tuesday against West Lincoln (12-1).