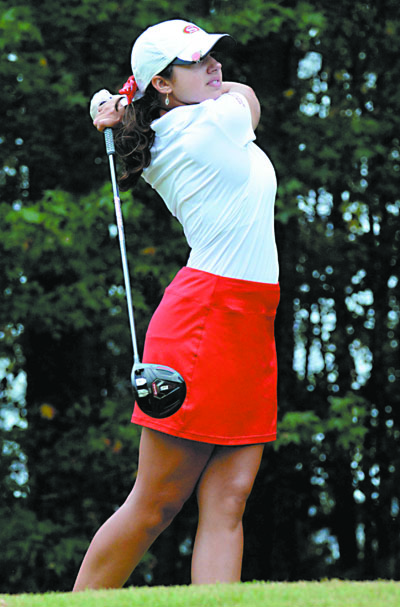 Salisbury"s Grace Yatawara tees off in the Rowan County Girls Golf Tournament at the Warrior. photo by Wayne Hinshaw, for the Salisbury Post

It qualified as one of the longer Mondays of Salisbury senior Grace Yatawara’s life, but it was worth it.
She and fellow seniors Caroline Parrott and Shelby Holden made the Hornets one of the three qualifying teams, and Yatawara repeated as 1A/2A Central Regional champion at Mount Airy’s Cross Creek Country Club.
“I got up at 5:45 a.m. and we got back home after 8 p.m.,” the East Carolina commitment said in a phone interview. “Yes, a very long day, but a good day.”
Yatawara shot 4-over 77 on Monday, the same score she recorded on the difficult Cross Creek layout a year ago. This was the third regional title for Yatawara, who also took regional honors in 2013 at the Country Club of Salisbury.
This looks like the last hurrah for Salisbury’s golf dynasty, but the three seniors who make up the team made certain on Monday that they’ll close their careers in state-championship play.
The 1A/2A Championships will be held at Longleaf Golf & Country Club on Oct. 26-27. Salisbury has won the last four team titles. Yatawara is the defending individual champion as well.
Salisbury’s CCC rival West Davidson won Monday’s regional with a 268. Salisbury’s 279 was good for second place. 1A Gray Stone grabbed the third qualifying berth with a 285 total.
Parrott shot 98 on Thursday, while Holden carded a 105.
“They both played well, but Cross Creek is a challenging course,” Yatawara said. “There’s so much water and there are some very small landing areas. It’s a course that can be very intimidating. The scores were actually lower than last year’s because it wasn’t as windy. Last year, a 127 qualified for the state tournament. This year it was 111.”
Yatawara’s day started with trouble on No. 1. She smacked a 5-wood off the tee, and her shot bounced into a creek.
“The ball took a good bounce — but it turned into a bad bounce,” Yatawara said with a laugh.
After taking a stroke penalty, Yatawara belted her third shot 225 yards and two-putted for a par 5.
She found the water a second time during her round and hit out of bounds once, so her 77 was strong.
“I played all right, but the penalties hurt,” Yatawara said. “There were only five holes where I could hit a driver.”
But Yatawara avoided any disasters and won the regional comfortably by seven strokes. West Davidson junior Rachael Mast and Mount Airy freshman Alyssa Cox shot 84 to tie for second.
Yatawara’s scorecard included five bogeys, 12 pars and one birdie.
The lone birdie was her 2 on the par-3 14th hole.
“I hit a pitching wedge at the flag, it went about 10 feet past the hole, but then it came back to about 7 feet,” Yatawara said. “Then I made a downhill putt.”
Yatawara is excited about moving on and defending her state title, but she’s even more thrilled that the Hornets will also be competing for the team crown.
“I’m very happy for my teammates, and Caroline is especially excited because it’s going to be the first time for her,” Yatawara said.
It will be third time for Holden, who also has competed in the swimming state championships.
It will be the fourth state event for Yatawara, who has finished third, fifth and first.
•••
Carson’s Micah Furr (90) and Adison Collins (103) competed in the 3A Central Regional in Greensboro on Monday and qualified for the 3A Championships at Foxfire Resort and Golf Club on Oct. 26.
Regional scores for all players weren’t available.