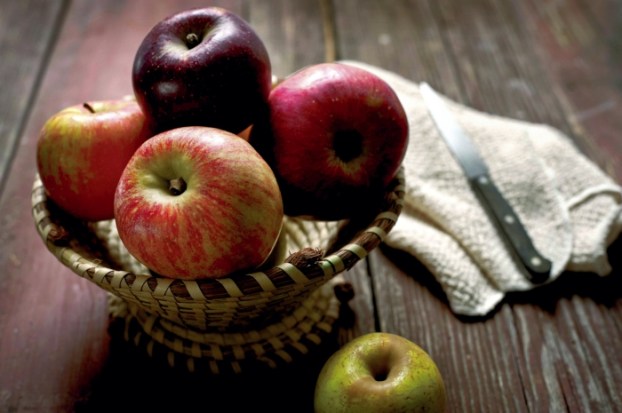 JON C. LAKEY / SALISBURY POST Fall is the time of the year that mouthwatering fresh apple dishes are inclined to be made. Wednesday, October 14, 2015, in Salisbury, N.C.

Fall is all about apples, y’all JON C. LAKEY / SALISBURY POST Simple fresh apple with a crumb crust drizzled with melted carmel. Fall is the time of the year that mouthwatering fresh apple dishes are inclined to be made. Wednesday, October 14, 2015, in Salisbury, N.C.

There are red ones and green ones, pink ones and black ones, sweet ones and tart ones and ones that keep a long time.
It’s apple season in North Carolina, with delicious apples from the familiar red and gold delicious, to heirloom apples to exotic Asian imports.

An orchard visit is like taking a step back in time. At Sugar Loaf orchard in Taylorsville, for example, the apples are in big bins inside a dark building. At one end you’ll find all kinds of bagged apples, a display of old fashioned candy — sticks of root beer and cherry and banana, a pile of Mary Janes, some cream-filled caramels. On another wall is a selection of grits, biscuit mixes and corn meal. Nearby, there are packages of mountain country ham — slices, hocks, side meat.

On the other end is the apple line that washes and sorts the apples before they’re bagged.

At Perry Lowe orchards, you’ll find different ciders, a varietiy of dried apples, a cookbook and more candy.
If you want apples and squash, stop by Brushy Mountain, where a very friendly man will greet you and give you great prices on apples and his homegrown pumpkins, squash and gourds.

Arkansas Blacks are a favorite. Eat them now and they’re hard and tart. Save them and they mellow into an apple just right for applesauce. Honeycrisp, the new darling of apple eaters, is the most expensive apple you’ll see, but there seems to be plenty of them. For cooking, you can find Rome, Stayman, Granny Smith.

This year, there were Crimson Crisp, too, tarter than Honey Crisp. And York, an old-fashioned apple with some bite. You could try Fuji, Mutsu and now, Shizuka, all with Asian roots.

The magna bonum apple originated in North Carolina in the 19th century. You might find apples you’ve never heard of, some with long histories, others new grafts. The names go on and on.

Apples need the cooler weather of our mountain counties to thrive. The drought apparently did not affect quality, though some apples are smaller. Many orchards got rain when it was needed, even if it was inconsistent.

North Carolina has more than 200 commercial apple operations consisting of 9,000 acres. That means we rank seventh in production in the United States.

People who eat apples may have fewer colds and other upper respiratory problems, and apples can help reduce tension headaches.

When you buy apples, be sure to refrigerate them in a plastic bag that will keep them from getting too dry.
But, if you want to preserve apples by drying, here is an easy method.

Using a sharp knife or a mandoline (if you have one), slice two large apples as thin as possible, about 1/8 inch thick. (You can skip peeling and coring you like the look of the dried skins and the pretty pattern the core makes in the center.) Soak the slices in the lemon water for 30 minutes. Drain and pat the slices as dry as possible with paper towels (or clean kitchen towels). Place on the prepared baking sheets in a single layer.

Bake the slices on the upper and lower racks for 1 hour. Remove from the oven and turn each slice over; return the pans to the oven. Bake 1 more hour for soft dried apples or about 2 more hours for crispy apple chips. (Timing depends on your oven, the type of apple and thickness of the slices; check periodically and reduce or increase the total time as needed.) Turn off the oven, crack the door and leave the apples in the oven until the oven cools completely, 1 to 2 hours.

This recipe came from a large cookbook sold at Perry Lowe orchard, “Apples, Apples and More Apple Recipes,” third edition, by McGarvey Summers.
It’s one recipe per 8-1/2-by-10 page, and it’s got about every variation of apple pie and cake you can imagine and other dessert recipes.

Caramel Crumb Apple Pie
5 medium apples, peeled, cored and sliced 1/4 inch think
3/4 cup graham cracker crumbs
1/3 cup light cream
1/2 cup plus 1 Tbsp. sugar
1/4 cup plus 1 Tbsp. flour
1/2 cup broken pecans
Pastry for one crust pie
1 Tbsp. lemon juice
1/2 tsp. ground cinnamon
1/4 tsp. salt
1/4 cup cold water
1/4 cup cold butter
8 individual caramel squares
Preheat the oven to 350 degrees.
In a large bowl, toss the apple slices with the lemon juice, 1 Tbsp. flour and 1 Tbsp. sugar. Arrange the apple slices in the pastry shell. Drizzle the 1/3 cup cream over the tops of the apples. Combine the 1/2 cup sugar, the graham cracker crumbs, 1/4 cup flour, salt, cinnamon and pecans. Sprinkle over the apples. Combine the caramels, water and butter in a saucepan. Heat until the caramels are melted. Drizzle over the top. Bake for about one hour until the apples are tender and the crust appears golden brown. Cool on a wire rack and serve warm. May be served with vanilla ice cream for that extra treat.

This recipe comes from the same cookbook and produced a light apple cake that improves with age.

Fresh Apple Bundt Cake
2 apples, peeled, cored and diced
1 1/2 cups all purpose flour
1/2 tsp. ground cinnamon
1/4 tsp. baking soda
1/2 cup butter, softened
1/2 tsp. lemon extract
1 cup buttermilk
1 Tbsp. baking powder
1/8 tsp. ground nutmeg
1 cup granulated sugar
2 tsp. vanilla extract
4 large eggs at room temperature
Preheat the oven to 350 degrees.
In a large bowl, combine the flour, baking powder, cinnamon, nutmeg and baking soda. In a mixing bowl, combine the sugar, buttermilk, butter, vanilla and lemon extract. Beat until creamy, about 4 minutes (this splashes a lot) More of the buttermilk may be used to make a smoother texture (up to a 1/4 cup more will make a moister cake). In a small bowl, beat the eggs until well mixed. Alternately add the flour mix and the eggs to the buttermilk mixture, beating until well-blended and fluffy. With a plastic spatula, fold in the apples, Spray a bundt pan with vegetable oil and flour it lightly. Spread the mixture in the bundt pan.

Bake the cake for 55-60 minutes or until golden brown and tests done with a wooden pick. Cool on a wire race for about 15 minutes. Remove from the pan and cool completely. The cake may be dusted with confectioners sugar or a creamy orange frosting may be used. Serves 8 to 10.

A little more apple wouldn’t hurt this cake. Prepared as directed, the cake is almost bread-like the first day and could be good spread with butter. Give it a couple days to mellow and it becomes moister.

Dressing up for Halloween? Local theater shops have you covered

It’s spooky season, and as October draws to a close, many are looking for a change of pace — or... read more