Dressing up for Halloween? Local theater shops have you covered 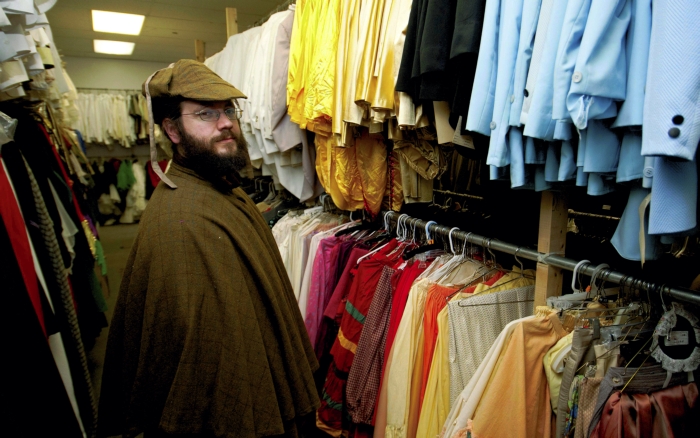 Allen Jones tries on one of the only Sherlock Holmes costumes with the recognizable double billed hat Monday at the Eastern Costume Co. on South Main Street in Salisbury. The shop has a extensive collection of costumes available for rent, and with the Halloween festivities approaching, it is a busy place. Jon C. Lakey/Salisbury Post

It’s spooky season, and as October draws to a close, many are looking for a change of pace — or skin.

Oct. 31 weaves its own kind of magic with glitter and masks. It’s a chance for anonymity, an inverted holiday that gives people the opportunity to try on new faces and new identities. And once the sun rises, you can hang up the cape, brush off the cobwebs, and slink back into your old routine.

This tantalizing chance at a new self has shoppers and retailers on their toes from the first of the month. The National Retail Federation estimates that in 2014 shoppers spent $2.8 billion on costumes alone, with the average would-be-werewolf spending $43 for fur and fangs.

While the Retail Federation says that nearly half of all witches and vampires-to-be purchase their costumes online, it’s not the only option. If you live in Rowan County and don’t mind second-hand, you can get your wrappings and trappings tailored to your taste.

Salisbury offers a few options for its masked shoppers.

The first, and definitely the one with the most variety, is the Eastern Costume Co. on South Main Street. They’ve collected nearly 40,000 costumes from theater productions over the past 35 years, and their selection is truly glittering. And now that they’ve moved from Greensboro to Salisbury, you and your friends could dress up as the cast of your favorite Piedmont Players Theater production.

But whatever you’re looking for, the Eastern Costume Co. can help you out. Ward has been working for the company since it was based in Greensboro, and she’s seen a lot of trends come and go. In the past few years, however, she says there’s been an increase in demand for movie characters — like Katniss from “The Hunger Games” or characters from “Star Wars,” which is seeing a resurrection in popularity due to an anticipated new addition to the pantheon.

The Retail Federation lists several “Star Wars” characters as some of the most popular costumes for 2015. Overall and goggles-bedecked minions from “Despicable Me” and “Minions” as well as the leading ladies from “Frozen” also make the cut. Classic Halloween staples like witches, zombies, various incarnations of a certain black-clad caped crusader, and even a new trend of imitating political figures feature prominently, as well.

But they’ve got just about everything, including several storybook characters.

“We can always put together something you would want.”

If you’re looking for adult costumes, and the National Retail Federation estimates that 65 percent of adults ages 18-65 do, The Eastern Costume Co. has your back. But if your daughter wants a princess dress (the No. 1 kids’ costume this year) or you fancy transforming your toddler into a poofy pumpkin, “We’re limited,” Ward said.

They do have some kids’ costumes, but since most of their stock comes from theater productions, there’s not a lot. If you’re planning on taking the tyke trick-or-treating, Ward says, you’re better off going to a big box store.

If period costumes are your cup of tea, check out the Theater Department at Catawba College. They also have a few items that are more unique. But selection is sparse Erin Dougherty says, since they only have costumes from previous Catawba productions.

“We don’t have things like Disney princesses,” she said.

Costumes also don’t come in standard sizes, since they were made to fit specific actors. But Dougherty says they do have a lot of Renaissance Festival-style gear. If you’re interested, you’ll need to call the costume shop at 704-637-4241 after 1 p.m. on Monday, Wednesday or Friday to make an appointment.

Catawba starts its costume rentals at $25 plus a $15 refundable deposit.

Rentals at the Eastern Costume Co. start at $35 per 24-hour period, and increase depending on the detail of the costume. Starting Oct. 19 and going through the spooky day, they’ll be open from 10 a.m. to 7 p.m. weekdays and Saturdays from 9 a.m. to noon. No appointments necessary. Costume alterations are free with one week’s notice.

And if your tastes are a little more ghoulish, there’s always Walmart.