Yesterday: In 1944, when Harry Welch Sr. slugged it out with Joe Louis 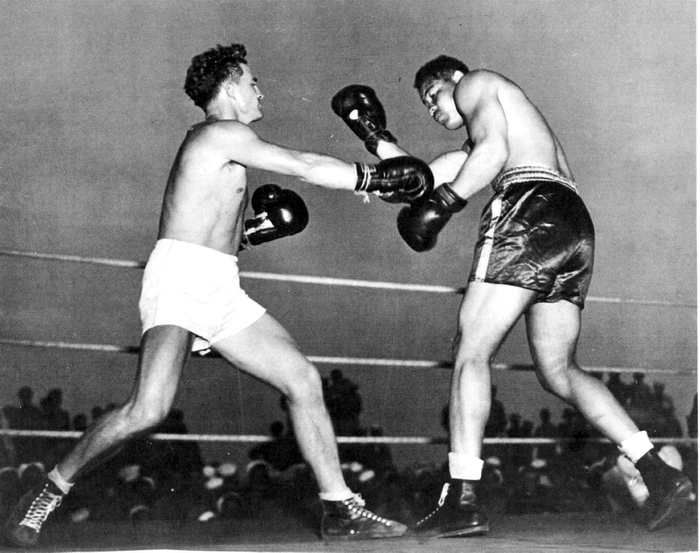 This is a photograph the Post has published before, but it’s worth repeating. Wayne Kennerly saw it recently at breakfast when Ronnie Shoaf of Advance brought it to Wink’s restaurant to share with Harold Earnhardt. Kennerly asked whether he could bring it to the newspaper. The photograph shows a young Harry Welch Sr. of Salisbury, left, in the ring with heavyweight champion Joe Louis. Welch served in the Navy nearly four years during World War II. Known for his fitness, he was mostly an athletic instructor. He served in North Africa, where he helped in building a golf course for servicemen. Welch volunteered to climb in a ring to box Louis in a 1944 exhibition match in Morocco. Welch’s only boxing training was in his Duke physical fitness class. He reportedly ‘went the distance’ and walked away from the ring under his own power. Welch told reporters he got tagged by some lefts but never by Louis’ deadly right hand, probably explaining how Welch emerged with just bruises. Welch, who died in 2006, was a 2004 inductee into the Rowan County Sports Hall of Fame. He was a member of Duke University’s first Rose Bowl team, the Iron Dukes. A tremendous golfer, he also was inducted into the Carolinas Golf Association Hall of Fame. For years, he managed and owned the WSAT radio station. He also was a Rowan County commissioner and longtime chairman of the local ABC Board.