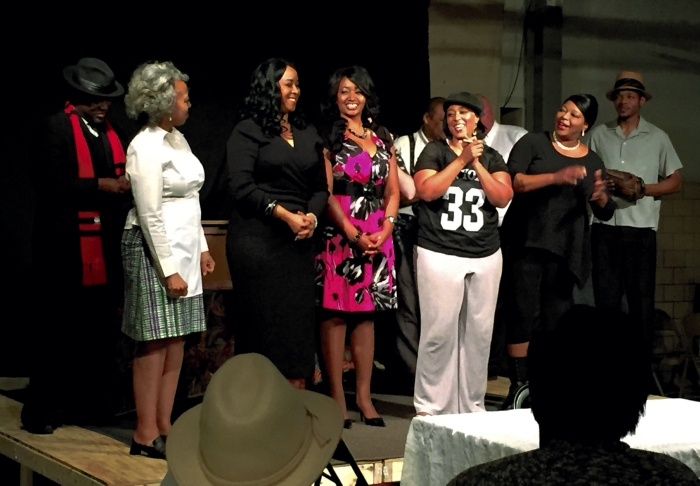 Amanda Raymond/Salisbury Post The cast of "Grand Slam" enjoyed applause from the audience at Saturday night's performance of the play at EastSquare Artworks.

James Jones and other characters had to learn the hard way that the smallest things can have the most control over a life.

“Grand Slam” was performed Saturday night and Sunday afternoon this past weekend at EastSquare Artworks on East Innes Street.

Larry “Syid” Wright wrote the play and Jackie Sanders was the director.

The play was about James Jones, an African American baseball player who plays for the Negro League in 1954. Jones makes some bad deals with the wrong people and has to decide if money is worth throwing a game between the all-stars of the Negro League and the all-white National League, betraying his team and loved ones.

The Renaissance Art Program, an organization that works to integrate arts into education, business, industry and the high poverty and low employment areas of the community, presented the performance.

The play was an honest look at the overt racism experienced by so many African- Americans, as well as how the temptations of the high life can cause a person to lose their direction.

The set was minimal. There were a couple of tables set up to represent different places. When the actors were at one table, it meant they were in a home, while a table behind that one meant they were at the local club. Though the set was not elaborate, the actors made the small space work for them.

For some things, the audience had to use their imagination, like when Bea, played by Jackie Sanders, was cutting an imaginary pie.

The audience also had to imagine a lot of the game the All Stars of the Negro League played against the National League, but that was not a problem. The announcer, played by Larry Kirwan, did an amazing job narrating all of the action. The audience was able to get into the scene and ended up cheering like they were actually in the stands of the baseball stadium.

The scene changes were a little long at times, but that could be attributed to opening night kinks and the fact that there were no stagehands to help move props around.

The songs performed during the play, while I am sure were a great flashback to the music of the times, were unnecessarily long for my taste. Though they helped transition between scenes, I would have liked to get back to the story quicker.

The great acting of all of the performers overshadowed everything else. Two characters who stood out were Fat Cat, played by JoJo Gardner on the first night, and the bartender, played by Kris Miller.

Fat Cat was the man who gets Jones into trouble by funding his gambling addiction and forcing him to consider throwing the baseball game to pay back his debt.

Gardner plays the perfect villain. He plays Fat Cat as a sleezy, sinister and sometimes down right scary character. He laughed in a way that a man laughs when he knows no one can touch him. And though one minute he could be smiling, the next he was slamming Jones down on the table with his hand around his neck. He played the kind of evil character who is sweet enough to draw you in, but frightening enough to have you looking behind your shoulder while walking down the street.

For a character who did not have a name, Kris Miller was unforgettable as the bartender. She was hilarious when making fun of Fat Cat’s arm candy. She did not even have to say anything; when Fat Cat told his woman to sit down somewhere else, the bartender just pointed at the stool, mocking the way she was put in her place. At times, I found myself watching the funny things she was doing in the back instead of the main action of the scene. Miller definitely brought a lot of humor into the play.

Though there were some funny moments, the play was a raw look at the racism and prejudice of the times. The audience heard the white owners of the National League compare African Americans to greedy dogs, and they saw how African Americans were taken advantage of and underestimated in the baseball league.

The play also showed the consequences wrong decisions, like drug use and gambling. Chauncy Miller, who played Big Josh, portrayed well the struggle his character was having with his heroin addiction. I could really feel his internal battle, and the sound of sirens that happened to go by during the scene perfectly added to the drama.

This play gets a seven out of 10 stars. Although the set was sparse and the songs were a little long, the overall acting and story line were superb.