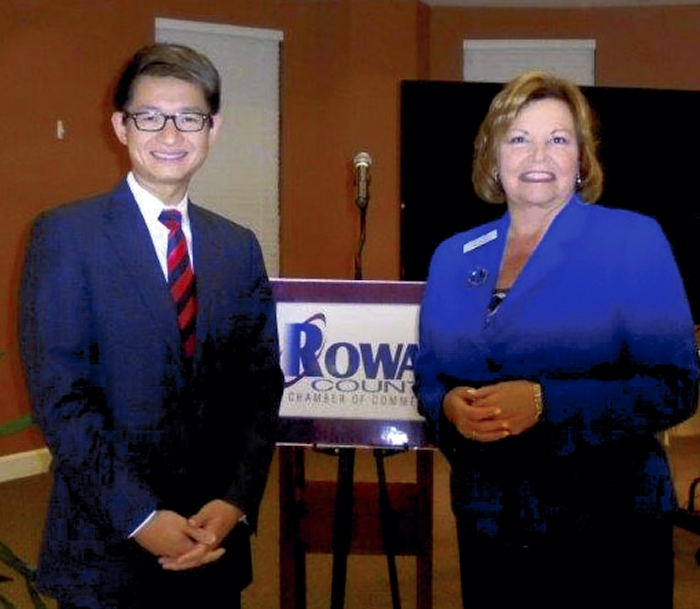 SALISBURY — Christopher Chung, the new CEO of the Economic Development Partnership of North Carolina (EDPNC), spoke with over 150 members of the Rowan County Chamber of Commerce at their Power in Partnership (PIP) breakfast on Oct. 15 at Trinity Oaks. Tony Almeida introduced Chung and was on the search committee that hired him.

Chung became the EDPNC executive in January and held similar state-wide economic development positions in Missouri and Ohio before coming to North Carolina. The EDPNC is North Carolina’s first public-private economic development operation. It’s under contract with and gets more than $17 million a year from the state. But it also gets hundreds of thousands more from private investors.

“All of these companies benefit indirectly when the state’s economy is growing at a healthy clip,” he said. Those investors include Duke Energy, who sponsored the PIP breakfast. Supporters of this concept believe it gives the state more money and resources to go out and attract companies — among other things — without spending more taxpayer money.

In addition to promoting tourism (which is now a $21 billion business in North Carolina), the Economic Development Partnership also promotes the state’s exports and works to attract film and television production.

The next PIP will be on Thurs., Nov. 19, 7:30 a.m. with Tom Barbitta (Cheerwine) as the keynote speaker. Contact the Chamber for information on reservations or sponsorship opportunities at 704.633.4221 or info@rowanchamber.com