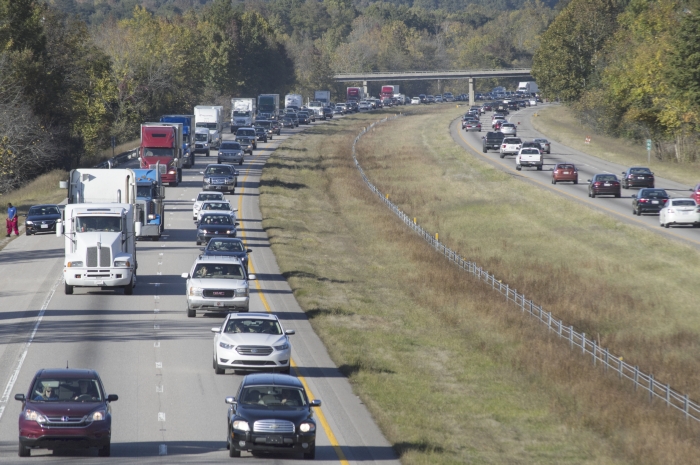 Federal air quality standards may no longer be a hinderance to economic development in Rowan County.

Up-to-date data from air quality monitors across the state shows all of North Carolina, including Rowan, as meeting a stricter standard approved in late September. The same data also shows the Charlotte metropolitan area and the entire state meeting air quality standards. It’s the first time in more than a decade the entire state appears to be in compliance.

Ozone levels are the federal standard in question. Released by motor vehicles and industrial facilities, ozone becomes more severe on hot, sunny days. Ozone plays an important role near the top of Earth’s atmosphere. Near ground levels, however, it causes respiratory problems and other health issues.

Dr. John Wear Jr., director of Catawba College’s Center for the Environment, compared breathing in high levels of ozone to breathing in a mild form of bleach.

Rowan County leaders frequently mentioned Interstate 85 as a reason Rowan County’s ozone levels didn’t meet federal standards. After all, thousands of cars zip across the interstate each day. In southern Rowan County, afternoon traffic often slows to a crawl during rush hour because of a shift from four lanes on each side to two.

Traffic on the interstate could be a factor, Wear said. More realistic reasons for Rowan County’s previous non-attainment designation is the proximity to the Charlotte metro area, prevailing wind patterns and the amount of development that accompanies a major transportation corridor such as I-85.

To be clear, Rowan County residents aren’t breathing in bleach when they step outside. The latest ozone statistics, in fact, show Rowan as the best county for air quality among those with a monitor in the Charlotte region.

All air quality monitors meet an ozone standard — 70 parts per billion — adopted in late September, according to an analysis conducted by the state’s Division of Air Quality. The Environmental Protection Agency, tasked with enforcing the standards, is scheduled to officially determine compliance in Oct. 2017.

“This is the first time that North Carolina has been in full compliance with a new ozone standard at the time it was adopted by the EPA,” said Sheila Holman, the director of North Carolina’s Department of Air Quality. “We expect to comply with the new standard statewide when the EPA makes its final attainment designations in 2017 because air quality has been improving steadily across the over the past 15 years.”

A news release about North Carolina meeting the standard cites declining emissions from motor vehicles, power plants and other industrial sources as a reason for the improvements. Buck Steam Station transitioned from a coal-fired to a combined cycle plant in 2011. Duke Energy provided statewide statistics showing it’s now producing significantly less harmful emissions than in 2005.

The state’s news release said ozone levels in the previous three years across North Carolina have been the lowest since monitoring began in the 1970s.

An initial recognition of the state’s universal compliance, however, came in July. At the time, the EPA recognized Charlotte as complying with the 2008 ozone standard.

Although Rowan appears to meet the federal standards, elected officials were wary a stricter number would negatively affect economic development. In a September letter to The White House, Rowan County Commission Chairman Greg Edds said federal officials should work with local communities to enforce a 2008 standard — 75 parts per billion — instead of implementing a stricter one.

“Rather than strong-arm local leaders by moving the goalposts, the EPA should focus on working with municipalities to fully implement the 2008 standard,” Edds wrote. “At that point we can fully evaluate these regulations and take meaningful steps toward healthier air for our citizens through common-sense, realistic public policy.”

In his letter, Edds cited figures that estimated North Carolina would lose 127,360 jobs and $150 billion in gross domestic product with a 60 parts per billion standard  — noticeably higher than the eventually adopted number. In April, the EPA was proposing a standard in the 65 to 70 parts per billion range.

Even if the EPA set the newest federal standard at 65 parts per billion, Rowan would have been in compliance, according to air quality statistics

Rowan County is technically no longer considered “non-attainment” — a designation that may have hindered the area’s economic development.

Department of Air Quality spokesman Tom Mather said Rowan is now considered “maintenance” instead of “non-attainment.” The change doesn’t mean relaxed regulations, but could make it easier for new industry to locate in an area, Mather said. However, new industries, regardless of location, will still need to meet the most up-do-date emissions regulations, he said.

“These improvements in air quality didn’t happen by chance,” he said. “They happened because controls were in place.”

Mather said it will be a bit easier to meet air quality regulations and in many ways the same.

Didn’t even get the calls

When Rowan was marred by a non-attainment designation, local officials in many ways were unaware of what they were missing out on, according to Rowan Works Economic Development Director Robert Van Geons.

“In the past, we might not even know a certain business was looking to relocate or open a new facility,” Van Geons said. “They would only consider attainment communities. We wouldn’t even get the calls.”

A business might look to Stanly County simply because of Rowan’s designation, Van Geons said. Rowan wasn’t alone, he said. Other non-attainment counties might also not receive calls that others did.

“What they’re literally saying is the exact same technology can go on the other side of a geographic line,” Van Geons said. “The science behind air quality doesn’t follow geographic lines.”

“We don’t know how many people who have never come to us were looking,” Pierce said. “By the time we do have businesses come to us, they’ve already made a decision that there’s not going to be any hurdles in that community that they can’t leap. That’s where we have to be careful because they’ve already overcome a lot.”

The EPA’s air quality limits were a hinderance, but not the most significant one, Pierce said. Instead, he said Salisbury’s various ordinances relating to zoning, signs and appearance hurt economic development more than they should.

Because of the ordinances, he said Salisbury and Rowan County have a negative reputation. It’s one reason county commissioners are pushing for a county-owned water and sewer system.

The bill has attracted significant attention from environmental groups. The groups have criticized the bill as a path for polluters to come to North Carolina.

The Yadkin Riverkeeper, for example, is concerned about provisions that would eliminate protections for almost all types of wetlands and intermittent streams. House Bill 765 would also instruct the Department of Environmental Quality — formerly Environment and Natural Resources — to request the removal of any monitors now necessary to protect public health and the environment.

However, it appears that Rowan County’s lone monitor in Rockwell will stay, according to Department of Environmental Quality officials.