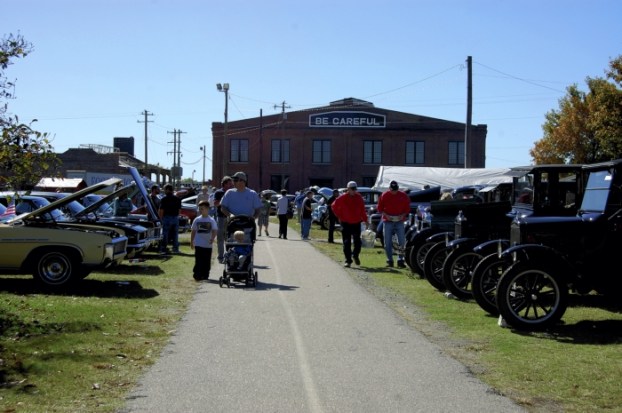 For the love of cars: AACA holds annual car show at Transportation Museum

On a bright and sunny Saturday afternoon, Morgan Mincey, from Hillsborough, sits behind a ’69 Mercury Cougar XR7. This was the first time Morgan and her father, Gene Mincey, have entered the Antique Auto Club of America’s annual car show.

“This was my mom’s high school car and (my parents have) been restoring this car for 35 years,” Morgan said.

Unfortunately, Morgan’s mother could not be there to enjoy the show; she passed away from breast cancer four years ago.

“So my dad actually pushed himself to finish up the car and everything,” she said, “so this year we actually showed it in memory of her.”

Car enthusiasts, like the Minceys, and local community members gathered for the Antique Auto Club of America Annual Car Show at the North Carolina Transportation Museum on Saturday.

The Furnitureland Chapter of the AACA sponsored the event.

Furnitureland is an organization committed to the maintenance, restoration and enjoyment of antique automobiles, trucks and motorcycles, according to their website.

Cars of all makes and models were included in the show, including Karen and Rockey Rozell’s 1977 silver Corvette. The couple from Indian Trail has entered cars in a lot of different shows over the years.

Karen said her husband is working on four cars right now and has five others that they enter in shows.

“He’s always loved them. Since I’ve known him, he’s had old cars,” she said.

“I think it means a lot to people just because, generation-wise, cars today can’t compare to the cars here,” she said. “I think this is kind of like a flashback for people.”

John and Ellen Haring from Hertford entered a 1963 Chevy Impala into the show, a car they have had for 31 years. John said attending car shows is a great way to meet new people.

“It’s a camaraderie of the people,” John said. “Making some new friends, that’s a big part of it.”

For the Harings, the car brings back memories of their younger days.

“This car is sort of a car of our youth. When we were starting to drive, these were the cars that were available,” John said.

Many of the people who entered the show had their work pay off for them by receiving awards at the end of the show.

Morgan Mincey and her father were one of the winners, and were expecting more awards to come while honoring the memory of her mother.

“It’s actually a really good memorial thing for us that we’ve been doing this year,” she said.

The next event to be held at the Transportation Museum will be the Autumn Train Excursion — The Blue Ridge Special on Oct. 31.

Out of Africa: Newlyweds set sights on return to missionary life in Nigeria

SALISBURY — If you describe the July wedding and honeymoon of Chelsea DiLoreto and Benjie Wheeler, it sounds like most unions... read more