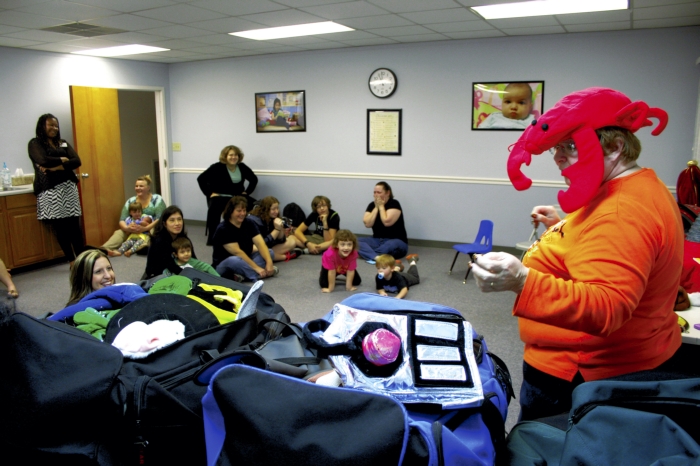 Kim Sheeks is never without her hats, as she showed about 112 of them off at Smart Start Rowan on Wednesday morning. Photo by Susan Shinn, for the Salisbury Post.

Throughout the course of a day, parents may wear any number of hats when caring for their children.

Kim Sheeks used hats to show parents how to tell fun and silly stories on Wednesday, during a workshop on creative storytelling at Smart Start Rowan, attended by some two dozen children and their moms and caregivers.

Sheeks, known as “The Hat Lady,” brought along eight ginormous duffle bags filled with hats, some 112 of them, she said.

Sheeks pulled out hat after hat as she told stories, with the rapid-fire delivery of a stand-up comedian.

By the time Sheeks was done about 30 minutes later, she was surrounded by piles of hats. That delighted the young children who were present, as they dove into the colorful stacks and tried on hats for themselves.

Sheeks had a pink chef’s hat, just like Lucille Ball wore in the chocolate factory episode of “I Love Lucy.” A few of the moms remembered that hilarious episode.

In telling the story of Rainbow Fish, helped along graciously by Mason Brown, Sheeks — wearing a Rainbow Fish hat — said she sometimes burned like a lobster at the beach (accompanying hat, of course), which made her a little crabby (yet another matching hat).

“You did so well!” she told Mason, 4, the son of Amy Brown, Smart Start’s executive director. “Kiss your brain!”

Mason and the other children knew the moral of Rainbow Fish, Sheeks said — when we give of ourselves, we know what true happiness is.

Sheeks, a retired educator, showed the children her first-day-of-school hat: a frog.

“Hop on in!” she always told her young charges. “It’s gonna be a great year.”

With a nod to Piedmont Players Theater’s current show, Sheeks donned a spider-web embellished orange witch’s hat, which played the theme “The Addams Family.” The children loved clapping along to the music.

Sheeks has a whole bunch of Christmas hats too, all of which play Christmas music, all of which she turned on simultaneously, creating a cacophony of holiday songs for the delighted children.

She even had a camel mask, and told the story of the time a camel clamped down on one of her student’s heads at the Lazy 5 Ranch.

She remembered the incident and gave the student a leather camel when he graduated from high school years later.

Sheeks isn’t afraid to tell stories on herself, either. Holding a chicken stuffed animal, she told the story of when her pet rooster got himself stuck on her pantyhose. It was a bit like hearing Garrison Keillor, but on high speed.

Still, Sheeks said, she wouldn’t trade her life for all the tea in China (accompanying silk hat) or all the tacos in Mexico (enormous sombrero).

Afterward, Ella Pressley, 2, loved trying on lots of hats with the help of her mom, Heather.

“We always come to the Smart Start programs,” Pressley said. “We love coming to the playroom.”

Sheeks said she was impressed by the attention of her young audience.

“They were such a good audience,” she said. “They just love trying hats on.”

Burridge added, “Kim showed us how to tell stories using household items. You don’t have to buy a lot of expensive things to have fun.”