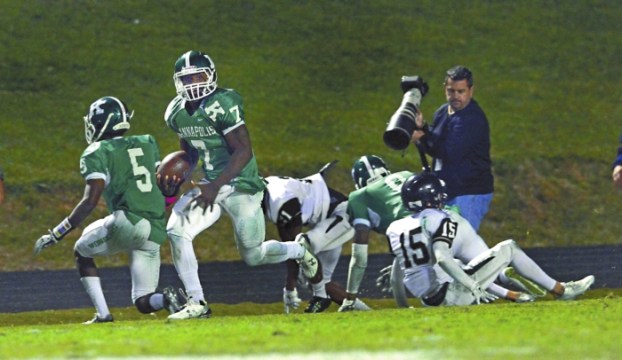 KANNAPOLIS — A.L. Brown coach Mike Newsome grabbed quarterback Damon Johnson after it was over — not to strangle him, but to tell him he loved him and believed in him.
Johnson had one of those negative nights every quarterback experiences sooner or later. Johnson is a big play waiting to happen, but this time he threw four interceptions and lost a fumble. Those five turnovers doomed A.L. Brown in a 21-7 MECKA loss to Cornelius Hough at Memorial Stadium.
Johnson’s tremendous quickness kept plays alive an extra-long time, but it worked against him on Friday. He eventually found trouble when he tried to make that big play to get his team going.
“It happens. It’s happened to Tom Brady and it’s happened to the very best of them,” Newsome said. “That’s just life as a quarterback. You have good days and you have bad days, and there’s always a lot of pressure when you’re the quarterback. Damon thrives on pressure. He’ll come back strong.”
The Wonders (7-1, 2-1 MECKA) will need Johnson to. They play Mallard Creek next week in what amounts to an elimination game in the conference race. Two losses and you’re out because Hough (7-1, 3-0 MECKA) has beaten the Wonders and the Mavericks and is still perfect in the league.
Sixth-ranked A.L. Brown forced one of 10th-ranked Hough’s nine punts on the game’s initial possession, but then the Wonders’ first offensive snap was a pick-six. Johnson fired toward the right sideline, and suddenly Tennessee commit Marquill Osborne was breaking on the ball and heading in the other direction.
“We just struggled offensively,” said A.L. Brown’s electrifying back Jayln Cagle, who was held to 34 rushing yards. “I don’t know what happened. All I know is we have to come back Monday and work harder.”
The Wonders’ defense worked hard enough to win. Hough was held to 11 rushing yards in the first half, and Hough’s accurate QB Jackson Gibbs spent a lot of the first half flat on his back, as Dantrell Barkley, Sandon McCoy, Cincere Allison and Eligah Hall pounded him for sacks.
It was still 7-0 at halftime.
The Wonders finished with eight sacks, including another one by McCoy in the second half.
“It’s not like our defense could’ve played much better than it did,” Newsome said. “That’s a team that beat Mallard Creek last week and we stood in there and went toe-to-toe with them. We played hard and we played tough. Job well done by our defense, and by our special teams, but it’s a full team game and the turnovers we had on offense obviously didn’t help us.”
Cagle returned the second-half kickoff past midfield and a big crowd came alive, but the Wonders promptly went three-and-out.
“Jayln is a fantastic football player and we get the ball in his hands as much as we can,” Newsome said. “We hoped that play would give us a spark, but we didn’t capitalize.”
Allison’s fumble recovery at the Hough 32 midway through the third quarter led to the Wonders’ lone TD. Cagle had a terrific, tackler-breaking run that took the ball from the 17 to the 6-yard line. McCoy, a human battering ram, punched in the TD, and Nate Williams’ PAT made it 7-all.
“That early pick-six hurt us, but we came back to tie the game,” McCoy said. “We got right back in it.”
They were for a while.
“It could’ve gone either way there in the third quarter when it was 7-all,” Newsome said. “It went against us.”
Osborne was the primary problem again. He intercepted Johnson again and his shake-and-bake return set up Hough’s offense at the A.L. Brown for what proved to be the decisive touchdown. Rashad Williams got the touchdown from the 5 late in the third quarter.
Not long after a tip-drill interception of Johnson on the Hough sideline, sophomore bulldozer Jarrett Nagy plowed into the end zone with 6:41 remaining to put Hough in front 21-7.
Brown’s last gasp came at midfield with two minutes left, but Johnson threw incomplete on fourth down.
Hough barely reached 200 yards of offense, but the Wonders, who had been averaging nearly 400 yards per contest, were limited to 186.
“Defensively, we did about all we could, but offensively we shot ourselves in the foot a lot,” McCoy said. “Damon made mistakes, Jayln made mistakes, and I made mistakes. We all made mistakes. But this one is done now. We’ve got to better and we’ve got to move on.”

By Bruce Wehrle For the Lexington Dispatch WELCOME — After last Friday’s 40-6 dismantling by Reagan, you had to think that... read more