Out of Africa: Newlyweds set sights on return to missionary life in Nigeria 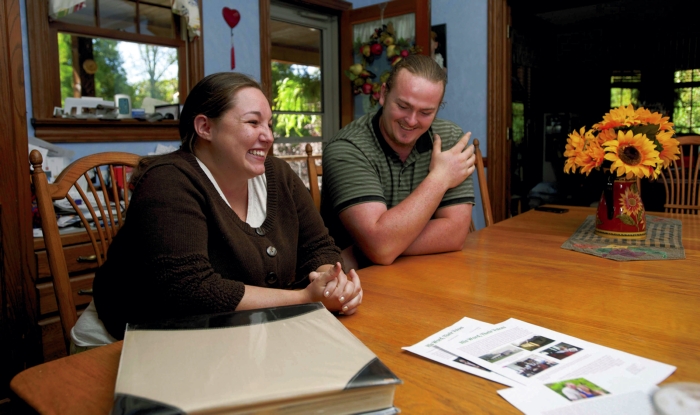 JON C. LAKEY / SALISBURY POST Newlyweds Benjie and Chelsea Wheeler are preparing to return to the Nigeria for their missionary work. Benjie is a 4th generation missionary to the African country where he meet Salisbury native Chelsea Diloreto who was teaching in a village two hours away. The couple are gathering school supplies to carry back to Nigeria to start a school in the village of Ika where Wheeler lives. Thursday, October 15, 2015, in Salisbury, N.C.

SALISBURY — If you describe the July wedding and honeymoon of Chelsea DiLoreto and Benjie Wheeler, it sounds like most unions of men and women here in the United States.

They had the wedding and reception at The Arbors in western Rowan County. Chelsea’s father, David, gave her away. Family and friends attended from scattered places. One of Benjie’s sisters even brought her 3-week-old baby.

Someone tagged balloons to the couple’s Mazda getaway car and wrote “Just Married” in shaving cream all over the windshield.

After the wedding, the couple took a trip to Charleston, S.C.

But the back story and what’s ahead for Chelsea and Benjie Wheeler are much different than what you might find with most couples. Their past and future are tied directly to Africa — villages in Nigeria, to be more exact — and they wouldn’t have it any other way.

Chelsea Wheeler has spent two sustained periods over the past five years teaching at an orphanage school in Otutulu, Nigeria, as part of her participation in the Liebenzell USA mission organization. Her passion for Nigeria began as early as 2006 and 2007, when she spent two weeks each year visiting her cousin Crystal Gosnell, a longstanding employee at the Ministry of Mercy Orphanage.

While she was teaching first grade at the orphanage, Chelsea also looked after many of the children — 10 kids under the age of 8 were living in the same house with her and Crystal.

A fourth-generation missionary in Nigeria, Benjie Wheeler lived about two hours away from Otutulu, working at his family’s Ika Mission Station, which has a Bible School, a printing press, a church, staff houses and his mother Lois’ hospital.

Thanks to things he learned from his father, Thomas, Benjie handled construction and maintenance issues at the hospital in Ika. Sometimes he also was called over to the orphanage where Chelsea worked to fix things such as generators and the internet connection.

A quick romance bloomed between Chelsea and Benjie, leading to this summer’s wedding in the States. Now the couple are raising funds and supplies to return to Africa and establish their permanent home and careers there.

Chelsea plans to start a school for local children in an abandoned missionary house on the Wheeler family’s compound. She will begin with a preschool, with hopes of expanding to six grades as funding and resources allow.

Benjie will return to his jack-of-all-trades abilities for the IKA Mission Station, but his main job will put him in its translation office, working the press in the print shop and publishing Bibles, study materials and other books in Igala, a language he speaks fluently.

Being able to print things on site significantly reduces the costs for the Nigerian farmers.

Both of their jobs will fall under the auspices of the Liebenzell USA mission, a religious-based organization. Their planned ministry will require $1,800 a month in support, which does not include the travel costs they face in getting back to Nigeria.

Chelsea says she knows it sounds like a significant amount of money, but much of it goes toward taxes, health insurance, work funds and other requirements of the mission.

“Only 38 percent of this goes to our direct expenses,” she adds. “From this we pay for housing, groceries, gas for our generators, our future children’s education and many of the incidentals of the ministry such as school books, desks, ink and parts for the printing press.”

The Wheelers have received many contributions in school supplies and materials from North Hills Christian School and First Assembly Christian School, both of which 27-year-old Chelsea attended growing up.

Those supplies fill the garage at the Rowan County home of Chelsea’s parents, David and Faythe DiLoreto. The Wheelers have been staying on the DiLoretos’ Fading D Farm until they can return to Nigeria.

But the school materials present another challenge — the cost of getting them shipped to Africa. The cheapest way, though it’s hardly inexpensive, is to purchase a shipping container, which will cost about $15,000. About $10,000 of that cost results from Nigeria’s high import tariffs.

So the Wheelers have significant financial hurdles in front of them.

Benjie’s courtship of Chelsea was not typical, to say the least. Chelsea thinks she first set eyes on Benjie during her first eight-month teaching gig in 2010-2011. They saw more of each other on her second teaching assignment, when Benjie had a motorcycle for the tough back-country roads and could get to his jobs at the orphanage more regularly.

But it wasn’t until this past Christmas and New Year’s holidays, when Chelsea accepted the Wheelers’ invitation to spend some time in Ika, that she got to know Benjie better. It helped that Benjie was laid up, trying to deal with a hernia and an appendix that had to be removed.

“He wasn’t running away all the time,” Chelsea says. The couple did a lot of talking during Chelsea’s stay, and their  conversations continued online at night, as long as generators at the orphanage were turned on. They also saw each other when Benjie would travel to the orphanage to repair something.

Benjie soon sent an email to David DiLoreto in Salisbury asking the father’s permission to court Chelsea. DiLoreto answered back that Benjie had his OK. Within a couple more weeks, Benjie was seeking DiLoreto’s permission to marry his daughter.

That answer took a bit longer, but by March 14, the couple were engaged. By June, they had  traveled together to the States and had roughly a month to plan a wedding. Much of that work fell on the shoulders of Faythe DiLoreto and Chelsea’s sister, Marissa.

It is only the second time in his life the Nigerian-born Benjie has been in the United States, where all five of his older siblings now live.

As a 13-year-old, Benjie traveled to this country for a brother’s wedding. He remembers the feeling he had on returning to Nigeria after that first trip.

“Yeah, that was nice,” Benjie said to himself and others, “but this is where I belong.”

He made it clear to Chelsea in their courting stage that his heart would always live with Nigeria, and that’s where he planned to stay. Chelsea was fine with that. In fact it was especially difficult for her to leave her school children in June, particularly an infant she had “adopted.”

Chelsea had fallen for a little girl named Aminetu, who turned 1 in February. The closest Western description for their relationship is that she is a foster child, Chelsea says, because the government will not allow a person of her foreign background to adopt a Nigerian.

At the orphanage, Crystal has been looking after Aminetu while the Wheelers have been in the States getting married and raising funds for their return trip. What the future holds for the Wheelers and Aminetu is up the air. Chelsea says she will be allowed to visit the little girl on the last Saturday of every month, but if the avenue ever opened up for Aminetu to live with the couple, they would welcome the opportunity to raise her.

The Wheelers’ dating period and engagement also was atypical to what most Westerners are used to because they were seldom allowed to be alone with each other, due to expectations in Nigerian culture. Their first meal alone together, for example, happened during their honeymoon.

Benjie’s great-grandfather Raymond Dibble and his wife went to Nigeria as missionaries in 1921. In 1952, the family received land outside of Ika on which to establish their mission station.

Spencer Dibble — Benji’s grandfather and his mother’s father — returned to the United States and served in the U.S. Coast Guard before taking his family back to Nigeria.

Lois Dibble took off for Canada after high school, became a registered nurse, married Thomas Wheeler and the couple moved back to Lois’ home in Ika. Their hospital includes one of the most successful tuberculosis wards and treatment follow-up programs in Nigeria. It also is the only hospital within a great distance to have anti-venom treatment for snakebites.

Chelsea says the vacant missionary house in which she hopes to have a school has holes in the roof and floors and is missing some doors and windows. But it rests on the side of the hill and will offer a quiet setting for learning, she says. Benjie will do much of the work in making it school-ready.

While Thomas Wheeler’s obligations at the mission station forced him to stay home, Lois Wheeler traveled to the United States in time for the birth of a daughter’s child and her youngest son’s nuptials.

All five of Benjie’s siblings were able to attend the wedding and serve as bridesmaids and groomsmen. It was the first time in 15 years the six Wheeler children were together in one place.

Things are definitely different here for Benjie than what he has grown up with in Nigeria as part of a missionary family. He often has to make the tools he needs for specific jobs back home. Or if a part breaks in a vehicle there, it’s a two-and-a-half-hour drive to a city where you hope to find a part that can be adapted for what you really need.

In this country, you drive to a place such as Harbor Freight to find a tool or stop in at an auto parts store for the exact item your vehicle needs.

“It is something I could get used to,” Benjie says, “but I know I shouldn’t.”

Roads here, he adds, are “a wonderful expressway,” compared what he routinely navigates between Nigerian villages.

As they try to raise support and make plans for their return, the Wheelers are finding ways to help out on the Fading D Farm, and Chelsea also is working at the North Hills Christian School daycare. But getting back to Africa remains their driving passion.

Those interested in making a donation to the Wheelers are being asked to send a check to Liebenzell USA, with “Chelsea and Benjie Wheeler” on the memo line. The mailing address for Liebenzell USA is P.O. Box 66, Schooley’s Mountain, NJ 07870. You can also make a donation online at http://mission.liebenzellusa.org/give/online-giving. Select either the “one-time gift” or “reoccurring gift.” Also select “people” in Category and “Chelsea and Benjie” in Fund. Donations are tax deductible. Contact Mark Wineka at 704-797-4263, or mark.wineka@salisburypost.com.