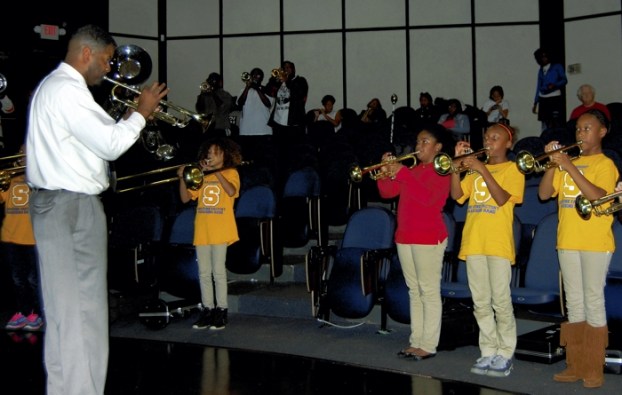 On Tuesdays and Thursdays, band members gather at Livingstone College for practice.

Director of Bands Anthony Jones helps teach music to the students in a disciplined manner.

“Horns at the ready,” Jones says, signaling the students to get ready to begin playing the song they have been practicing, “Black and Blues.”

“Up,” the kids say, flicking their instruments up into a playing position in one, unified motion.

Jones is not practicing with the Livingstone band; he is working with an elementary and middle school band.

The Mini Funk Factory Marching Band will now be practicing at the Tubman Little Theater on the Livingstone College campus.

The band used to practice at the Salisbury City Park facility, but after rekindled communications between Anthony Johnson, the Mini Funk Factory Marching Band director, and Anthony Jones, the Mini Funk band will now hold their practices at the college.

The kids meet in the theater twice a week to practice their music and marching. Since they are now at Livingstone, band members from the Livingstone marching band, the Marching Blue Thunder, come to help out.

And it is not just about music. Johnson said he wanted to emulate the discipline of Southern University’s drum line, called the Funk Factory.

“We wanted to be miniature versions of their drum line, which is very disciplined,” he said.

During the practice, Jones encourages uniformity in appearance and sound.

The band members were engaged for the whole hour. They were asking questions to make sure they could play their parts and answering the questions Jones asked of them.

One band member even got a reward for knowing why the band always starts on their left.

Jones said he loves teaching children, and actually travels around the country to different music camps during the summer.

“If we don’t start them early, they’ll mess up later,” Jones said. “We have to guide them, and that’s our job as educators, teachers.”

Natasha Freeman, parent of band member Alexia Hernandez, said a music program like this is good for children to be involved in.

“It gets them prepared and ready and gets them interested in stuff before they get into the middle school,” she said.

Johnson said the move to Livingstone works out for the band members because it is closer to where they live.

“A lot of kids can now walk to band practice,” Johnson said.

And working with college students is a great opportunity for the kids, Jones said.

“I wish I would have had a chance to work with college kids when I was in third grade,” he said.

According to Johnson, the band started in 2010 as a drum circle to help at-risk students at Overton Elementary. Johnson, founder of the group, thought being involved in music would help the kids with concentration and focus. A few weeks later, the group ended up with 45 members. Johnson transformed the group into a marching band in 2011.

Johnson said he did not like school when he was younger, but music kept him involved.

“The only thing that kept me in school as long as I did was music,” Johnson said.

The band has played at homecoming events, parades, half-time shows and other events.

Johnson said he wants to give the students of Rowan County the same music opportunities he had.