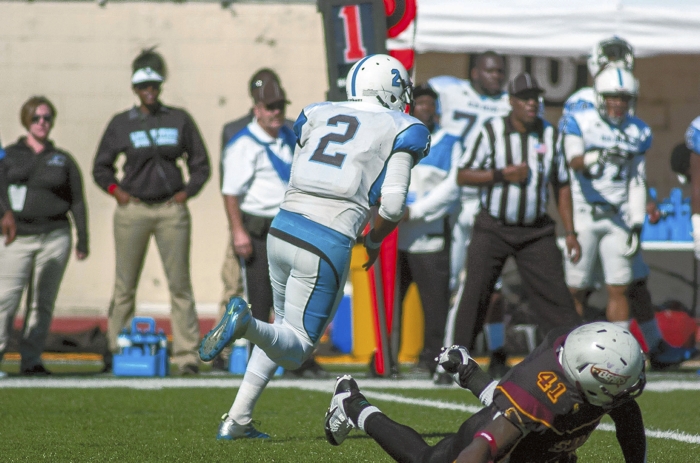 Photo courtesy of Donald Watkins... Livingstone quarterback Drew Powell (2) turns the corner for a gain against Shaw on Saturday in Durham. Powell collected 137 yards rushing and another 209 passing in leading the Blue Bears to a 41-22 win.

Needing to beat a winless Shaw team in order to stay in good standing in the CIAA’s Southern Division, Livingstone could not have gotten off to a worse start Saturday afternoon at Durham County Stadium.

Then the Blue Bears took a deep breath and went to work, reeling off 41 unanswered points en route to a 41-22 victory.

Down early, 14-0, Livingstone fought back with two touchdowns in the second period, although a missed extra point left the deficit at one point.

Shaw’s Marquise Grizzle returned the ensuing kickoff 80 yards and eight plays later, the home team was sitting at the two-yard line, ready to increase its lead.

Then the Blue Bears got a huge, game-changing break.

Quarterback Terrence Shambry fumbled the snap and Livingstone defensive lineman Armond Cox scooped up the loose ball and rambled 98 yards the other way for the go-ahead score. The 6-3, 240-pound freshman had blockers around him but as head coach Daryl Williams described later, “it’s a good thing that the field is only 100 yards long.”

After the amazing turn-of-events, the Blue Bears didn’t look back as senior quarterback Drew Powell led an offensive attack that piled up 439 total yards. Meanwhile, the defense held the stunned Shaw Bears to 193 total yards.

Livingstone improves to 3-2 overall and 2-2 in the CIAA, but 2-0 in the Southern Division. The Blue Bears have three straight home games coming up, all against stout competition in the division — Winston-Salem State, Fayetteville State and Johnson C. Smith. Shaw falls to 0-7 and 0-4.

“I can’t say enough about the total team effort today, especially on the defensive side of the ball,” said Williams. “After a slow start, the defense had the big fumble return that turned the game around and ended up with four pass interceptions.

“We’ve made some changes on defense in recent weeks and the guys have accepted their roles without complaint and have gotten better and better,” continued Williams.

On offense, despite some early penalties, Powell led the Blue Bears up and down the field from the start of the second period on. Livingstone had scoring drives of two, six, eight, 10 and 12 plays, to grind out the win.

Powell ran for 137 yards and two touchdowns and passed for another 209 yards and two more scores. He said that a lot of the rushing yards were by design and not from scrambling.

“First of all, the offensive line did a great job all day, both run-blocking and in pass protection … I mean, sometimes I had five or six seconds to find receivers and that’s awesome,” said Powell. “But we had a plan for me to run today. We spread the defense out and took advantage of the middle of the field, where they basically had just one linebacker to worry about.”

Down 14-0, running back Latrell Flowers lined up as a receiver and got lost in the Shaw pass coverage. Powell said he had plenty of time to find the wide open Flowers for a 16-yard scoring pass with 12:27 left in the first half.

Two plays later, Shambry fumbled at his own five-yard line and Livingstone’s Billy Moore recovered at the 2. Powell took it in from there, but kicker Leonardo Manzo’s extra point was no good.

After Cox’s big fumble return for a touchdown, the Livingstone defense forced a punt on Shaw’s next possession. Powell led a quick two-minute, 40-yard drive that culminated with a six-yard TD pass to Flowers, just 35 seconds before halftime.

In all, it was a 25-point second quarter for Livingstone.

Shaw’s first possession of the second half saw a decent drive before running back Travis Lock was hit by Livingstone’s Marcus Nolan and fumbled. Todd Finney recovered at the LC 37-yard line.

Powell then took the Blue Bears down the field in 12 plays and scored himself from seven yards out. It was 33-14.

LC went up, 41-14, just six seconds into the fourth period on a 7-yard run from Jarius Richardson and a two-point conversion, Powell to Arthur Bowden.

Shaw tacked on a touchdown in the game’s final minute on a 14-yard run by Shambry. By then, Livingstone had a lot of subs playing on defense.

Richardson followed Powell in the rushing totals with 49 yards on 12 carries. Flowers added 27 yards on the ground to his two touchdown receptions.

Statistically, Livingstone star receiver Jalen Hendricks had a quiet day with just four catches for 35 yards, but Powell said that his fellow senior was still a key to the offense.

“Shaw’s defense covered him (Hendricks) well, which left someone else open,” said Powell. “And Jalen did a good job blocking all day. He still had a big impact on the game.”

Defensively, Jarius’ twin brother, Jarod Richardson, a safety, led the Blue Bears with 11 tackles, eight of them solo stops. Moore and Jamaul Brown had seven tackles each and Gregory Hines followed with six.

In addition to his fumble recovery, Moore also had an interception. Finney, Danny Robinson and Kevin Williams also had pass INTs.

Williams believes that that facing the early adversity can only help his team.

“It was a rough start, but nobody panicked,” said Williams. “Once we got that first touchdown, it was like, OK, there’s a lot of time left, so let’s stick with the plan. The guys continued to play hard and soon, we had the momentum and continued to play well throughout the game.”

And the 98-yard fumble return, possibly a school record, didn’t hurt either.

“Yes, that was a turning point, for sure,” added Williams. “It was nice to see that young man make that play. That’s the kind of thing that’s happened to us in the past.”

The Blue Bears host Winston-Salem State in a big game next Saturday at 1 p.m.