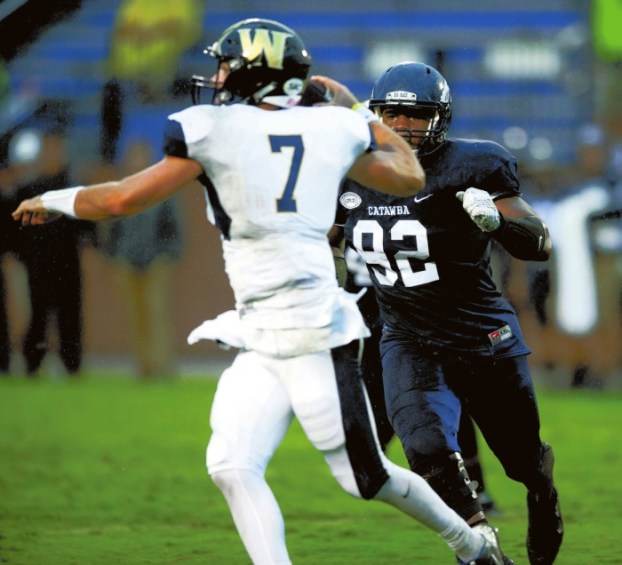 Catawba goes for third straight win against Lions at home

SALISBURY — Mars Hill’s Lions have the more productive offense, while Catawba’s Indians have a stingier defense.
That means today’s 1:30 p.m. South Atlantic Conference game at Shuford Stadium may be decided by the third phase of football operations — special teams.
One of the athletes capable of making a play for Catawba on special teams is East Rowan graduate Joshua Moses, a 6-foot-3, 205-pound sophomore.
Moses made an impact at East for the football, basketball and track programs, but Catawba head coach Curtis Walker was caught by surprise by his ability when he came out for the team as a walk-on last spring.
“Moses quickly made a name for himself at spring practice,” Walker said. “He showed us how hard he’s willing to work and he showed us he could help us on special teams.”
While he could become a factor at outside linebacker as his career unfolds, special teams are Moses’ thing for now. He’s on most of Catawba’s special-teams units.
“A guy who is on multiple special teams is on the field a lot and is as important as a starter on offense or defense,” Walker said. “He’s been a valuable addition.”
When he graduated from East, Moses planned to play football for Shaw University in Raleigh. That didn’t work out, but he’s found a home at Catawba.
“Catawba is where things felt familiar and comfortable, and it’s where I wanted to go to school,” Moses said. “I’ve got a lot of friends here like (former East Rowan Mustang) Donte Means.”
•••
Catawba seeks its 500th victory as a program today, and the last month has taken fans back to the days of leather-helmet football.
When the Indians (4-2, 2-1 SAC) won 10-3 at Limestone last Saturday, it marked the fourth straight game in which neither Catawba nor its opponent managed to score 20 points.
Catawba’s defense ranks 36th among Division II schools in fewest yards allowed and is tied for 16th in scoring defense (17.5 per game). Outside linebacker Jamal Lackey (46) and inside linebacker Michael Peppers (40) are the leading tacklers. Outside linebacker Kyle Kitchens and Peppers have combined for seven sacks.
“Everybody on defense is on the same page,” said end C.J. Barksdale, who has four tackles for loss.
Extraordinary defense has been necessary because Catawba’s offense ranks 148th out of 169 D-II schools with a meager 277 yards per game.
Part of that struggle can be credited to the opposition. Catawba’s losses have been to teams (West Georgia and Wingate) that rank in the top five nationally in fewest yards allowed.
Left guard Quinzavious Sands will be a player to watch when Catawba has the ball. He’s a redshirt freshman, and the Indians see him as the anchor for the offensive line for years to come.
“Sands is one of those three-play guys,” Walker said. “We watched him for three plays and we were ready to offer a scholarship. He’s aggressive and he’ll get after it until the echo of the whistle.”
While Catawba has become accustomed to defensive struggles, Mars Hill (2-4, 1-1) would love to turn today’s game into a shootout. The Lions have topped 30 points three times and average more than 400 yards per game. If they get 30 today, it will be a challenge for the Indians to keep pace.
Mars Hill’s defense has been one of the nation’s weakest statistically (149th, 465.2 yards per game allowed), although the Lions figured a few things out last week when they won 17-13 at Newberry.
Mars Hill will come to Salisbury with confidence. The Lions took advantage of a string of turnovers and whipped Catawba 35-7 in the mountains last season.
Mars Hill’s veteran coach Tim Clifton will be leading the Lions against Catawba for the 23rd time. He’s 6-16 against the Indians.
“You know what you’re going to get from Coach Clifton and Mars Hill, and that hasn’t changed,” Walker said. “They like to run the ball and they want to hit big pass plays off play-action.”
Mars Hill rushed for 264 yards against Catawba last season, so stopping the run will be paramount for the Indians on Saturday.
Mars Hill QB Matt Layman ranks second in the SAC in passing with 781 yards.
Walker identified receivers Keshaun Taylor and Gilbert Johnson as the most dangerous Lions. Taylor has scored eight touchdowns and averages 102 receiving yards per game.
Catawba leads the series with the Lions, 29-24.