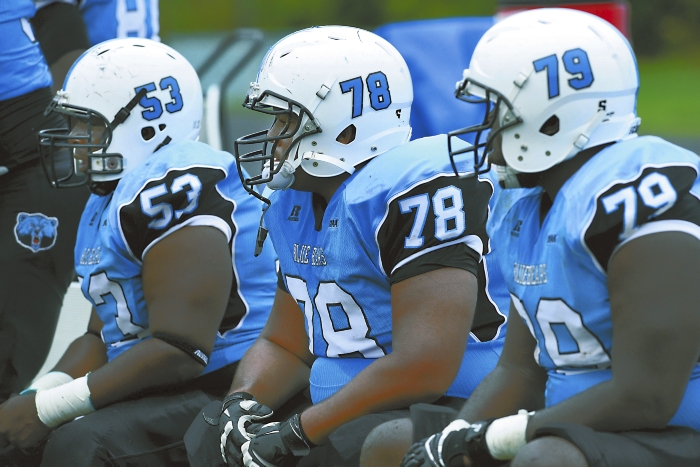 Wayne Hinshaw/for the Salisbury Post... Livingstone’s offense linemen Shaquelle Sharperson (53), Herbert Jefferson (78) and Michael Green (79) will be counted upon today as the Blue Bears take on Shaw in Durham.

SALISBURY — Livingstone’s Blue Bears play at Durham County Memorial Stadium today and how they do will be the first step in returning there on Nov. 14.

That’s the date of the CIAA football championship game, pitting the Northern and Southern division first-place teams. Livingstone is 1-0 in the division, following last week’s 31-7 victory over winless St. Augustine’s.

The Blue Bears face another winless team at 1 p.m. today in Shaw, and moving to 2-0 in the division would be huge, as Livingstone’s last three games will be at home — against Winston-Salem State, Fayetteville State and Johnson C. Smith.

“This game is so important because a win on Saturday will set us up where everybody has to come through Salisbury to get to Durham,” said Livingstone coach Daryl Williams. “This is the biggest game of the year because if we take care of business, (we’ll be undefeated in the division) with everybody else coming to our stadium.”

Today’s game will be the 32nd meeting between Shaw’s Bears and Livingstone’s Blue Bears. Shaw leads the series, 18-11-3, but Livingstone won last year in Salisbury, 21-20.

Livingstone is 2-2 overall and 1-2 in the CIAA, with the two losses coming to Northern Division teams Bowie State and Elizabeth City State. Shaw is 0-6 overall and 0-3 in the conference. Last Saturday, Shaw lost to Fayetteville State, 36-29.

Against St. Augustine’s last week, Livingstone may have played its most complete game of the season, churning out 358 total yards with no turnovers, despite playing in a light rain. The defense held the Falcons to just 13 yards rushing and a total of 205.

“It was a total team effort but I was really excited and happy for the defense,” said Williams. “I think this was our first time getting three or four fourth down stops in a game and we also had two interceptions. And I think our defensive line played about the best that I’ve seen since I’ve been here (three seasons).

“On offense, we ran the ball well, Drew (QB Powell) was effective at 15 for 20 passing and we didn’t have any turnovers,” continued Williams. “That’s our formula for success — stopping the run, staying ahead of the chains and not turning the football over.”

Livingstone senior receiver Jalen Hendricks had another big day last Saturday, catching nine passes from Powell for 141 yards and three touchdowns. Hendricks was named CIAA Receiver of the Week for that effort.

Livingstone’s offense averages 406 yards per game, third-best in the CIAA. The Blue Bears are also averaging 26 points per game. However, on the down side, the team is averaging 100 yards per game in penalties.

“We’ve got to get the penalty situation under control,” said Williams. “We had an unsportsmanlike conduct penalty and we roughed the punter. Our kids are going hard, but there’s a difference in going hard and doing things that hurt the team. It seems like every time we have a big run, somebody holds, so they are effort mistakes, but still, we have to be smarter and we, as coaches, have to teach it better.”

The Blue Bears rank second in the conference in rushing (224 yards per game) and last week, running back Jarius Richardson picked up 94 yards on 23 carries. Latrell Flowers followed with 60 more yards on 16 attempts.

Terrence Shambry made his debut at quarterback for Shaw last week against FSU, throwing for 215 yards and four TDs. Still, after six games, Shaw is ahead of only St. Augustine’s in scoring, averaging just 13.5 points per contest.

Despite those statistics, Williams is not allowing his team to called the favored team today.

“This program as been down for so many years, we’re not going to say that we’re favored to win this game or that game because we haven’t done it yet,” Williams explained. “We haven’t won a significant game that counts since I’ve been here, so we don’t have any room to take anybody lightly.

“We’re tops in turnovers and penalties,” he continued. “We can’t reach our goals playing like that, so I’ve got to do a better job in getting the team to understand that fact.”

Powell rushed for 82 yards and passed for 267 and two scores to help Livingstone overcome a 222-yard rushing day and two TDs from Shaw running back Marquise Grizzle.

Grizzle is back for Shaw this year but averages just 32 yards per game. Livingstone’s Richardson ranks fifth in the CIAA with 79 rushing yards per game. Powell ranks fourth (182 yards) in passing in the conference while Hendricks leads all receivers (106).