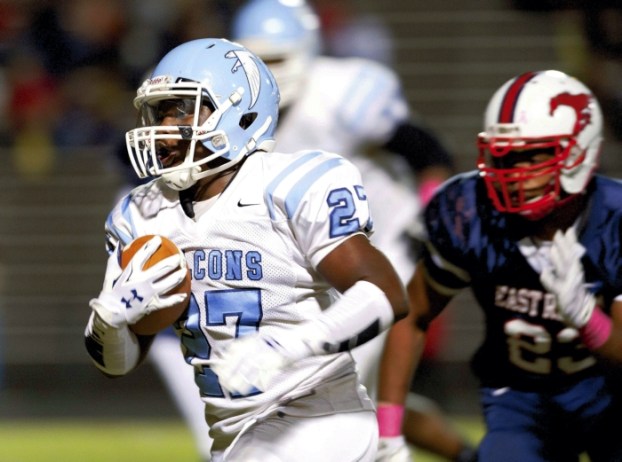 On the way to a win “We showed the world what we can do,” exuberant sophomore Devin Turner said after West (7-1, 6-0) crashed East’s homecoming party and stretched its winning streak to seven games. “Now they know.”

East certainly does. The Mustangs (2-6, 1-5) were limited to six first downs, 102 total yards and were forced to punt seven times. “It was what we expected,” said East junior back Max Wall. “They were bigger than us. They flew to the ball. They were better, but we can play as good as them.”

No one was better than West quarterback Kacey Otto and wideout Kortez Weeks. They’ve emerged as the county’s hottest couple after hooking up twice for pivotal touchdowns.

“We just have a good feel for each other,” said Weeks, the junior who made eight receptions for 117 yards and reached the end zone in the second and fourth quarters. “But it’s not just us. Our whole team came to play tonight. We were physical and we were fast.”

Otto, who celebrates his 18th birthday today, passed for 183 yards and three TDs and rushed for another 75 yards. But instead of singing his song from the rooftops, he credited West’s beefy offensive line and the diligent work his receivers have put in.

“All of them stay late once a week after practice, just working on timing and routes,” Otto said. “They’ve done a great job translating that to the games. And the OL, it’s such a key part of our passing game. They get in front of the defense and give me the time I need to make a play.”

Otto completed his first two passes as the Falcons advanced to the East 34-yard line on their first possession. They went ahead, 7-0, when sophomore Martavio Rankin (15 carries/81 yards) found a seam on the left side and scored on an 18-yard run midway through the first period.

Instead of brooding, ER’s response was immediate. The Mustangs tied the score two snaps later when Keith Tillman took a handoff from quarterback Tate Houpe and galloped 55 yards on a draw play up the middle.

“Our kids showed resilience,” said losing coach Kenneth McClamrock. “We had players making plays. It was that simple. The offensive line set it up for him, he got through the crease and we were able to score.”

It remained tied until Otto — who completed eight passes in the second quarter — found Weeks on a 9-yard crossing pattern with 4:48 remaining in the first half. “Coach (Joe) Nixon called a slant and told me to get open,” Weeks said. “I ran my route to perfection.”

A third-quarter touchdown pass to Juwan Houston capped a 74-yard, eight-play drive to open the second half. And West salted the game away on the first play of the final period, when Otto fired a 26-yard TD to Weeks on a skinny post pattern. “That last one we just drew up on the sideline and it worked,” Otto said.

The rest was up to West’s defense. It recorded three sacks, forced two turnovers and held East to 32 yards in the second half.

“We’re a little under-rated,” said Falcons’ DB Daquan Byrd. “We were hoping, getting on TV, we could make a statement here. So we came out and put it in.”