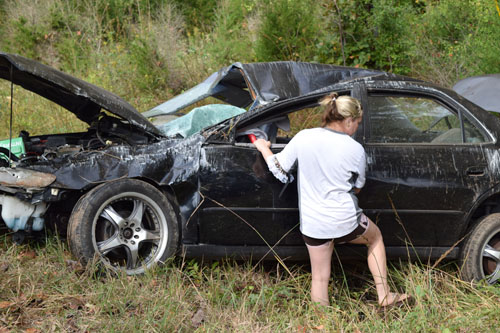 Rebecca Rider/Salisbury Post Samantha Hampton, wearing the garter that was to be used in her Saturday wedding, inspects the car of her fiance, James Gallimore, who suffered serious injuries in an accident on Miller Chapel Road Friday morning.

James Gallimore, 26, was seriously injured in an accident near the 1400 block of Miller Chapel Road Friday morning. Highway Patrol First Sergeant Bell said that Gallimore veered off the road to the right and the car flipped two or three times, ejecting Gallimore from the vehicle.

Vickie Yates lives across the street, and heard the crash. She says she told her husband to call 911 while she went outside to see what had happened. She found Gallimore lying on the ground. He was alert and able to speak, she said.

“I just tried to talk to him till help got here,” Yates said.

She said that Gallimore told her he lived just over the rise of the next hill, on Sycamore Lane, with his fiancé, Samantha Hampton. He said they have two children, and they were getting married today. Then Gallimore gave her Hampton’s number and asked Yates to call her.

Hampton arrived to a grim scene, the car crumpled and everything in it spilled out over the sloped shoulder where the car came to rest.

“He was lying on the ground when I got here,” she said.

Hampton said that she hadn’t been allowed to talk to Gallimore, but that Yates told her what happened. Hampton says that Gallimore works hard, and that they were supposed to get married this morning.

While they waited to hear about Gallimore’s condition, Hampton and her mother picked through the items scattered near the edge of the road: Gallimore’s clothes, cut off by EMS; a subwoofer, a box of tools and a wedding garter.

According to Bell, Gallimore was flown to Wake Forest Baptist Medical Center. His condition is unknown.

Nothing, not even mental illness, can stop a person from succeeding in life, according to the keynote speaker at Thursday’s... read more