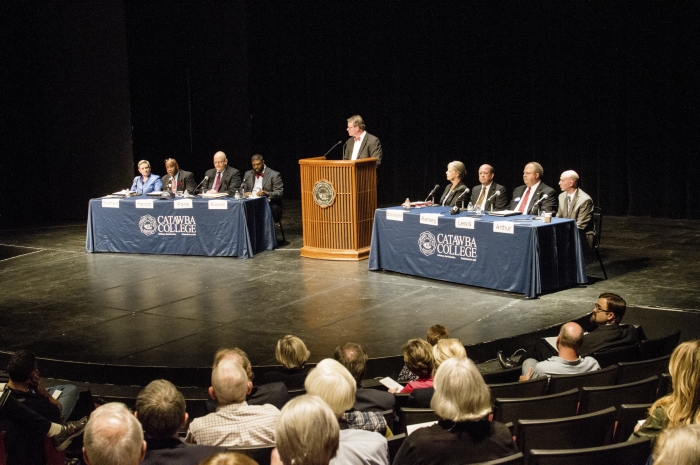 Composition of the candidate groups drove the content of discussions Thursday during a Salisbury City Council forum at Catawba College.

Groups were decided by a random drawing weeks before the forum.

Though similar, question topics weren’t identical between the first and second forum. A more significant reason for the difference, however, was the composition of the two groups. The first group included fewer incumbents or candidates with prior experience on the council.

Thursday’s forum was the most well-attended of any to date. Catawba’s Hedrick Little Theater was packed with about 200 people at one point.

Shortly after introductions were over in the first forum group, two candidates — Arthur and Paris – mentioned the idea of firing Salisbury Police Chief Rory Collins. As the only incumbent on stage, Blackwell at times addressed claims by challengers. She said city council technically wouldn’t have the ability to fire Collins.

Questions asked of the first group included a focus on crime, funding city government and attracting businesses to downtown.

In his comments, Arthur repeatedly focused on stating that top-tier families in Salisbury are making major policy decisions. He said that practice needs to stop. Arthur characterized himself as a representative of common Salisbury residents.

When asked about crime, Arthur said Collins needs to be fired. He also said Salisbury needs to focus on community policing and the need to raise pay for officers. Arthur attributed turnover rates at the Salisbury Police Department to pay.

Next, he was asked about raising taxes. Arthur said he wouldn’t be in favor of raising taxes unless it was “100 percent necessary.”

Blackwell’s response on crime came directly after Arthur’s. One of her first statements during the allotted time focused on the fact that city council doesn’t have the authority to fire the police chief.

Continuing, she pulled out a spreadsheet of the city’s properties. The assessed value of all property was $56 million, Blackwell said.

She questioned how Salisbury might be able to add funding to the police department’s budget and proposed selling off non-essential pieces of property to help fund budgetary increases. Just a small amount of the total $56 million would make a significant difference, she said.

Like others who were asked about raising taxes to fund increases in city government expenditures, Blackwell said it wouldn’t be necessary. While Blackwell has been on the council, however, the city has raised its property tax more than a revenue neutral rate.

When asked about boosting economic development, Blackwell mentioned Salisbury’s Complete Streets Plan, which aims to make the city more pedestrian-friendly. She also said local landlords need to be held accountable for maintenance of buildings. In some cases, landlords don’t make repairs and businesses rotate through buildings frequently as a result.

When asked about crime and gang violence, Hardin said Salisbury’s crime statistics can easily be manipulated. He cited a number of community organizations that he works with and said being in the community would make the most significant difference.

He said Salisbury City Council members need to talk to people affected by crime and stop “throwing things at the wall.”

He said Salisbury can’t arrest its way to progress. Instead, the city needs to create things for young people to do, such as a Boys and Girls Club or technical training at local community centers.

He followed up the “arrest our way to progress” statement with a similar one about funding city government. Hardin said the city can’t cut its way to progress.

Salisbury needs to look at areas where financial mismanagement may be occurring, he said. Hardin said he was specifically interested in examining Fibrant’s finances.

Hardin said it’s important for Salisbury to grow, but the city also needs to maintain its character. It’s nice to randomly bump into familiar people in Salisbury, he said.

Kersey called crime the most pressing issue — both statistical and anecdotal — facing Salisbury. As a solution, Kersey said the city should use all resources available to consult with cities who have had success combating crime.

He proposed bringing in law enforcement professionals from outside of the city to consult with the Salisbury Police Department.

Until Salisbury can deal with crime, Kersey said the educational attainment won’t improve.

He was among the candidates who said increasing taxes isn’t necessary to fund government. The city is in a good financial position, he said.

When asked about business growth, he repeatedly stressed that Salisbury is also part of Rowan County. Kersey stressed his experience on county boards and commissions as important.

He said Salisbury has to attract baby boomers and keep its millennials. Bike paths are something that’s needed to improve the quality of life in the 21st century, he said.

When discussing crime, Lewis cited statistics from the city that showed crime is on the decline. However, gun violence is still an issue, Lewis said. He called it a societal problem rather than associating it directly to Salisbury.

He said Salisbury won’t have to raise taxes. Lewis mentioned a retail complex on Julian Road and two new hotels as potential for additional tax revenue.

When talking about growth, Lewis briefly talked about the potential for Fibrant. It’s important for Salisbury to leverage the fiber optic network in a way that can boost development, he said.

Paris talked extensively about Fibrant during multiple questions. Paris alleged that Salisbury subsidizes Fibrant through other funding sources. As a result, the police department’s budget isn’t as large as it could be, he said.

He said Salisbury either needs to make Fibrant grow or “make it go.”

However, he did call Fibrant an advantage that other, nearby communities don’t have.

He criticized a statement by Blackwell about selling city property, jokingly asking whether anyone had tried to sell property in the city lately.

Despite his criticism of the Salisbury Police Department’s operations, Paris didn’t list it as one of his top funding priorities. Salisbury needs to ensure it can provide the most essential services, he said.

Paris didn’t say Salisbury should eliminate its police department, but said municipalities aren’t technically required to have one.

A theme of Russell’s statements was an ability to work with others. He stressed that one individual council member can’t change Salisbury. It takes a group effort, he said.

When asked about crime, Ruseell talked briefly about the police staffing levels of other cities and said Salisbury was below where it should be. It would be beneficial to add more police officers, he said.

He said community policing would help, and the city does need additional police officers. Community trust is important, he said.

When asked about economic development, Russell said the community needs to come together to find a solution.

Like other candidates, Sheffield said community policing would be an important part of reducing crime rates. She said it’s important for Salisbury police officers to get out of their cars and experience the community.

Another solution she mentioned was job training programs. “Throwing money” at crime isn’t the solution, she said.

Sheffield said Salisbury needs to develop a profit-loss statement for Fibrant and review the city’s budget. After getting a handle of expenses and revenues, Sheffield said she would be able to definitively determine the best places to spend money.

She said Salisbury doesn’t need to become “just another suburb of Charlotte.” Sheffield said she is proud to tell people she lives in Salisbury, instead of “just north of Charlotte.”

Many candidates included education in the answer to multiple questions.

The first question directly asked about a correlation between Salisbury’s economy and the quality of education. Other questions included: crime near Salisbury High School, neighborhood organizations, Fibrant and attracting business to the city.

Though the city council doesn’t have direct authority over the school system, Alexander said the current crop of city council members support the system in a number of ways, including an additional pay stipend to principals.

Alexander mentioned a Rowan Hotspot program as being important for underprivileged children.

She mentioned supporting the school system again as the answer to a question about attracting and retaining business.

She said it’s important for a city council to work together.

When asked about Fibrant, Bentley said it had issues early on. It’s improved since the start, he said. However, Bentley said Fibrant could be more competitively priced.

Fibrant doesn’t have large installation costs for the city of Salisbury, he said.

Bentley said he “has very little interest in being Charlotte’s bedroom.”

Streamlining approval processes for developments could help attract more people to the region, he said.

When asked about the Rowan-Salisbury School System, Johnson said she would help create committees and work with the schools. It’s important to create more parent groups and sports clubs, she said.

Maddox said Salisbury has to become as business-friendly as possible. However, that can’t happen without good schools.

When talking about crime, Maddox said police are reactive and Salisbury needs to become proactive. Improving education is an example of being proactive, Maddox said.

As a result, Maddox said Salisbury shouldn’t give away Internet access without thinking about it heavily first.

Maddox, who served previously as a councilman, said he felt like he worked well with other city council members during his time as an elected official.

Many candidates talked about education. However, Miller said Salisbury couldn’t and shouldn’t take the city school system back. Instead, Miller said the city council could support the school system financially and advocate for better achievement levels.

He said a better educational system would result in a “gravitational pull” that attracts new businesses. The city has a lot of challenges, he said. He listed crime and poverty as examples, but mentioned education as a starting point.

When talking about Fibrant, Miller said he hopes to see the municipal fiber-optic network become the “darling” of all city-owned utilities. He said Fibrant would easily be successful if Salisbury residents — he called them the owners — would support the utility.

Post said schools are the most significant economic driver in Salisbury. Even housing prices are tied to education, he said.

People often move to cities and communities specifically because of schools, Post said.

Post said many Food Lion employees at the company’s headquarters don’t even live in Rowan County. As a result, their paychecks are often spent in other communities and other counties.

Post talked extensively about the importance of Fibrant. He listed the potential for Fibrant access to literally transform a community. Post used east Kansas City as an example.

One of his many ideas is to give free basic Fibrant to businesses and residents downtown.

He also described a number of his other ideas, including hiring a full-time grant manager for the city of Salisbury and help make West End Plaza a go-to destination

Short quips from Watkins elicited the most significant number of laughs from the audience. He kept his answers short and to the point.

Watkins said he was simply a concerned citizen.

When asked about community watch organizations, Watkins said it’s important for people to be nosy neighbors and be concerned about their surroundings.

Watkins said he is a satisfied Fibrant customer. If he has a problem, it’s often fixed in a shorter amount of time than it would take a private company.

When city officials are selling Salisbury to outsiders, they should also promote Fibrant, Watkins said. Fibrant should be in every new home, he said.

He said Salisbury doesn’t have to grow to be exactly like Charlotte, but can use its current resources to grow in a unique way.

Watkins mentioned a Cheerwine museum as one unique item.