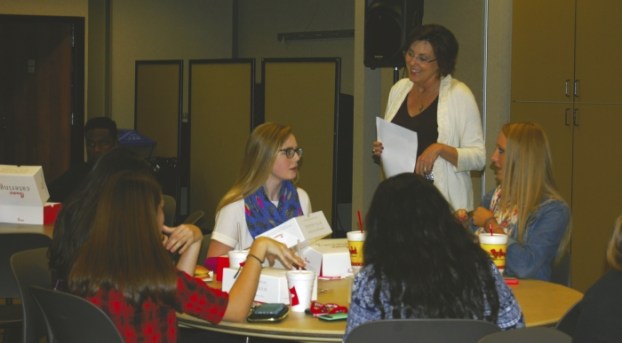 Superintendent Dr. Lynn Moody talks to the students of the Student Leadership Team about the district's strategic plan last Wednesday. Moody said she wants students to have a say in how they learn in their schools. Amanda Raymond/Salisbury Post

When junior student Leigh Ann Brooks got an application for the Student Leadership Team, she thought it was going to stay within the administration at her school, West Rowan High School. So she had a little fun with it.

“I drew a bunch of pictures on it and drew a smiley face and all sorts of jokes and stuff,” Brooks said.

Little did Brooks know that the applications went to the district for a special group of students the superintendent was putting together.

Brooks and other students from high schools across Rowan County gathered last Wednesday at the Catawba College Center for the Environment to brainstorm ideas on how to implement Superintendent Dr. Lynn Moody’s strategic plan in their classrooms.

A focus area for the plan is to increase student engagement and classroom rigor. Teachers are encouraged to use CCRP — connected learning, collaboration, relevancy and personalization — in their teaching and classroom environment.

The 47-member team plans to meet once a month to discuss how to advance the strategic plan. There were about six or seven students from every high school, according to Moody.

Moody said that as she works with principals and teachers on their leadership skills, she also wants to empower students.

“I felt like the most important job that I have as a superintendent is to build capacity in other people,” Moody said.

Students had to fill out an application and commit to setting aside a few hours to meet every month and complete outside projects.

“We did not ask for ‘A’ students,” Moody said. “We asked for students who liked to talk and liked to share and wanted to participate in the process.”

Moody started off the event with an activity to allow the students to learn a little bit about each other. Moody then discussed CCRP and encouraged the students to come up with their own explanations of each concept.

“What we want to think about is how do we create schools that are the kinds of schools that you want to participate in and you want to learn in,” Moody said to the students, “not just because it’s fun or cool, but because you can do a better job academically if you have those environments.”

The students were split up into groups to brainstorm ideas of how to incorporate the CCRP ideals into their classrooms.

Bailey Hurndon, a junior at West Rowan High School, said being part of the leadership team is a good way for students to share ideas.

“I can take ideas from students at our school and bring them here and we can try to incorporate them and make it an overall better school system,” Hurndon said.

Fallon Ritchie, a senior at Carson High School, said she hopes the ideas the leadership team comes up with will actually be accomplished.

“I hope that they will hear us and hear our opinions and put them into action instead of just waiting and waiting,” Ritchie said.

Cox said it is important to have students give their input on how they are educated.

“It’s important to ask for students to share how they learn best and their vision of school,” she said.

Moody agreed, saying that it is important to consider the students’ perspectives.

“I think that they will come up with ideas and suggestions for school improvement that will be things that we never considered,” she said.

Although Brooks said she joined the team because she likes to talk and meet new people, she said she hopes she and her fellow students will be heard.

“Hopefully it will help people above us hear what we have to say,” Brooks said.