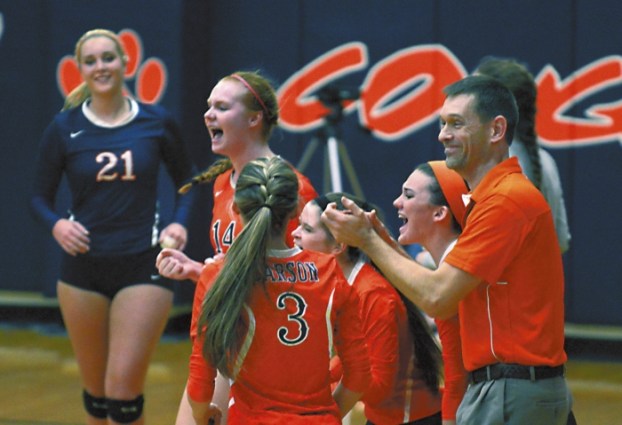 CHINA GROVE — Morgan Hester made the set, Lindsay Elmore hammered the kill, and Carson players — and students — rushed the net after Thursday’s monumental volleyball win against Cox Mill.
“I didn’t have time to think, I just kind of did it,” said a smiling Elmore, a 6-foot-1 sophomore middle hitter. “Cox Mill is a great team, great at blocking. But we found a way around some blocks.”
Carson avenged its only loss by sweeping previously unbeaten Cox Mill, 25-18, 25-17 and 25-23. Cox Mill had lost only three sets all season, but it dropped three in a row on Thursday.
“Just a total team effort,” Carson coach Kelan Rogers said. “Everyone played about as well as they can play.”
Carson and Cox Mill tied for first in the 3A South Piedmont Conference. Carson (21-1, 17-1) won the coin toss that followed the match and will host the semifinals and championship game in next week’s SPC tournament. A third Carson meeting with Cox Mill (23-1, 17-1) could occur in Wednesday’s title game and would settle the SPC’s No. 1 seed for the 3A state playoffs.
“It’s two really good teams, and that was some good volleyball played today,” Rogers said. “Winning this one just evens up the series for us. There were no losers on that court. Cox Mill is good enough to beat anyone in 3A.”
So, apparently, is Carson. State runner-up to Cardinal Gibbons in 2012 and 2013, the Cougars “slumped” to 17-10 in 2014, but they’ve gotten healthier and older and they’ve added new faces.
One of the veterans, 5-10 Elena Turnbull, turned in a phenomenal all-round performance Thursday to lead the way. She did it all — serving, digging and hitting (13 kills) like her hair was on fire.
“It was Senior Night, I’ve played with these girls a long time, and I wanted to win for them,” Turnbull said. “We got on a roll in that first set, we got our adrenaline going, and we never stopped. We kept up the energy and the momentum all night.”
Cox Mill has several good players, but the most special is Taylor Rowland, a 6-2 sophomore committed to Auburn. Rowland pounded 17 kills in the match, but Carson dug several balls early that looked like certain Rowland kills and confidence grew.
Carson trailed, 6-2, but after a timeout, the Cougars charged. They caught up at 9-all.
Hester and Turnbull teamed up for an emphatic block on the right side that was the signature play of the first set, and Carson finished strong.
“No. 12 (Rowland) is a big hitter and the last time we played them we worried about her so much that we forgot to do the things we needed to do as a team,” Carson senior setter Morgan Hester said. “But tonight, everybody played out of their minds.”
Carson started so furiously in the second set that Cox Mill was knocked back. It was 4-1, then it was 8-2. After a fantastic spree by Turnbull, it was 19-9.
Cox Mill tried to rally late. The Chargers picked up its blocking and its intensity, and sliced a 23-12 deficit to 24-17. But Turnbull finished off the set, soaring, hanging, and then dinking over the outstretched arms of two leaping blockers.
Cox Mill got down, 6-1, in the third set, but from there it was a desperate struggle. The Chargers, who have lost only two of their 51 matches the last two seasons, played like champions, and Carson had to fight for every point.
“We focused in and we brought it all out,” said Carson freshman outside hitter Mallory Weast, who contributed 12 kills. “Everyone played so well. The kills I got were because of (senior libero) Jordan Osborne. She was talking to me, telling me where to go, letting me know where the block was.”
It was 21-all in the third set when Osborne stepped to the service line.
“It seems like I’m always serving late in the set,” Osborne said. “We practice that situation, so we’re always prepared and confident.”
Osborne’s fortunate ace — the ball trickled off the top of the net — put Carson back ahead.
It was 22-all when a powerful Rowland spike was ruled long by an inch, and Carson inched ahead 23-22.
Turnbull smashed an ace for 24-22. It was 24-23 when Elmore’s clutch kill started a celebration.
“I feel content and complete inside,” Osborne said. “We played with the most heart we’ve ever played with.”
•••
NOTES: First-round tournament games will be played on Monday at both Carson and Cox Mill. Carson will take on No. 8 seed Northwest Cabarrus at 4:30, with the 4 vs. 5 matchup (Robinson vs. East Rowan) following at Carson. At Cox Mill, the Chargers will take on No. 7 West Rowan, and No. 3 Hickory Ridge will battle No. 6 South Rowan.
The four survivors will convene at Carson on Tuesday. If Carson beats Northwest, it will play in the 4:30 p.m. game on Tuesday vs. the Robinson-East Rowan winner.