Prep Football Notebook for Week 8: Falcons on a roll 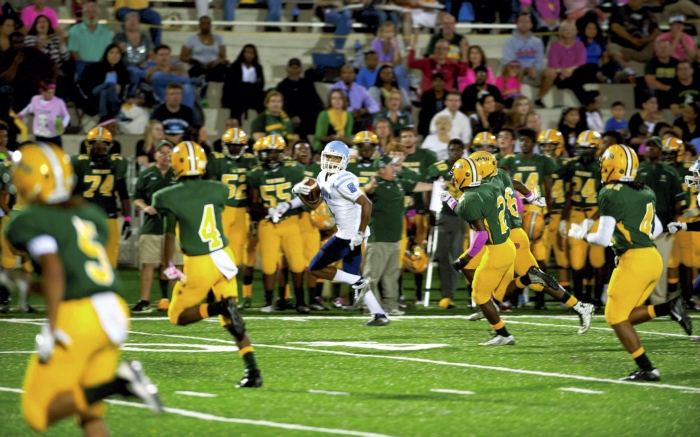 JON C. LAKEY / SALISBURY POST West Rowan’s Kortez Weeks (5) runs the ball up the sideline for a gain after a pass reception in last week’s game at Central Cabarrus. The Falcons won, 21-14, their sixth straight victory. West plays at East Rowan tonight in a televised game at 7:30.

Prep football notebook …
WEST ROWAN
West Rowan pulled out a 21-14 victory at Central Cabarrus on Friday to stay unbeaten in the league.
The Falcons (6-1, 5-0 SPC) have won six straight since a 28-26 setback against 4A Mooresville opening night.
This is the longest winning streak for the Falcons since they took 11 in a row in 2011 between a setback to South Pointe, S.C., and a 3A state-title game loss to Havelock.
•••
West has scored 29 touchdowns, with four provided by defensive players Theo Fisher, L.J. Robinson, Jai Hogue and Malcolm Ingram and two more scored on kickoff returns by receiver Kortez Weeks and DB J.T. Sanders.
•••
Sanders moved into a tie for the county lead in interceptions when he got his third one against Central Cabarrus.
•••
West plays at East Rowan tonight at 7:30 p.m. in a game that will be televised live on Time Warner Cable 323. The pre-game show is set for 7 p.m.
•••
The Mustangs crushed West 59-14 in Mount Ulla last season in a stunning result, and the Mustangs also ended West’s 44-game, 11-season winning streak against Rowan opponents in Granite Quarry in 2012.
In the all-time series, West holds a narrow 25-23-1 lead. The series dates back to 1959, the year both schools opened.

EAST ROWAN
East Rowan (2-5, 1-4 SPC) won 36-13 against Northwest Cabarrus on Friday, but it could’ve been even more lopsided.
The Mustangs were on the wrong end of two inadvertent whistles. Both cost the Mustangs touchdowns.
One wiped out what would’ve been a long touchdown run for Keith Tillman. The other erased what would’ve been an East defensive touchdown on a fumble recovery in the Northwest end zone.
“Two inadvertent whistles in one night is pretty crazy,” East coach Kenneth McClamrock said.
•••
McClamrock’s impression of West Rowan is the same impression everyone has when they see the Falcons get off the bus.
“Whatever they’re feeding their guys is different than what we’re feeding ours,” McClamrock said with a laugh. “Those are some huge guys.”
•••
While it’s been a down season for East, the Mustangs feel they did a lot to beat themselves against Carson, North Rowan and Cox Mill.
Another upset of West would change everything.

NORTH ROWAN
Ball security drills were the focus for the Cavaliers at this week’s practices, and with good reason.
North (2-5, 1-0 CCC) has put the ball on the ground 17 times and has lost 15 of those 117.
It’s been a team effort. Eight different Cavaliers have fumbled.
•••
The most bizarre fumble of the season occurred in Thursday’s 18-13 win against Lexington.
Lexington’s Daniel-Reid Bennett took the ball right off the shoulder of North running back Xavier Haley and set sail on a touchdown romp.
•••
While he only has one sack this season, defensive end Zion DeBose has been credited with 20 tackles for loss and 22 quarterback hurries.
End Jake Pritchard and nose guard Steven Thurston have accounted for 14 tackles for loss apiece.
•••
North DB Jaylen Brown had several big hits against Lexington and was credited with eight tackles.
Eric Gibson, Matthew Hoosier and Javin Goodine forced fumbles against the Yellow Jackets.
North is physical and has created even more fumbles than it’s coughed up. Ten different Cavaliers have caused a fumble, and the team has knocked the ball loose 21 times.
•••
Hampton said the Cavaliers’ offense still has a long way to go, but North’s special teams are progressing and had their best game against Lexington.
Jacob Young kicked two field goals, Jaleel Webster was good on punt returns, and the Cavaliers produced a game-changing blocked punt.

SALISBURY
The senior running-back tandem of Willie Clark and Antwond Glenn surpassed 3,000 career rushing yards in Friday’s 14-7 loss to East Davidson.
Clark had 63 yards, while Glenn had 53 against the Golden Eagles.
Clark has 1,684 yards for his career. Glenn has 1,390.
•••
Salisbury’s defense played well again. Coach Ryan Crowder praised the play of linebacker Marquies Gaither and safety Darius Jackson.
Jackson was named Homecoming King at halftime, while volleyball standout Lora Withers was named queen.
•••
Salisbury (2-5, 0-1 CCC) also dropped its CCC opener at home to East Davidson in 2013 but bounced back to beat Lexington on the road the following week.
The Hornets will try for a repeat of that on Friday.

CARSON
Carson kicker/punter Cole Howard had quite a game in Friday’s 51-10 win against South Rowan.
Besides staying busy on PATs, his only punt traveled 46 yards and he kept South’s offense in bad field position with touchbacks following touchdowns.
“South Rowan has two great kickers (placekicker Brennan Lambert and punter Marshall Long), but Cole was competing with both of them and he was so good that we didn’t lose the kicking game,” Carson coach Joe Pinyan said.
•••
Quarterback Owen White, linebacker/defensive end Blake Daniels and free safety Andy Jerman all returned from injuries for the South Rowan game, and that’s one reason why the Cougars battered the Raiders.
•••
Carson’s 424 rushing yards against South were the second most in a game in school history. Only Carson’s 460 rushing yards against South in 2010 topped it.
Carson (5-3, 2-3 SPC) blocked well on traps, and fullback Dylan Livengood scooted for a career-best 152 yards. Halfback Andy Lear had his first 100-yard rushing game since he rolled for 121 yards as Carson’s QB in the 2014 opener against Salisbury.
Carson’s rushing numbers piled up late in the game with reserves and jayvees carrying the ball.
Sophomore Jay Wilkerson scored his first varsity TD, and backup fullback Rhine Barnette had several strong runs.
•••
Friday’s victory was the 116th for Pinyan. He moved past Roger Secreast into fifth place for football-coaching wins at Rowan schools. Larry Thomason (North Rowan) is fourth with 125.
Pinyan coached 100 wins at Salisbury.
•••
Carson’s defense came up with three turnovers against South, with Matt Beaver falling on a fumble and Luis Cipres and D.J. Fulcher making interceptions.
•••
Carson had 17 first downs in the first half against South and had 248 rushing yards before halftime.
•••
Carson’s 51 points marked the first time the Cougars had topped 50 in a game since 2010. Carson’s record for most points in a game remains a 56-14 romp against North Iredell in 2010.

South Rowan
Long averaged nearly 48 yards on his five official punts against Carson and may break the county record for punting average this season.
He also had a 42-yarder erased by a penalty when Cougars ran into him trying to block a punt.
The modern county record recognized by the Post for season punting average is Kim Arey’s 42.4 yards per punt for East Rowan in 1978.
Boyden’s Bill Leonard, who passed away recently, averaged 43.0 yards on punts in 1967.
Lambert, the other half of South’s powerful kicking combination, booted a routine (for him) 45-yard field goal against Carson. He also was wide left from 50 yards.
Lambert has eight field goals this season. Robby Basinger kicked 10 in 2000 for a school record.
Lambert has kicked field goals of 50 and 51 yards this season.
North’s Tracy Maynor made a 53-yarder in 1988 for a long-standing county record.
•••
South (0-7, 0-5 SPC) has scored 80 points all season and hasn’t topped 10 points since losing 35-34 to Northwest Cabarrus on Sept. 11.
•••
South got quarterback Heath Barringer back from a concussion on Friday, and he threw for a season-high 168 yards against Carson. He got 87 of those yards on South’s successful hook-and-ladder play on its first snap.
•••
South takes on Central Cabarrus at home on Friday. Daniel Crosby, once a standout linebacker for the Raiders, is in his fourth year as Central’s defensive coordinator.

Davie
Davie (3-5, 1-2 CPC) probably played its best game of the season in Friday’s 36-22 loss to West Forsyth.
Davie led 15-7 at halftime, and it was 22-all after three quarters.
Davie won the final stat sheet, but lost on the scoreboard. Still, the game should be a confidence-builder for the War Eagles moving forward.
•••
Davie will have to try to upset North Davidson on the road on Friday without Brian Pitts in the press box.
Pitts has covered 251 consecutive Davie football games since 1996, but he’ll miss Friday’s game due to a mandatory, three-day umpiring clinic he’s attending.
Pitts umpires quite a few American Legion games and hopes to move into the SAC ranks next season.
•••
Junior QB Chris Reynolds threw his 18th TD pass of the season against West Forsyth. Either Ben Ellis (13) or Cooper Wall (5) has been on the receiving end for all of them.

A.L. Brown
The Wonders have left last season’s 6-6 record in the dust with a 7-0 start that has propelled them to a No. 6 ranking in the AP’s 4A state poll.
The Wonders are rated one slot above Mallard Creek, which has two losses. Who would have believed that possible when this season began?
Still, coach Mike Newsome frequently reminds everyone that you’re only as good as your last game, and the Wonders face the other MECKA squad with an unblemished conference record on Friday. The Wonders host 10th-ranked Hough, the team that knocked off Mallard Creek in overtime last week and a program that’s beaten A.L. Brown the last two seasons.
Hough’s defense shut out the Wonders in 2013. Hough’s offense buried the Wonders in 2014.
•••
The Wonders own their first seven-game winning streak since the 2011 season. They have opened a season 7-0 for the first time since 1999.
•••
The Wonders had to deal with a short turnaround from Monday’s battle against Vance but managed to beat Robinson 28-21 last Friday in their homecoming game.
The Wonders won with a number of players sidelined, including the guys who man the left side of the offensive line — Juan Morgan and Cameron Peters.
•••
One of the most improved facets for the Wonders this season has been kickoffs and kickoff coverage.
Nate Williams (four field goals, 35 PATs) has helped the Wonders win the kicking game most weeks.
•••
In terms of statewide respect, the Wonders 31-14 win over Vance probably was the biggest for the program since a 28-27 victory against Charlotte Catholic in the 2008 state playoffs.