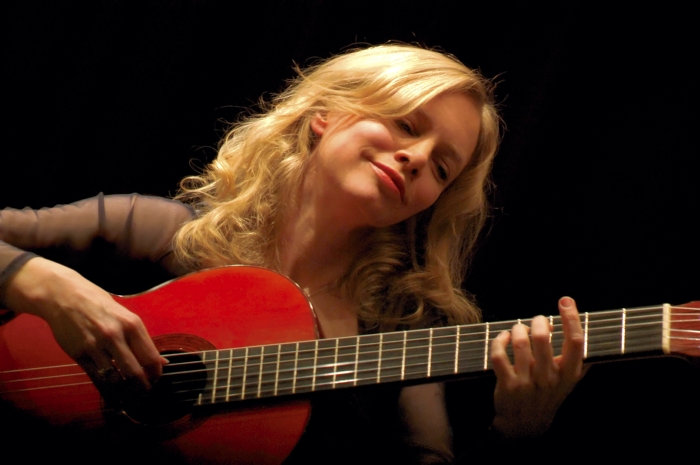 Muriel Anderson is one of the foremost fingerstyle guitarists, recently being named by Guitar World as one of the eight top female players in the world. Muriel has played with such legendary greats as Chet Atkins, Les Paul, and Tommy Emmanuel. Her music has been featured in a Woody Allen film, and has also accompanied our astronauts on the Discovery Space Shuttle.

She has traveled on concert tours both nationally and internationally, having taken her show on the road to Australia, Japan, France, Germany, Italy, Holland, Switzerland, and the U.K. Her new CD “Nightlight Daylight” has won eleven national awards, including the IAMA 2015 Instrumental Song of the Year award.

Muriel is known as the host of the “All Star Guitar Night” and founder of the “Music for Life Alliance” charity, which supports music education for young people. She has released over a dozen instrumental CDs, seven instructional DVDs and books, and written numerous articles in many guitar magazines. She has also been a supporter and pioneer of the unique Harp Guitar.

Muriel’s engaging personality, humor, and joy of music translate to her audiences, and her ability to easily cross the boundaries of folk, classical, jazz, bluegrass and international music have revered her to both fans and fellow guitarists. Muriel’s unique approach to the instrument virtually transforms the guitar into a lyrical choir, then a marching band, then a Japanese koto, then a Bluegrass band, one minute launching into a Beatles tune and the next, a classical concerto.

Rufty-Holmes Senior Center of Salisbury will host this free concert with Muriel Anderson on Friday, Oct. 23 at 2 p.m. The show is being sponsored by The Laurels of Salisbury, and will be hosted by the Rufty-Holmes Guitar Class. Call or come by Rufty-Holmes to pick up an RSVP ticket. You may call the center at 704-216-7714 or guitar class instructor Bob at 704-640-0279 for more information.

Anderson will also perform on Thursday, Oct. 22 at 8 p.m. along  with Alex deGrassi at The Evening Muse, 3227 N. Davidson St., Charlotte. Tickets are $20 at the door. www.eveningmuse.com