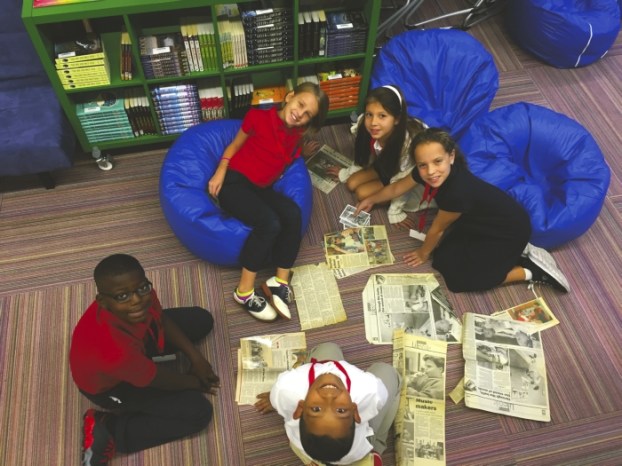 As Overton Elementary eases into its 50th school year, celebrations are in the works. The next “10 Things” about Overton are focused around school celebrations big and little, past and present. Join the fun!

#39 — For Overton’s 26th anniversary in 1991, students and staff celebrated “Sixties Dress Day” where everyone dressed in 1960s era clothing and accessories to commemorate the decade of Overton’s founding. Flower headbands and bell bottoms once again ruled the halls.

#38 — Our principal, Mrs. GeRita Walden, just celebrated her one year anniversary at Overton Elementary. Mrs. Walden joined the school originally as assistant principal on Sept. 15, 2014, and took over the reins as “proud principal” on March 2, 2015.

#36 — Overton’s Student Council has placed as a top finisher for the Rowan Rotary “Service Above Self” awards for 12 out of the last 13 years! Ten of those years, including last year, were first place!

#35 — Overton is certainly not as old as Hogwarts, but students in Mrs. Dinah Carpenter’s fourth grade classes were treated to a Sorting Hat celebration at the beginning of the year where they were “sorted” Harry Potter-style and selected to be in their class. Mrs. Carpenter retired in 2011 from Overton celebrating 24 years of teaching.

#34 — In 1995, Overton celebrated its 30th Birthday and threw a full-fledged party. The “Sixties” theme was alive and well, but this day’s celebration also included honoring former school board chairman Carroll T. Overton. Following Mr. Overton’s speech, the entire school shared a grand sized birthday cake to top off the day.

#33 — Each Spring Overton celebrates its eldest class with a special fifth grade awards assembly to mark the end of the elementary years and the upcoming transition to middle school. This year’s ceremony is planned for the school’s front lawn.

#32 — Years ago an “Overton Pride” poem was written by then teacher assistant Pat Boger and shared at a school assembly celebrating Overton’s school spirit and commitment to education. The acronym C.T. Overton was spelled out by the first letter of each line. The final line representing the “N” reads, “Nudging each child to reach for success, to all our children, we give our best.”

#31 — Overton’s newest celebration will be on Friday, Nov. 6 when the school hosts an Alumni Breakfast.

Do you remember any of the celebrations above? Email ptaoverton@gmail.com to find out more about the Overton Alumni Breakfast. This occasion will allow alumni to meet our new principal, visit our renovated facilities and take a trip down memory lane to their own childhood days. No bell bottoms required.

SALISBURY – People who book lodging for this year’s Commemorative Classic on Nov. 7 will be eligible to receive a... read more