Blue Bears getting steady work from their DB twins 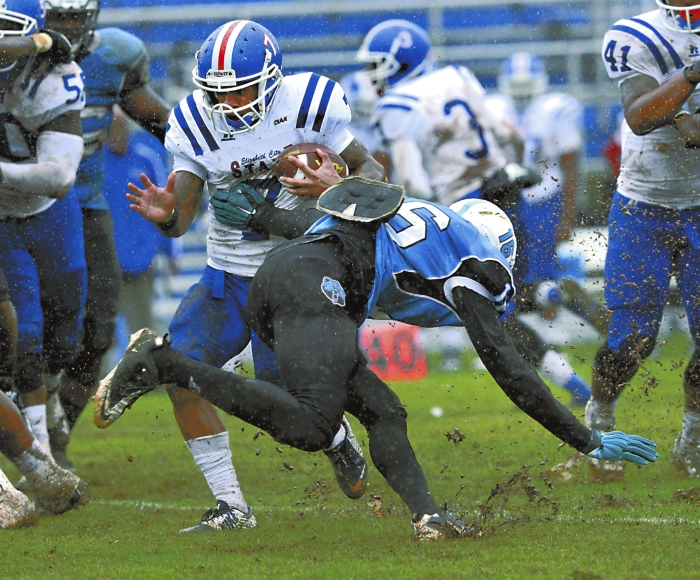 Yes, there are three different sets of twins on the Blue Bears’ roster, including starting cornerbacks Kevin and Kovarius Williams.

The Williams brothers, juniors from Jacksonville, Fla., are in their third year at Livingstone and paid their dues for playing time. Kevin played a little at free safety as a freshman in 2013 while Kovarius saw action only on special teams.

As sophomores, the brothers’ playing increased somewhat, in the defensive secondary. In fact, Kevin had six solo tackles against Shaw, this week’s opponent, in 2014’s 21-20 victory at Alumni Memorial Stadium.

Livingstone is looking for its second straight win on Saturday, taking on Shaw at 1 p.m., at Durham County Stadium. Last week, the Blue Bears snapped a two-game losing streak with a convincing 31-7 victory over St. Augustine’s.

In the win over the Falcons, Kovari had four tackles and Kevin had a pass break-up as Livingstone coasted to victory.

“I’m loving how everything is going,” said Kevin. “The defense has good intensity and we have good focus. We all are trying to make plays and we have a goal to be one of the best defenses in the CIAA.”

Kovarius and Kevin both acknowledged that the goal took a hit when the unit yielded 45 points to Bowie State on Sept. 26 and 41 more to Elizabeth City State on Oct. 3. But the Blue Bears came together last week to nearly pitch a shutout against winless St. Augustine’s.

“The Bowie State quarterback (Matthew Goggan) was one of the best we’ve seen, other than going against Drew (Powell) in practice” said Kevin. “When we had that loss, we just decided that we were going to have to step it up and play harder. The next thing you know, we started ballin’ and the chemistry has sort of fallen into place.”

Kovarius echoed those sentiments. “At practice last week, we kept talking about communication, that it had to get better out there on the field,” he said. “We really worked on that last week and when we got into the game last Saturday, it made a difference in stopping the St. Augustine’s offense.”

Kevin and Kovarius believe that rule changes over the years have made their jobs as defensive backs more difficult.

“It’s hard sometimes to not get a pass interference penalty because now days, you can’t put your hands on a receiver after five yards from the line of scrimmage,” said Kevin “You have to rely on your technique and footwork. If you don’t have good footwork, you really can’t play the position at all.”

“You can’t play the game without your feet because if you get out of position, then you’re more likely to grab or hold a receiver,” added Kovarius.

The twins said that going against teammate Jalen Hendricks in practice prepares them well.

“We love going against Jalen in practice because we know we’ll not see many like him in the games,” said Kovarius. Hendricks was the Offensive Player of the Year in the CIAA last season and won conference Receiver of the Week honors for last Saturday’s 141-yard, three-touchdown performance.

The Williams brothers played together at Jean Ribault High School in Jacksonville, and the team was only 5-5 during their senior year. Florida Atlantic, a Division I school, showed early interest in the twins, but then a coaching change occurred. Livingstone was there to invite the brothers to campus and they liked what they saw in Salisbury.

The only drawback is the distance from Florida doesn’t allow their parents to be at every game. Kevin Williams Sr. and Wanda, do plan to make the six-hour drive for the last three games of the season, all home games, starting with the Oct. 24 tilt with Winston-Salem State.

As freshmen, the twins got to return to Jacksonville as Livingstone played Edward Waters College at Raines High School, just down the street from Ribault High. Livingstone won that game, 23-20, and Kevin had two tackles.

The twins have three sisters, two older (Jasmine and Ajuna) and one younger (Keriyae). The kids’ ages range between 26 and 21 years old.

The brothers, like a lot of twins, do things alike. Both are sports management majors with nearly 3.0 grade point averages, and both are on track to graduate in May 2017. After school, Kevin wants to be a personal trainer while Kovarius plans to go to nursing school.

Kovarius is looking at nursing in the sports medicine area, helping people rehab from injuries. “I know what it is like to tear an ACL in a knee,” said Kovarius. “I had that injury during my senior year in high school and played with it, not knowing what I had at first. I missed all but four games during my senior season.”

The sibling rivalry showed up when the two were talking about their favorite NFL teams.

Kovarius likes the hometown Jacksonville Jaguars, though Kevin questioned his brother’s true knowledge of the team’s history. Kevin’s team is the Seattle Seahawks and he insists he was a fan before the team’s two consecutive Super Bowl appearances.