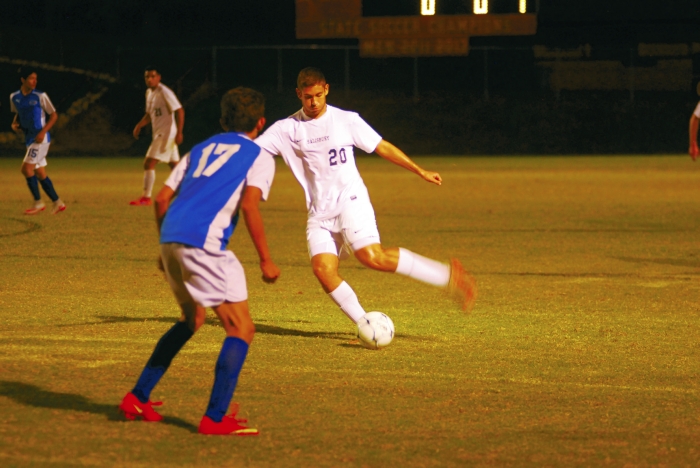 SALISBURY — Salisbury’s unbeaten boys soccer team continued swallowing its season one bite at a time Wednesday night — even if this one had a slightly different taste.

There was no cascade of offense for the  high-octane Hornets against Central Carolina Conference upstart Lexington, but they used a pair of second-half goals to win a 2-0 first-place showdown.

“All those 8-0 and 9-0 games contributed to the mentality we brought into this match,” coach Matt Parrish said after league-leading Salisbury (15-0-2, 5-0) completed the first half of its conference season. “I think maybe we thought a little too highly of ourselves. We sometimes feel like we can turn it on any time we want, and we should have been more prepared. Credit Lexington for that. They played with grit, determination and guts.”

SHS, meanwhile, played without three starters and lost two others — sophomore Melvin Bonilla and freshman Brandon Ibanez — to second-half injuries. “Still, they’re a very well-organized team,” Lexington coach Tim DeZego said after the Yellow Jackets (8-9-2, 4-1-1) were outshot 21-6. “We’re a good team and we gave them a heck of a game. We just didn’t attack enough to beat them.”

Salisbury’s attack was luke-warm at best in the first half. It managed five shots but it’s passing game was inconsistent and fatigue may have been a factor.

“They came out fast and were working the ball around very well,” said SHS midfielder Joshua Lynch. “Throughout the first half, we weren’t really connecting passes. There were a lot of blocks and stuffs. So we looked to pass over the top to get balls to our strikers, who were sitting on an island in the corners.”

The Hornets’ first true scoring chance came early in the second half, when goal-scoring machine Landon Goodman headed a ball over Lexington keeper Jonathan Ruiz, who had wandered high into the penalty area. The play was foiled when a defender retreated to the goal line and steered the ball away from danger.

“I had gotten a long ball from Christian (Uribe),” Goodman explained. “And the keeper came all the way out to me. I knew he was there. I just didn’t head it hard enough and that gave the defender time to get back there.”

Moments later Salisbury broke the scoreless tie on a bang-bang rebound conversion. Goodman initiated the play with a 30-yard free kick that Ruiz stopped, but Uribe — a senior back — charged the cage and buried the carom with 30:08 remaining.

“We starting playing with our hearts,” Uribe said after netting his fifth goal. “After that Lexington’s confidence went all the way down while ours boosted up.”

Midway through the second half Ruiz was replaced by sophomore Marc Anderson and the Hornets were quick to test him. They peppered 10 shots-at-goal in the final 20 minutes and connected on one — Goodman’s penalty kick with 8:30 remaining. Without giving away any secrets, Goodman provided some you-are-there insight into his 45th goal of the season and 10th this week.

“I did some things,” he said. “And I knew by the time I put the ball down which way I was going.”

“This had a little bit of a playoff feel to it,” he said. “That’s good for us. I think we were getting a little complacent, a little too cocky. I like confidence but I do not like cockiness. So yeah, we had to fight for one tonight. We’ll gain a lot from this.”