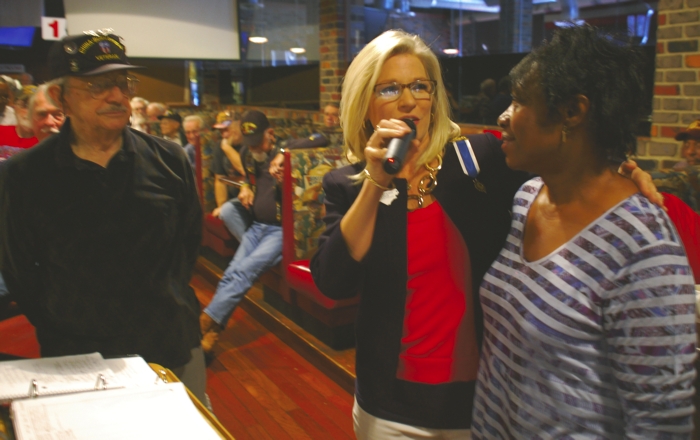 Kim Edds, center, president of the Elizabeth Maxwell Steele Chapter of the Daughters of the American Revolution, recognizes Desert Storm veteran Thelma Luckey, who opens her Salisbury restaurant to veterans for coffee and doughnuts every Tuesday morning. Tom Harrell is at left. The DAR honored Vietnam veterans Tuesday at the restaurant. Mark Wineka/Salisbury Post

SALISBURY — Greg Edds, chairman of the Rowan County Board of Commissioners, told military veterans Tuesday morning events in the country and world keep unfolding “that bother all of us.”

But his own frustrations dissipate when he’s in a roomful of veterans, Edds said.

“Every time I come into a group of guys like you, I’m proud of you,” Edds said. “… I look at you, and I know you’re not the problem. You’re the guys I want my son to be around and emulate.”

Edds told the men, who were enjoying their regular Tuesday morning coffee and doughnuts at Thelma’s Down Home Cooking, he was always honored to be in their presence. Then he turned the rest of the morning program over to his wife, Kim, president of the Elizabeth Maxwell Steele Chapter of the Daughters of the American Revolution.

The local DAR members waited on tables Tuesday. But beyond that, the local chapter paid tribute to some 60 Vietnam veterans in the room and gave special recognition to people who had the vision for the Tuesday morning coffee shop and those who keep it going, including restaurant owner Thelma Luckey, a veteran herself.

On their way out Tuesday, the Vietnam veterans received a certificate of appreciation, a lapel pin and bumper sticker that said, “Vietnam War I Served,” something you’ll probably be seeing on many vehicles in town.

“So many of them have never been thanked,” Kim Edds said of the men and women who served during the Vietnam War.

The DAR is partnering with the national commemorative effort recognizing the 50th anniversary of America’s full-scale involvement in Vietnam. The DAR chapter has been participating in several events honoring Vietnam veterans, including a luncheon at Rufty-Holmes Senior Center and the “Tour of Duty” exhibit opening at Rowan Museum.

Kim Edds also recognized Rick Johnson for all he does on behalf of veterans.

Edds praised Luckey’s servanthood and passion, making her place of business available to the veterans.

“Words just aren’t enough to thank you for what you’ve done,” Edds told her.

DAR member Diane Hall gave Luckey an amethyst with an eagle on the back made for Hall more than 10 years ago in recognition of her father’s service in Korea and her husband’s service in Vietnam.

The gift proved emotional for Luckey.

“You made me cry,” she said. “I don’t have words to express my feelings.”

Timmons reported the area he serves now has seven of these kinds of coffee shops for veterans, and in November, a new one will be opening up in Charlotte at Dave & Buster’s of Concord Mills.

The sport of NASCAR also is becoming involved, Timmons said. On Nov. 4, Richard Childress Racing in Welcome is offering veterans a tour of its race shop.

Timmons noted about 100 veterans were at Thelma’s Tuesday, and the reason why, he said, was more than the coffee and doughnuts. It was more about their common bond and having a place to talk about the oath they took for their country and the shared experiences they had, Timmons said.

“It’s just something that makes the coffee shops works,” he added.

Rachelle Heidlebaugh, who works for Concerned Veterans for America, a nonprofit organization advocating for policies that preserve the freedom and prosperity veterans fought and sacrificed to defend, spoke of CVA’s efforts to help veterans dealing with war-related problems such as drugs and alcohol.

Harrell said he’s hoping this group of men can start meeting at Thelma’s on Monday nights. They have stories, he said, that “will peel the hair off your head.”

“She’s reaching an element of wars we forgot about, who have fallen off the radar for us,” Harrel said of Heidlebaugh’s efforts to reach out to some of these veterans who don’t necessarily show up for the coffee mornings.

Harrell said the coffee shop for him and others has been an adventure that never ends, just as the oath servicemen and women took for the country never expires until their deaths.

Away from the coffee shop program, Kim Edds said Tuesday the local DAR chapter plans to become heavily involved in a landscaping project at the State Veterans Rest Home, located on the campus of the Hefner VA Medical Center.

This past weekend, DAR members planted daffodils, spread mulch and cleaned up flower beds at the rest home, but that is just the beginning, Edds promised. The chapter is working on a major landscaping design plan for which the DAR will have to raise funds.

“The men out there are so excited,” she said. “It’s a special project that has come to our attention.”

For more information on how to help, contact Edds at kimedds5@gmail.com.