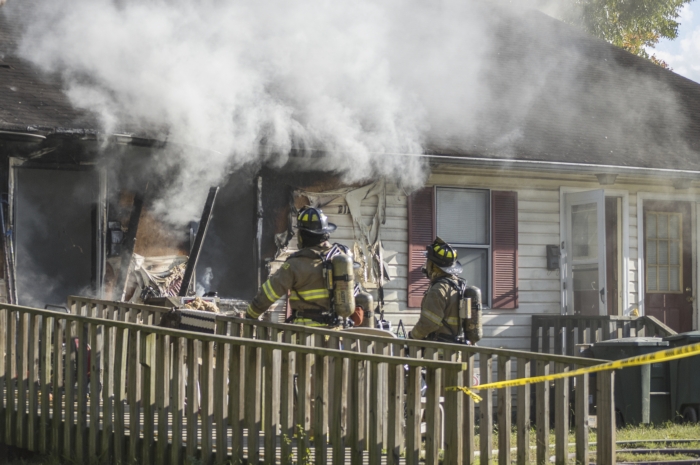 Josh Bergeron / Salisbury Post - Firefighters on Monday look at the charred remains of an apartment on South Long Street in Salisbury following a fire that displaced at least six people.

At least six people were displaced Monday when a fire gutted an apartment on Long Street in Salisbury.

The fire occurred just after 4 p.m. in a building on the 200 block of South Long Street — between East Bank and East Fisher streets. The building — split into four apartments — housed at least six people, according to Salisbury Fire Department Battalion Chief David Morris.

Morris said emergency personnel were unable to locate the residents of one apartment. Of the six building residents located, Morris said no one was injured. He said one dog was killed in the fire.

One of the displaced residents was Bridgett Poston, who had moved into the building with her fiancee in April. Poston, who is pregnant, said she and her fiancee David Stewart got engaged two months ago.

The apartment wasn’t a permanent home for the couple, Poston said, but that didn’t minimize the fire’s affect.

“We had literally just had a baby shower,” she said, struggling to hold back tears. “I don’t know if any of the stuff is OK.”

Locked in an embrace, Poston and Stewart watched as firefighters put out remnants of the fire. Poston said the she and Stewart were returning from a trip to the store when they spotted a plume of smoke and the crowd of emergency responders.

Morris said the building should be salvageable. The fire was contained to one of the four units, he said. The other three units received smoke damage, he said. None of the units are habitable following the fire, he said.

Morris said firefighters used a transitional attack — first attacking the blaze from the exterior — to combat the fire.

The cause of the fire was still under investigation immediately following the incident.