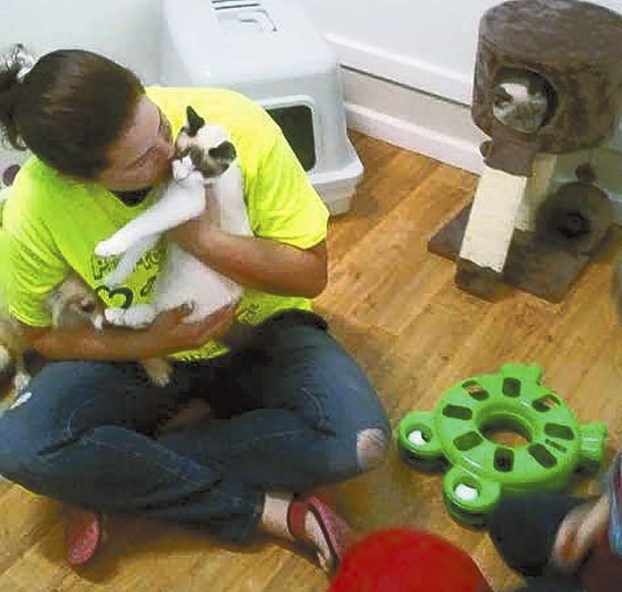 Frasier cuddles one of the many cats available for adoption at Purfect Purbabies. Rebecca Rider/Salisbury Post

Dogs may have a reputation as man’s best friend, but the ladies who run the Purfect Purbaby Rescue believe that cats deserve a chance, too.

Jan Frasier says she started Purfect Purbabies because Rowan County didn’t have a rescue specifically for cats. But there were seemingly an endless number of dog rescues.

“That’s the reason I was so determined to make it happen,” Frasier said.

At first, Frasier just operated a cat rescue out of her home. But soon she joined forces with Sarah Bruce and Wendy Burnette, and they started Purfect Purbabies.

The trio takes in ferals and strays, rescues cats from bad homes, and adopts last-day cats from local animal shelters. From there, they took them home, or placed them in foster houses. The cats are spayed or neutered, vetted, and then put up for adoption.

“It’s just something I’ve wanted to do ever since I was a kid,” Frasier said.

The rescue has been listed as a 501-C-3 for about a year now, Frasier says, but two weeks ago they finally got a building to use as an adoption center. Purfect Purbabies is now located at 901 S. Main St. in Salisbury. The storefront is open, and at any given moment a cat can be seen peering through the windows. Inside, kittens tumble across the floor.

The cats are given names and paired up with a kennel mate based on compatible personality. They’re all allowed time out on the floor, and they rotate for a few days in a free-range room in the back.

Bruce says they put a lot of work into spending time with the cats and making sure they’re comfortable with people and with each other. Most of the cats are sweet, she says, eager to play or to climb into a lap and purr.

Frasier brings her Pomeranian to the rescue so that the cats can get used to being around dogs. It serves an important purpose, Burnette explained. There’s no guarantee the cats will be the only pet in their new homes.

“We’d rather them not be scared,” Burnette said.

The ladies at Purfect Purbabies believe that no cat is unadoptable. It’s just a matter of finding the right fit. If a cat is considered too feral for a career as a lap cat, it is adopted out to a local farm to serve as a mouser.

“We always find a place for them,” Frasier said.

Currently, the rescue has 40 cats up for adoption.

They’ve had 15 cats adopted out since they opened the location on South Main, but they won’t let just anyone take their cats. People interested in adopting a cat from Purfect Purbabies have to provide vet and personal references before they’ll be considered.

And Frasier says they will never adopt a cat out to anyone who intends to declaw them. Some of their cats are inside-only, as well, and the rescue will take the pet back if they learn the new owner plans to put them outside.

But sometimes people adopt a cat only to learn they, or someone else in their house, is allergic. Purfect Purbabies will always take a cat back. It’s an awful feeling, Burnette says, to go into a shelter and see a cat they they’re adopted out a few weeks earlier. The ladies at Purfect Purbabies don’t want that to happen to any cat.

“We’ll always find a place for them to be safe,” Burnette said.

Since it is a nonprofit rescue, Purfect Purbabies is funded entirely by donation. They do a lot of fundraisers, Burnette says, and are always looking for food and litter donations. Frasier requests that all food donations be Purina Cat Chow, as changing brands frequently can cause stomach problems for cats.

If you’re interested in Purfect Purbabies, you can visit their Facebook page at www.facebook.com/PurfectPurbabyRescue. Monetary donations can be made through PayPal or by visiting the rescue’s South Main location.