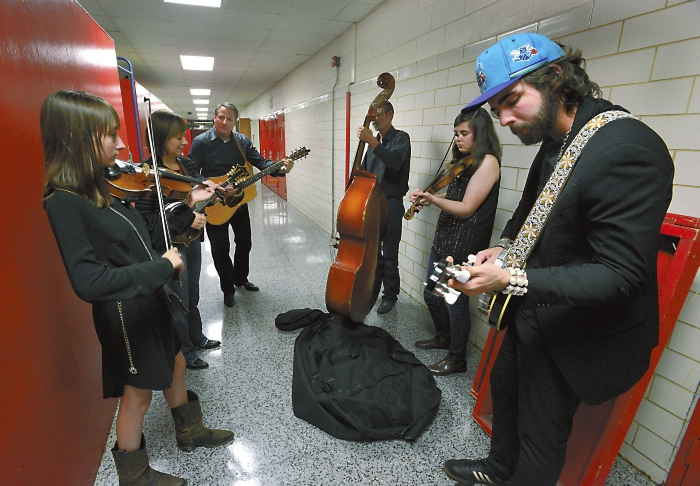 The Lemon Ridge Band practices in the hallway at the Granite Quarry Civitian Fiddler's Convention. Left to right. Ruth Shumway, Mary Shumway, Dave Shumway, Gerald Lemonds, Sarah Lemonds, and Clint Lemonds. Ruth Shumway won the championship in the Most Promising Talent 12-16 category and Sarah Lemonds was 1st runner up in the adults fiddle competition. photo by Wayne Hinshaw, for the Salisbury Post

The sounds of rhythmic guitars, banjos and fiddles filled the air in the East Rowan High auditorium on Saturday night as the 49th annual Granite Quarry Civitan Fiddlers Convention took to the stage.

The root of all American music is bluegrass music, tracing its origins to the Appalachian Mountains. The tunes and  songs coming from front porches of mountain cabins and echoing over the valleys and hills were reflected off the  walls of the auditorium. The sounds were all traditional and gospel bluegrass. The songs picturing  the struggles and pains of everyday life were plucked, fiddled and sung by bands and individuals  who play the music for their love of the sound and the tradition.

The “Movin’ On Bluegrass Band” from Concord is such a band. Rick Blackwelder plays bass. Charles Honeycutt is on the banjo. Jimmy Burris handles the mandolin and Howard Honeycutt the guitar.

Howard Honeycutt explained that they have been playing together “off and on for 40 years.” They started coming to this competition when it was held at the Granite Quarry Elementary School and Principal James Mathis was the director. The group has been successful through the years.  Last year they were judged the best band with the best bass player, the best banjo player, second runner-up on the guitar and mandolin.

This year they were the second runner-up band and Blackwelder was the  first runner-up on bass.

“If you play bluegrass for a living, you will go hungry,” Howard Honeycutt said. “This is our hobby. We all have regular jobs.”

Blackwelder, who had gall bladder surgery on Thursday, added, “ This bluegrass music has been used to hold families together when we come together and play.”  He remembered when the auditorium would be full of people coming to hear and be entertained. He suggested that today many might be too busy to come out for the show.

The Lemon Ridge Band was composed of family members from the Lemonds and Shumway families from Charlotte. Mary, Ruth and Dave Shumway were joined by Gerald, Sarah and Clint Lemonds.  The two families had not played together before Saturday so they made up the band name “Lemon Ridge” on the spot. They did well.  Sarah Lemonds was judged first runner-up on fiddle and 12-year-old Ruth Shumway was the winner in the “Most Promising Talent  ages 12-16” on her fiddle. Ruth completes in all the competitions that she can get to. “Sometimes I win and sometimes I don’t,” she said with a smile.

The local Edwards Family — Elizabeth, Shane, Mary Lynn, and Alex — played a set of pieces, including one written by their mother, Connie Edwards, who was honored for contributions to bluegrass music by the Civitan Club.

Ervin Hatley, 79, played the “Orange Blossom Special” on his fiddle with his family.  He is the father of all the well known and respected music teachers  carrying on the Hatley bluegrass family traditions. Hatley’s only comment after playing was a big smile and the words, “It went real good.”

The Most Promising Talent of children 11 and Under and the 12-16 age groups  exhibited a lot of talent for future shows. Gabe Webster fiddled “Praise the Lord, I Saw the Light.” Josie Correll, wearing green and brown cowboy boots, fiddled “Amazing Grace.”  Young Jacob Pierce, sporting bright orange shoe laces, plucked the banjo. Jonah Chaney, 9, from Albemarle, was the winner of the 11 and under group. He said it was a lot of fun for him.  Mason Gordon, who is 13,  played the fiddle, although he only started on the instrument three weeks ago.  He did pretty well.

The Guinn Sisters from Kannapolis — Elizabeth, 14, and Suzanna, 15 — were second runner-up in the 12-16 age group, but they certainly were the best dressed in their pretty mint green dresses.  Suzanna explained that it was the first time they had performed together, with Elizabeth on the fiddle and Suzanna doing vocal. They did a Patsy Cline song, “Faded Love,” so they had to dress like Patsy Cline.