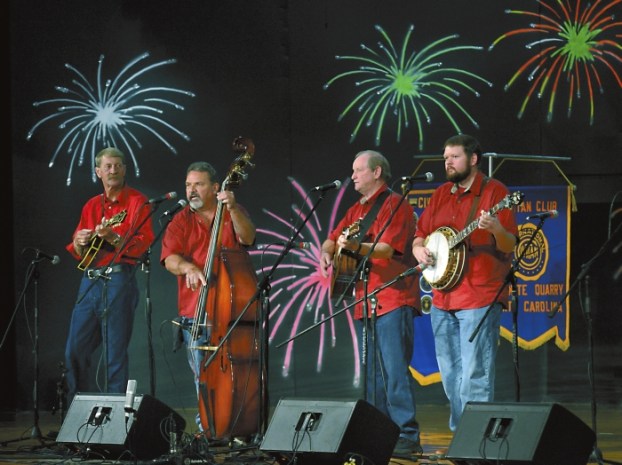 The "Movin' On Bluegrass Band" from Concord was been competing in the Granite Quarry Civitian Fiddler's Convention for 40 years. They were the 2nd runner up for best band this year. They are Jimmy Burris, Rick Blackwelder (who was 1st runner up playing the bass), Howard Honeycutt, and Charles Honeycutt. photo by Wayne Hinshaw, for the Salisbury Post

Saturday’s rainy weather failed to dampen the spirits of the fiddlers and other musicians who gathered at East Rowan High School to compete in the 49th annual Granite Quarry Civitan Fiddlers Convention. North Carolina Civitan West governor, Dr. Mark Beymer of Salisbury, greeted the audience and commented on the importance of traditional bluegrass music in North Carolina’s culture. He also commended the Granite Quarry Club for its role in promoting and preserving the music to be passed on to younger generations.

Fruits of that labor were evident Saturday evening, with as many youngsters as adults competing for $1,700 in cash prizes and rosettes. The youth competition in the most promising talent categories began at 6:30 p.m. and soon had the audience in the near-capacity auditorium cheering and clapping in amazement. Given the option to compete in the youth or adult categories, many of the talented youngsters were so proficient on their particular instruments that they gave the adult competitors a run for the money.

Each year the Civitan Club honors an individual who has been a large influence in the promotion of bluegrass music in the community and surrounding region. Connie Edwards was this year’s honoree. Edwards and her husband, Dale, live in Salisbury. She is a self-taught musician and singer/song-writer and the mother of four who perform as The Edwards Family. The presentation was made during a break in the competition, followed by a performance by The Edwards Family Band.

Don Livengood, who chairs the convention, stated, “Without the Fiddlers’ Convention and the food that the club sells at the music festival, we wouldn’t be able to support all the different projects we do.  We are extremely fortunate to be able to continue the rich tradition of bluegrass music. The Convention has evolved into a celebration, with many of these fine musicians retuning year after year.”

The club presented $1,700 in cash and rosettes to winners in 10 categories. Champion fiddler Rick Lowe was presented the John Ralph Pennington Memorial Award and miniature fiddle. Pennington spent his life playing and promoting bluegrass and traditional music and was a luthier of fine string instruments. The award was presented by Pennington’s daughter, Vivian Hopkins, who also works with the Civitan Club to coordinate the event.

Top bands and individual winners were:

By Wayne Hinshaw For the Salisbury Post The sounds of rhythmic guitars, banjos and fiddles filled the air in the... read more