Wayne Hinshaw: Only a few images are seen 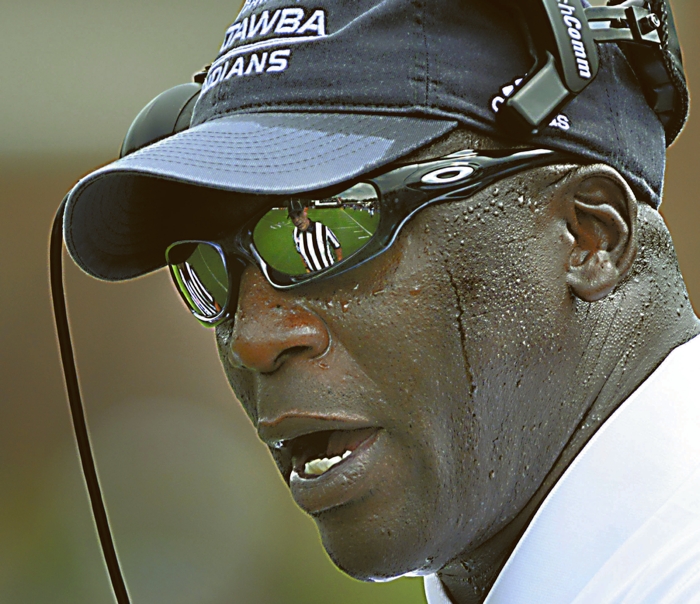 Catawba Head Coach Curtis Walker talks to a referee on the sideline with the referee's image reflecting in Walker's sunglasses. Wayne Hinshaw/For the Salisbury Post

Famous photographer Henri Cartier-Bresson is quoted saying, “Your first 10,000 photographs are your worst.”  I like to think that I have cleared the hurdle of the first 10,000 and can now expect some good photos.

I shoot photos and then edit my shoot by eliminating dozens of photos on each assignment. The edited photos then go to the Post editors, who again edit the numbers down to fit the need or space for that day’s report. Most of the unpublished photos, no matter how good or poor, never get viewed by the public. With the invention of the Internet, more images are being seen. On the Salisbury Post website in the myCapture photos, you have the opportunity to see many of the photos that I send to the Post from an assignment. You can see what the editors have to select from that I submit to them.

As a photographer, I really don’t know what images I shoot that the public will see of value. I know that very few of the subjects of my photos ever purchase the photos, but I don’t think that means they have no value to them. Maybe the photos are of things they don’t want to remember, or they are of things that are so commonplace, they think, “Why would I want that photo?”

Sometimes, I see and photograph things I think are exciting or precious, but the viewer sees  something different from what I saw or intended. It is always painful that the viewers don’t see what I want them to see. I think I didn’t do a good enough job to convey my message to them. I usually don’t get an opportunity to explain why I shot a photo or why I like it or dislike it. Sometimes I shoot photos of things because I dislike the situation or fine it repulsive. Viewers then think how strange it is that I, as the photographer, would promote something so distasteful. I wasn’t. I wanted you to be aware of my dislike of the situation.

Ansel Adams once said, “A photograph is usually looked at — seldom looked into.”

Eighty-four-year-old photographer Jay Maisel said, “Once I came to an understanding that I was always selecting subjects I was excited to share with people, it hit me that the ‘feeling’ of a photograph comes from the photographer, not the camera, lens or even the picture itself. It comes form the person behind the camera. When I see a lovely bird, for instance, I am always thinking —‘Oh I wish so-and-so could see this!’ What that translates to is — I am excited about the subject enough that I want to share it with someone else. This ‘feeling’ that makes me want to share makes my images stronger.”

I have gathered a few photos I made over the past month or so and I would like to share with you that you may have missed. These photos were not printed in the Post, but to me they had something about them that I wanted you to pause and take a look. They are not “world-shattering photos.” I don’t think that I have ever photographed a “world-shattering photo,” but there is something in these photos to be seen.

To quote Ansel Adams again, he said, “Twelve significant photographs in any one year is a good crop.” Honestly, these photos I offer for your viewing in this article might not even be one of my top twelve for the year, but I want to share them.

There is a famous, anonymous quote about words with good photos: “I always thought good photos were like good jokes. If you have to explain it, it just isn’t that good.”

I think that a good photo should catch your attention and draw you to it, but the words help communicate the intent of the photographer or what crazy thing might have been going on at the time. It is sort of the story behind the photo. I tend to think that a photo might not be “worth a thousand words.” The photo might only be worth 999 words with one real good word of explanation. It actually deals with the question that all photographers ask themselves: “Why am I taking this picture?”

I always hope to picture happiness, sadness, emotions, common everyday situations that get ignored, or strange situations or events.  To paraphrase photographer Imogen Cunningham, I am always looking for my favorite photo that I am going to take tomorrow.

When Catawba College played West Georgia in the first football game of the year, I photographed Coach Curtis Walker talking with a referee. Walker was hot, with sweat running down his face and neck and was “hot under the collar” while talking to the ref. In Walker’s sunglasses was a perfect reflection of the referee. I loved that simple reflection in his glasses.

In the Crowder/ Dorsett Labor Day Golf Championship match, Drue Davis hit his shot into the sand trap on the eighth green. The trap is about 4 feet deep, so when Davis hit his shot out of the trap, the ball barely cleared the sand. The ball landed a few feet in front of Davis on the lip of the green. Davis peered up out of the hole at his ball. Actually, he had made a good shot, and I had made a good shot of him in that most unusual situation with him up to his shoulders in the trap.

I got a chuckle out of seeing a “Go Pro Cameraman” wearing a cowboy hat making a video of his slide down South Main Street in the Slide the City event in downtown Salisbury. Go Pro is the name of the small video camera that he is holding out in front of him. He is smiling, having a great time and enjoying his slide. It brought a chuckle to me, and I wanted to share.

At the Jesse Carson High School soccer match against Robinson High, a sliding Robinson’s Jose Arellano was able to get a foot on the ball as Khalid Myers made his drive from the corner toward the goal. Both players’ faces are very intense as they both take a tumble. I liked that key action moment and the  emotions of competition.

Later that same night at the Carson vs. Robinson football game, the rain was intense, causing the Carson cheerleaders to break out the clear plastic ponchos. The cheerleaders’ expressions reflected the dire situation that the home team’s play was creating. On a lighter note, the clear plastic ponchos reminded me of the produce and meats counter at the grocery store all wrapped in clear cellophane. I mean no disrespect to the cheerleaders, of course, as I was wearing a clear blue plastic poncho myself.  I looked more like I was from the frozen food counter at the store.

I would normally never use a photo of myself or even my shadow. It is supposed to be a bad photo if you get your own shadow or camera bag in the photo. However, I liked the photo with the sharp angles of the walkway coming to a point  at my feet that were created by the wide-angle lens that I was using on the camera. This is one of those, “Know the rules of composition, so that you can break the rule” moments. The photo was made during the 9/11 Memorial Ceremony at the Salisbury Firefighters Memorial in front of the granite statue and garden.