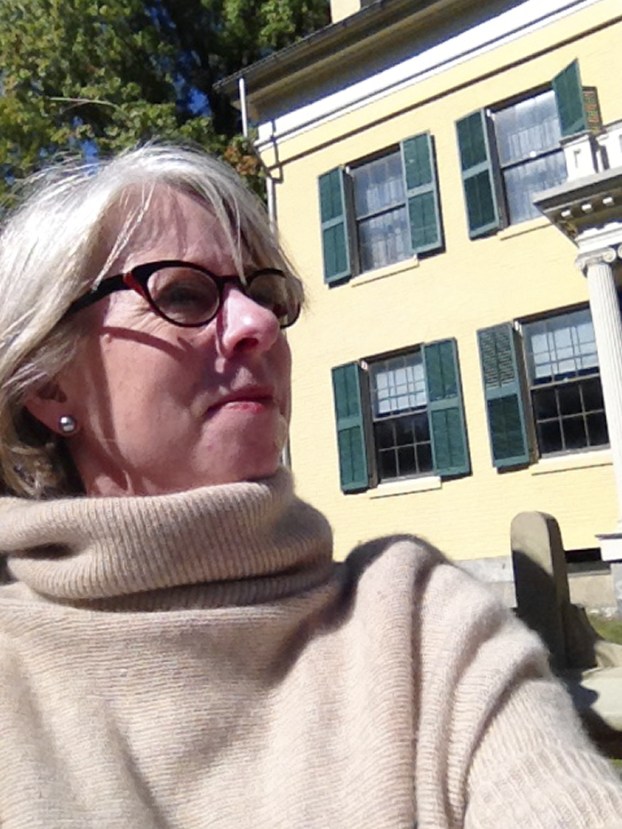 Jenny Hubbard takes a selfie in front of Emily Dickinson's house in Amherst, MA, a memorable trip bringing her closer to the poet.

On a Sunday afternoon in early October, I stand in what was once Emily Dickinson’s most private of refuges:  her bedroom.

While the tour guide describes the room’s most recent transformations, I have to lock my knees so as not to be shoved by some mystical force to the tiny desk three steps to my right.

To a writer, a great writer’s desk is a treasure trove of clues.  I knew the desk was small — I’d seen photos of it — enough space for a forearm, an inkwell, and a sheet of paper.

Like the other famous writer’s desk I’ve traveled miles to see (Jane Austen’s), the only person capable of fitting one’s knees beneath it is child-sized.  Emily Dickinson was (she once described herself as a wren), and so are her poems. But their voice, their originality and vision, packs a giant’s wallop. When the protagonist of my novel, “And We Stay,” a modern-day Emily, steals away to Dickinson’s house and sits at this desk, something cataclysmic inside of her shifts.

This desk, I learn, is a replica.  The actual desk where Dickinson composed most of her 2,000 poems is housed at Harvard, sold by a descendent in need of money. Harvard also owns almost all of the manuscripts, though I am able to witness on this pilgrimage to Amherst four of Dickinson’s original poems (the Jones Public Library), her white dress (the Amherst Historical Society Museum), and, in the archives of the Amherst College library, the only known image of the poet (a daguerreotype taken when she was 16 or 17) and a lock of her auburn hair, still brilliantly hued.

But here in her bedroom, what surprises me, on this autumn afternoon, is how bright it is.  In my imagination, it had been darker, more hiding place than studio, and I had always marveled at how accurately Dickinson was able to articulate the truths of the world from such a narrow vantage point.

But now I see how she did it. The room has four large windows, two facing south and two facing west.  She would have viewed not only the Main Street traffic, but also the buildings of Amherst College (founded by the same grandfather who built this house), pastures and woodlands, the Pelham Hills in the distance, and—most importantly—the sunset.

Dickinson was a poet most moved by periods of transition, and, with this view, why wouldn’t she be? She watched day fade to dusk; she saw summer stepping toward autumn, and autumn toward winter. During her most prolific writing period, her early 30s, as she turned from maid to spinster, the Civil War raged, transforming the nation.

Dickinson’s other sacred space, her garden, was a metaphor of transition.  I expected, in the landscape of my imagination, to feel her presence in the yard around the house, and I do. Dickinson loved flowers, and the garden, though in need of a good weeding, is filled with blooms. The golden light of October drapes itself over the 200-year-old oak, a favorite tree of Dickinson’s. Yes, she would have stood here beneath it, right where I’m standing.

In a wide circle on the grass are hundreds of acorns, compact as the poet herself.  Seeds, literally and figuratively.

I choose two to take home, which now sit on the mantel in my own light-filled bedroom. As a child might, I name them.  (The one with the elfin cap is Emily; the other one is Jenny.)

Gotta Run: Upcoming races and running in the rain

This column will be a regular part of your Sunday paper as we go forward. Salisbury and Rowan are the... read more