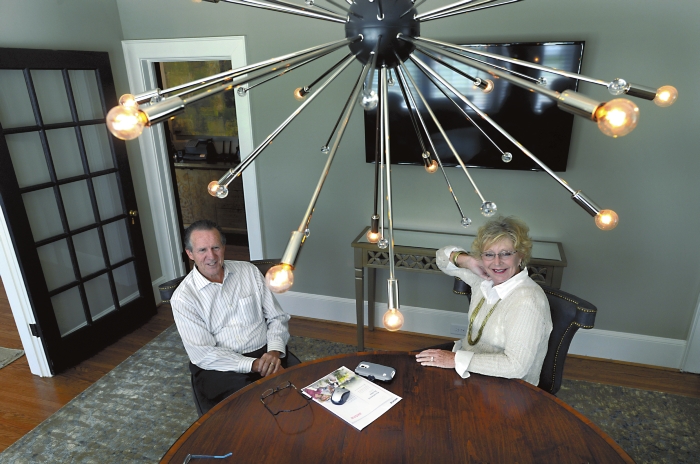 Mike and Jane Fesperman sit in the conference area of their new office under a chandelier that is in a newly renovated home in Rockwell. photo by Wayne Hinshaw, for the Salisbury Post

ROCKWELL — Mike Fesperman likes to say he and his family turned a lemon into lemonade when they remodeled the house at 132 W. Main St.

To be more precise, they turned a Main Street eyesore into an impressive office for the Fesperman Agency Insurance & Retirement Services — such a turnaround that strangers stop in and ask to take a look around.

Curious passersby who want to do the same won’t have to come up with excuses to see the Fespermans’ project today. The agency is holding an open house from 4 to 6 p.m., and is inviting the community to come see.

To fully appreciate the transformation, you have to hear the story of how the Fespermans finally bought the house, 30 years after Mike made his first offer. Or maybe you should go back further, to 1932, when Ray Barnhardt built the brick, three-bedroom house two doors down from Ursinus United Church of Christ.

Barnhardt was a pharmacist and apparently a believer in quality construction. When his home was being constructed, Barnhardt wanted it to last. Where plans call for one nail, he directed workers to put two.

The Barnhardts took great care of their home and kept a meticulous lawn, Mike says. Marcus “Handy” Green carefully cut the grass for them in a criss-cross pattern. The “Yard of the Month” sign showed up at the Barnhardts’ with great regularity.

“We grew up here in Rockwell,” Jane Fesperman says. “As children, we would walk by. … It was immaculate.”

Which made people all the sadder, after Barnhardt died in 1982 and his wife died in 1985, to see the property fall into decline.

“It broke our hearts,” Jane says.

Mike, whose agency office was across the street, found out who the heir was and sent her an offer to buy the house for $75,000, along with a $500 check to prove he was serious.

Three weeks passed with no response, so he called the woman in Birmingham, Ala., and asked what she thought. She said she had seen the envelope but not opened it yet. Once she examined the offer and the check, she told Mike the house was “so tied up” in a trust and could not be sold. She asked, what do you want me to do with this check?

The sound of her tearing up the check came across the line loud and clear, and Mike dropped the idea of owning the Barnhardt house.

But moving his business into that house just felt meant to be.

First, his son Alan came to work with him early this year. That, too, was a long time coming.

Alan had gone to college to major in business and take over the firm, but his interests turned to being a pilot instead. He flew for Food Lion for many years, until the company streamlined and went from two planes to one. Allen found two piloting jobs to take its place, for Robert Yates Racing and Strategic Moves, but his schedule became unpredictable.

The tipping point came when he broke a promise to attend 6-year-old daughter Josie’s school program in order to pilot a last-minute flight. “I had to tell her I had to work that day,” Alan says. It wasn’t the first time.

Mike, 64, had reached the point in his career when he was going to have to prepare for retirement and hire someone to run the business. Years after he had first asked Alan to join the agency, and three months after Mike made the offer again, Alan finally said yes early this year.

The second sign of how God works was this: Three weeks after Alan agreed to join the firm, a “For Sale” sign appeared in front of the Barnhardt house.

Jane remembers the moment. “And I said, it’s going to be a ton of work.”

There were a few twists and turns, but finally the Fespermans bought the house in early February. Through a happenstance encounter, they reconnected with Stewart Grubb of Denton, who had worked on a floor for them before, and hired him to remodel the house into an office.

“That was the best five minutes of this whole ordeal,” Alan says.

Grubb had a knack for looking at photos Jane showed him or hearing suggestions and quickly getting the work done — from building a copper-trimmed portico out front to creating a coffered ceiling in Jim’s office.

“It didn’t matter what we asked him,” Mike says. The answer was always the same: “Yeah, that’s no problem.”

Only one wall had to come out, to make the reception area bigger. But most of the floor plan is exactly as it was in 1932. Amazingly, so is the deep, plaster molding in the front rooms and the beautiful oak floor throughout — protected for years by wall-to-wall carpet.

Which brings up another reminder of the quality Barnhardt insisted upon. The man who had to pull up the carpet — Bob Thompson, who does maintenance for the Fespermans — was the person who, at Barnhardt’s instruction, had used 8-penny nails to put in the carpet tack strips in the 1960s, when he worked for Sides Lumber. He wished he hadn’t been so thorough.

The Fespermans kept the original, metal kitchen cabinets, having them painted at a body shop and adding new hardware. New beveled subway tile serves as a backsplash.

Outside, they painted the house shell white — both because they liked the painted brick look and to cover some irregularities in the brick where changes were made for a doorway and new windows. The first primer coat was ugly and seemed to concern some folks, but they’re pleased with the final product. Trim around the windows is painted bronze.

“I knew all along I wanted that,” Jane says. She had seen the color combination on other houses. “I felt soothed around it.”

The Fespermans have experience with remodeling. They own 45 rental houses, half in Rockwell, half in Salisbury.

“When we first started off, we were dirt poor,” Mike says. “We would buy a house, paint it, fix it up.” Sometimes they bought them in groups, like the day they bought 10 houses.

“My philosophy in life is this. I tell tenants, if I wouldn’t live in this, I wouldn’t rent it,” Mike says. And he wouldn’t offer a policy he wouldn’t accept for himself. “I believe in what I do. I love helping people.”

The Barnhardt house, the house that’s now an office, may be the most special one they’ve worked on.

“The old house was made for us,” Mike says.

His office has a sleek, black desk, flanked on two sides by big windows.

“For 33 years, Mike worked in an office with no windows,” Jane says. “Now he’s on sensory overload.”

If he wants to be soothed, all he has to do is look at the portraits of his five grandchildren on the opposite wall — Alan’s children, Josie and Warren; and Shannon’s children, Margaret, Will and Ella.

“I’m happy for him,” Jane says. “He really worked in a little box for so long.

“And it’s a good legacy to leave our son.”