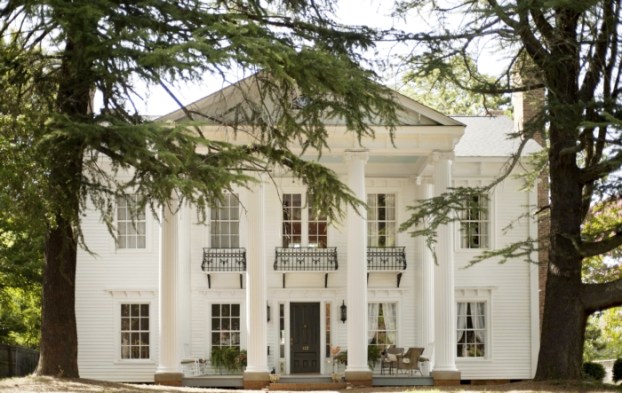 Beth and Glenn Dixon and their talented team of craftsmen have completed the 13-month project of restoring the Blackmer House. Jon Lakey/Salisbury Post

You don’t have to be a preservationist be in awe of the Blackmer House at 112 S. Fulton St.

Officially, the house is called the Fulton-Mock-Blackmer House on this weekend’s OctoberTour itinerary.

Thirty years ago, people were calling it something else. Goner. Lost cause. Tragic loss.

Fire had ripped through the once-stately home of actors Sidney and Suzanne Blackmer on Dec. 1, 1984. Already a faded beauty, the house appeared decimated after the flames did their work. Little more than a shell remained, and a charred one at that.

The fact that the house has finally been restored and now is on Historic Salisbury Foundation’s annual tour is a testament to preservationists’ tenacity and patience. They shored it up enough to keep out the elements until the Blackmer heirs were ready to sell the house.

Let the record show that the name “Dixon” deserves to be added to the Fulton-Mock-Blackmer House’s provenance. Beth and Glenn Dixon earned at least that much by tackling this restoration project, with the help of skilled craftsmen and contractors.

Each year, OctoberTour highlights restoration success stories and reminds Salisbury of all that has been saved. Most restorations are not as dramatic as that of the Blackmer House. But if you wound the calendar back to the 1970s and walked through the area now  known as the West Square Historic District, you might think you were in another town. Many of today’s majestic homes were then neglected rental houses, divided into apartments and allowed to deteriorate..

Saving old houses is not just a romantic notion. It’s a form of economic development — showing the world that residents value the neighborhoods and structures past generations built. The homes’ fine materials and sturdy construction cannot be replaced. Neither can their stories.

The world would have continued to turn without the Blackmer House, if someone had torn it down after the fire. Instead, we have its ongoing story — not something to be missed, but something to build upon.

Which brings me to Sarah Kirkland Snider’s musical composition presented recently by the N.C. Symphony in Raleigh.

Snider is the granddaughter of the late Arnold and Kate Mills Snider, whose former home on North Fulton Street is now a bed and breakfast. Her late father, Arnie, grew up here.

The N.C. Symphony commissioned the young composer’s latest work, “Hiraeth.” The Welsh word has no direct English translation; it communicates homesickness tinged with grief or sadness over the lost or departed.

Dan Ruccia, who reviewed the symphony’s performance for IndyWeek, found much to like about the piece. The headline on his review said the work “thrums with the persistence of memory.”

“For Snider, that lost homeland consists of memories of childhood visits to her grandparents in Salisbury, North Carolina, shot through with grief for her father, who died shortly after she started writing the piece. Unsurprisingly, the music is quite dark, though never grim.”

We all probably experience a form of hiraeth at some time in our lives, longing for what we can never have again — the secure warmth of sitting in a parent’s lap, the aromas and chatter of Thanksgiving dinner at Grandmother’s table, the munchkin-like voices of children long grown up.

Is that past dead to us? Is it gone forever? William Faulkner said it was not. “The past is never dead,” he said. “It’s not even past.”

The past is alive in our memories, our music — even our houses.

The frustration among members of the Granite Quarry Board of Aldermen is palpable when it comes to the U.S. Postal... read more