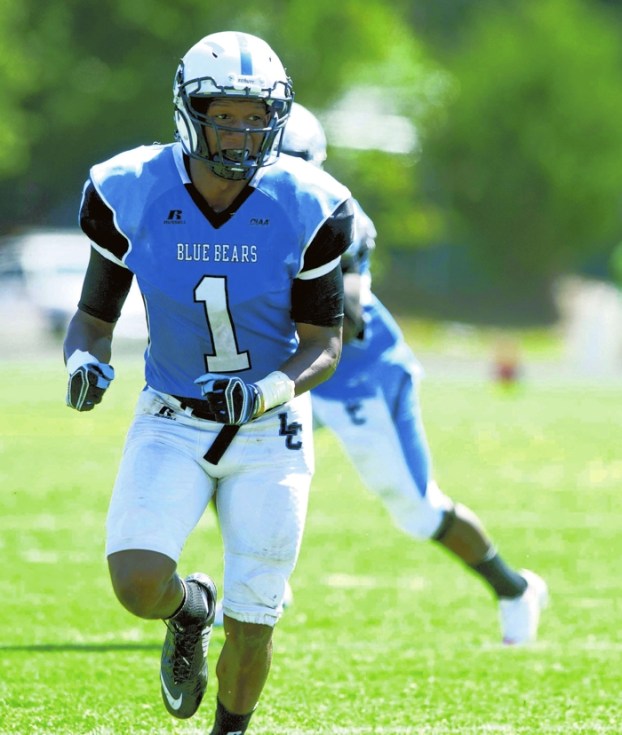 RALEIGH — For the second straight week, Livingstone had to play football in the rain.

However, here yesterday against winless St. Augustine’s, the Blue Bears had no turnovers and 358 total yards in a 31-7 pounding of the Falcons.

Quite the turn around from last Saturday in Salisbury when Livingstone turned the ball over nine times in even worse playing conditions, losing to Elizabeth City State, 41-6.

Livingstone is now 2-2 overall and 1-2 in the CIAA, although the win gives the Blue Bears a 1-0 mark in the Southern Division of the conference. In addition, the Sept. 26 CIAA loss at Bowie State is expected to be nullified soon due to an ineligible player used in the contest by the Bulldogs.

St. Augustine’s, going through a nightmare season after dismissing its head coach in August, falls to 0-6 and 0-3.

“I’m very proud of our team for bouncing back like they did, after last week,” said Livingstone head coach Daryl Williams. “They saw what we are capable of when we don’t have turnovers. When you take care of the football, you can execute your game plan.”

Williams added that regardless of their record, the Falcons were a tough opponent.

“I told the team on Friday night that this was going to be a tough game because anytime that you go against a team that is winless, there is a fight in them to get a win — almost a desperation to get a win,” said Williams. “And they fought hard against us, for 60 minutes.”

It was sort of like old times as All-CIAA performers Drew Powell and Jalen Hendricks got their old magic back. Both are seniors and Powell, the quarterback, connected with wide receiver Hendricks nine times for 141 yards and three touchdowns.

“It was great to see those guys get back to what they do best,” continued Williams. “Drew played a very smart game, with only five incompletions, and Jalen had another one of his ‘days at the office,’ with 100-plus yards receiving.”

Leading 9-0 after the first quarter, Powell tossed a 6-yard scoring pass to Hendricks to really take command of the game. The play capped a seven-minute drive that covered 66 yards on 16 plays. The two-point conversion try failed and the scored stood at 15-0.

St. Augustine’s scored its only touchdown of the game with just 38 seconds left in the first half. Quarterback Julius Murphy hit Jordan Turkvant on a 10-yard pass for the score.

The Blue Bears re-established control on its first second-half possession in two plays. After a running play, Powell and Hendricks hooked up on a 49-yard TD pass. Leonardo Manzo’s extra point kick made the score 22-7, and Livingstone never looked back.

Powell connected with Hendricks again before the end of the third period, this time a 16-yard scoring pass.  The try for two points failed again and the Blue Bears led, 28-7.

Livingstone pretty much kept the ball on the ground in the fourth quarter and the only scoring was a possible school-record 54-yard field goal off of the toe of Manzo. Reportedly, the kick was good with yards to spare. St. Augustine’s has field turf, so the spot had to be better for Manzo than kicking on wet grass or mud.

“That kick was center-cut, and would have probably been good from 57 or 58 yards,” said Williams.

Livingstone churned out 166 yards on the ground on 50 attempts, in addition to the 192 yards from Powell through the air. Running back Jarius Richardson led the rushing attack with 94 yards on 23 carries. Latrell Flowers added 60 yards on 16 attempts.

“The offensive line played well all day and it was like we were running downhill, especially late in the game,” said Williams. “The defensive line was solid as well.”

That defensive line allowed just 13 net rushing yards to the Falcons, who like Livingstone, passed for 192 yards. QB Murphy was 17 of 33 for 172 of the yards, but he did throw two interceptions — one by the Blue Bears’ Billy Moore and another by Todd Finney.

Livingstone defensive back Jarod Richardson led the way with nine tackles while DeAngelo Dickinson had eight stops. Marcus Nolan made seven tackles, including a sack.

Jarius Richardson had a seven-yard touchdown run in the first period, after Manzo had given the Blue Bears an early 3-0 lead with a 36-yard field goal.

The Blue Bears return to Raleigh next Saturday for a 1 p.m. contest against Shaw.