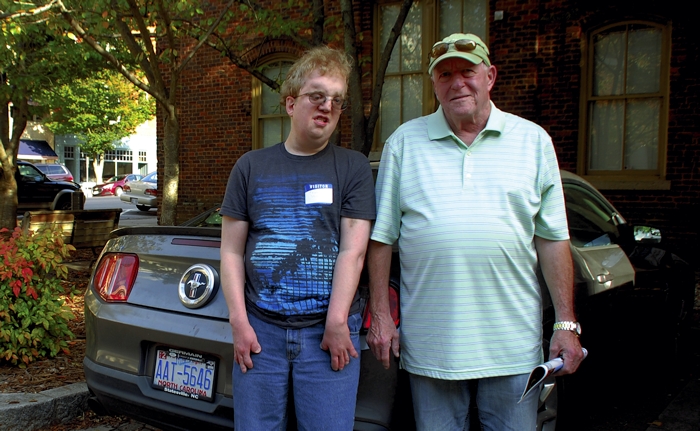 Mark Wineka/Salisbury Post Andrew Stirewalt, left, and Brien Nussman team up on Mondays and Tuesdays to deliver Meals on Wheels in southern Rowan County. Those duties are just part of an always busy week for Stirewalt.

Andrew’s actions during a recent Meals on Wheels delivery reinforce what Cherry has known for a long time.

“He is just a wonderful human being,” Cherry says. “It warms my heart, and that’s not just PR mumbo jumbo.”

Andrew and his Meals on Wheels partner, Brien Nussman, laugh when they hear how Cherry’s version of the story makes it seem as though something heroic happened.

“That’s when it took on a life of its own,” Nussman says, hearing Cherry has been boasting about them. “We just work together real well.”

The men say they were simply doing what’s expected of any Meals on Wheels volunteer.

One day not long ago, Stirewalt and Nussman were on their Lakewood delivery route in China Grove when they reached the home of a man in his 80s, who had only recently returned from a stay in the hospital.

The man’s wife had died earlier this year, so a hired caregiver has been staying with him most every day. Unknown to Stirewalt and Nussman, the woman had called in sick, so their client was home alone.

When they arrived at the house, Stirewalt and Nussman assembled the hot and cold elements of the man’s meal and walked to the door leading into the house from the garage. Andrew knocked, but there was no response. From where he was, Andrew could see into the living room.

“Brien, he’s on the floor,” Stirewalt said. “Something’s not right.”

The door was open, and they hurried inside. The man was conscious and able to speak. He said he had fallen about 15 minutes earlier. He didn’t think he was hurt, but he definitely wanted to get on his feet.

“He just couldn’t get up,”  Nussman said.

The men helped their client to a comfortable seat and asked him who they should call.  The man answered his son-in-law was due in a few minutes to take him to a previously scheduled doctor’s appointment, and he assured them he was OK.

“We felt comfortable leaving him there with the son-in-law coming,” Nussman said, “and we checked in later with Meals on Wheels to make sure he was all right. Andrew and I were just happy we got him up.”

So goes a day in the life of Andrew Stirewalt. Andrew, who is 30 and developmentally disabled, works daily at Rowan Vocational Opportunities. His main job is tearing up sheets of corrugated cardboard that is used in packaging materials for Hitachi.

On Mondays and Tuesdays, Nussman picks him up at RVO, and they take care of their Meals On Wheels route. One day they’ll go to homes on the east side of Kannapolis. The other day they deliver lunches to homes in Lakewood.

Stirewalt counts up the years on his fingers and says he has been volunteering for Meals on Wheels since 2008.

Stirewalt is in the Action Club at work. On the first and third Mondays of a month, he attends the Civitan-sponsored dinner meetings at Pancho Villas. Andrew was recently elected president of that group.

He’s also a board member of The ARC of Rowan. At his home church, Mount Moriah Lutheran in China Grove, Stirewalt serves on the Evangelism Committee. He also is an usher, greeter and, on certain Sunday mornings when a friend can’t make it, the church bell ringer.

Stirewalt has the unusual hobby of collecting church bulletins.

“I bet he knows more about the churches in Rowan County than the Synod office,” says his father, Larry Stirewalt.

And that’s definitely a compliment.

Nussman marvels at Andrew’s memory for the Meals on Wheels clients and which ones have special dietary needs. The men spend considerable time together and know each other like a book.

Before Nussman drives Andrew back to RVO, he often makes sure Andrew has his favorite dish — macaroni and cheese — from Jimmie’s Restaurant in China Grove. It’s at the restaurant and on their deliveries that Nussman notices how social Andrew is.

“I’ve lived in Salisbury 69 years, and I don’t know if I’ve ever seen anybody who knows everybody like him — maybe Norman Ingle,” Nussman says. “If he doesn’t know you, he’s going to get to know you.”

Nussman says he and Andrew have a lot of conversations in his Ford Mustang as they travel their Meals-on-Wheels routes. “And he likes to ask you questions he knows the answers to,” Nussman says.

That stays between heroes, by the way.