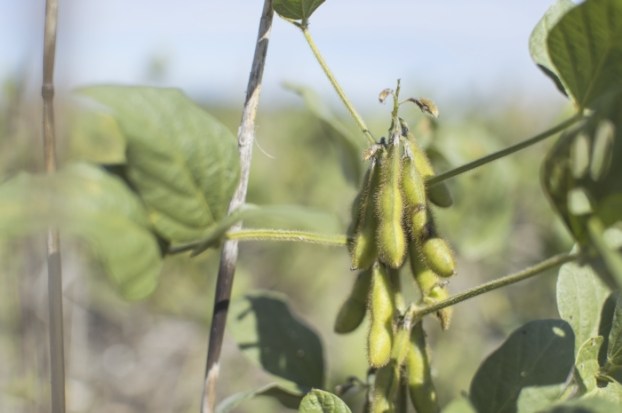 Josh Bergeron / Salisbury Post - Soybeans hang off of a plant near the Piedmont Research Station in western Rowan County. Despite the recent rain, some soybeans aren't expected to see positive yield numbers.

Rain comes too late for some soybean crops in Rowan

In the previous two weeks, Rowan County received more than seven total inches of rain in most areas. The rain erased drought from North Carolina, according to a Thursday update of the N.C. Drought Monitor. It’s the first time since May 5 that no part of the state shows unusual dryness. At one point, all of Rowan was classified as being in a moderate drought — the second of five drought stages.

But the drought has already taken its toll.

Corn yields in Rowan plummeted during harvest earlier in the year. Now, soybean yields in some areas could face a similar fate.

Soybean fields in some areas of the county — particularly the western portion — show signs of stunted growth. And, with the growing season drawing to a close, crops may not have time to catch up, said Piedmont Research Station Superintendent Joe Hampton.

“Everything is seasonal,” Hampton said. “With the days getting shorter, soybeans are not going to grow now like they would back in July when the days were a lot longer.”

Hampton said the Piedmont Research Station’s soybeans simply aren’t responding to the added moisture steadily sprinkled across the region. Other areas of Rowan, Hampton said, may have seen enough rain during the soybean growing season to produce reasonably healthy crops.

The sudden infusion of moisture could also lead to disease in some cases, she said.

Precipitation during the previous two weeks, however, provide a positive outlook for grains planted in fall, Hampton said.

“The good thing about the rain is that it was a soaking rain,” Hampton said. “During the last ten days, it drizzled almost constantly. It was a rain that penetrated the ground and didn’t run into a ditch.”

Based on typical farming practices, Hampton said fall grains would be planted within the next few weeks and harvested in May 2016.

According to National Weather Service maps, Rowan received a minimum of six inches during the previous two weeks. Recent precipitation may wipe out the state’s drought classification from Rowan and North Carolina, however, some swaths of the country still have below average rainfall totals for the year. Portions of Rowan east of Granite Quarry contains the largest sections of land still below average, according to the National Weather Service.

Questioning the purpose and need for HBCUs needs to stop, according to local colleges. In the midst of dropping attendance... read more