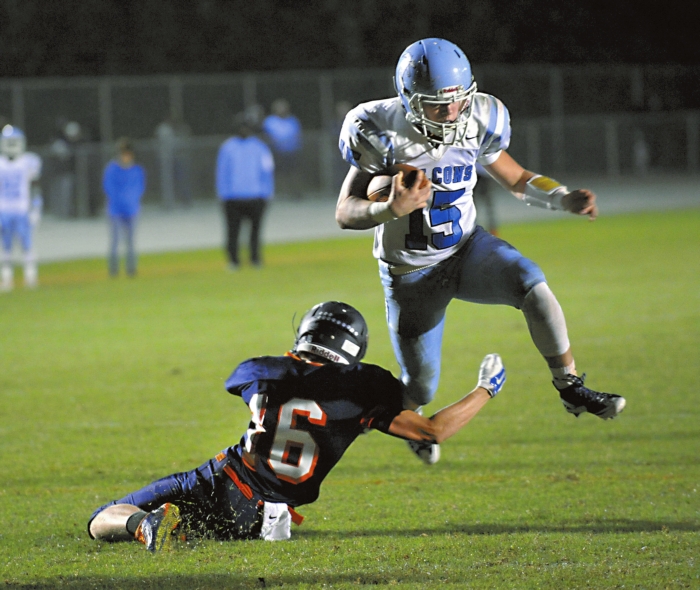 Wayne Hinshaw/For the Salisbury Post ... West Rowan’s Kacey Otto (15) jumps over Carson’s Cameron Rayfield (16) on his way to a touchdown in last Thursday’s win by the Falcons. Otto passed for 110 yards and ran for another 117 in the game.

MOUNT ULLA — Five Rowan County football teams have different quarterbacks than last year.
Four of those teams graduated QBs who started for at least two seasons and rank high on their respective school’s all-time passing charts.
One reason West Rowan is currently 5-1, while the rest of the county is a combined 7-23, is that the Falcons have Rowan’s only returning starting quarterback.
Kacey Otto quarterbacked eight West Rowan wins in 2014. This season he leads Rowan County in passing yardage (657), while ranking third in rushing yardage (402).
“The biggest thing is that he’s played in a lot of big games,” West coach Joe Nixon said. “He’s got a lot of experience on Friday nights and he gives us a lot of leadership as a team-first guy. Our job is to put him in positions where he can be successful.”
It’s hard to imagine, but this is the same Otto who was a battering-ram fullback as a sophomore. Basically, he was a blocker in those days for Daisean Reddick, Keyows Weeks and Harrison Baucom before transitioning to quarterback as a junior.
Besides a hard nose, Otto’s skill set includes good speed and a strong arm.
He led West’s SPC-champion baseball team in RBIs as a junior, and he’s well-known to Rowan County American Legion baseball fans as the center fielder for a team that won the state championship. Otto batted .290 with 24 RBIs and his speed and arm made the difference in several games.
Rowan County Legion’s long baseball run meant Otto missed most of the summer’s football activities. That was a concern, especially with West making a head-coaching change from Scott Young to Nixon.
“I was committed to baseball this summer, but, fortunately, I didn’t get too far behind in football,” Otto said. “This year’s offense has a few differences, a few things I’ve had to learn, but it’s mostly the same thing.”
Otto’s value to the Falcons goes beyond what he does at quarterback. West also has a sophomore QB (Bryant Young), and the Falcons have been able to pick spots where they can use Young’s passing ability. When Young, who has three touchdown passes, enters the game at quarterback, Otto doesn’t go to the sideline, he just moves to running back.
That was an important factor in Thursday’s 28-7 win against Carson because the Falcons were missing starting running back Jovon Quarles, who was out with an ankle injury.
“Kacey’s versatility really helps us,” Nixon said. “We want to be as multiple as possible, and his ability to play different positions is a key to us being able to do some different things. Teams have to account for him and he’s going to be lining up in different places.”
One of Otto’s favorite moments this season is when he lined up as a slot receiver against Northwest Cabarrus and caught a pass from Young.
Otto is also the Falcons’ punter as well as the holder on PATs and field goals.
“It’s been kind of like what I was doing my freshman year on the jayvees,” Otto said. “I didn’t have a defined role then. I just filled in whatever spot needed filling. People ask me if I get tired playing on special teams, but it’s not too bad.”
Otto enjoyed the first 100-yard rushing game of his career against Carson, but his biggest play was a 95-yard touchdown pass to Juwan Houston late in the first half. Carson had just scored and had West backed up inside its 5-yard line, but the Otto-to-Houston bomb gave the Falcons a 21-7 lead and the momentum at halftime.
“We had a heavy set in the game, and Carson was expecting us to run the football,” Nixon said.
West had both of its standout receivers — Houston and Kortez Weeks — lined up on the right side. Weeks exploded on a takeoff route and attracted double coverage. Houston ran a post, against single coverage, and Otto made the correct read and an accurate throw. Houston’s wheels did the rest. It was one of the longest pass plays in county history.
“We’ve got two great receivers,” Otto said. “When we get them in man-to-man coverage, it’s a good situation for us. They’ll usually have the advantage.”
Otto has run the ball more than he’s thrown it (76 rushes, 73 pass attempts) this season. With the exception of the Davie game when Otto was 17-for-27 for 189 yards, the Falcons have been committed to pounding away on the ground behind an experienced offensive line.
In the Falcons’ last three games, Otto has put the ball in the air only 18 times, but he’s been exceptionally efficient with 14 completions, four TD passes and no interceptions.
“I just try to make those passes count,” Otto said.
He’s doing that, and the Falcons, fierce on defense since a 28-26 loss to Mooresville on opening night, have established themselves as contenders in the SPC. They’re 4-0 in the league.
Otto has completed 64.4 percent of his passes this season.
Career-wise, Otto stands at 1,977 passing yards — fifth in West history behind B.J. Sherrill, Tim Hogue, Bryan Aycoth and Jared Barnette.
In total offense, rushing plus passing, he has accumulated 2,704 yards, ninth in school history behind K.P. Parks, Sherrill, Hogue, Dinkin Miller, Wade Moore, Aycoth, Joe Jackson and Baucom.
On the total offense chart, Otto moved past former West star and current North Rowan coach Ben Hampton with his outing against Carson.
“He had a big game,” Nixon said. “When you have 100-plus passing and 100-plus rushing in the same game, that’s a great game.”