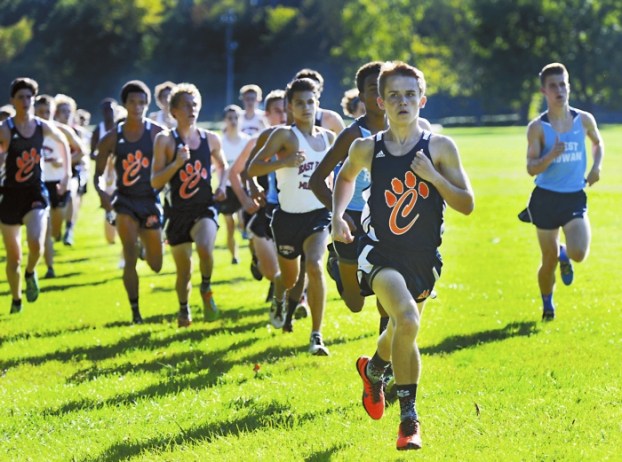 Wayne Hinshaw/for the Salisbury Post ... The start of the Rowan County Boys Cross Country meet has Zachary Marchinko (Carson), in the center, on the point leading. He led the entire race and was the county champion.

SALISBURY — Anyone looking for a few good men could have found them at Dan Nicholas Park on Wednesday evening.
Conor Honeycutt, 2013 and 2014 Rowan County cross country champion, is headed for United States Marine Corps Force Reconnaissance duty on Nov. 3, but he was on hand for his last public act as a civilian.
Honeycutt, who starred at East Rowan, dished out medals to the top 12 finishers, including Carson’s Zachary Marchinko, a worthy successor to Honeycutt as county champion. Last fall’s runner-up, Marchinko cranked out a blistering 15:44, erasing Honeycutt’s meet and course record, and leading Carson to its second straight team title.
Honeycutt smiled as Marchinko walked up to receive his medal, shook hands with his former adversary, patted him on the back, and officially passed the torch.
Marchinko, a senior, set a blazing pace, charging through the first mile in 4:40 and opening a lead over a competitive pack that included Marchinko’s teammates Garrett Ingold, Dylan Koontz and Grant Doby, East Rowan’s Sean Incardona and West Rowan’s Andrew Burgess.
“I went out fast, but I was still pretty relaxed and comfortable,” Marchinko said. “I felt under control. It was hotter than it has been, but once I got going I didn’t feel the heat.”
Ten minutes into the race, Marchinko had separated himself from the field, had completed two miles of the 3.1-mile course and basically was running against himself and the ticking clock.
“Zachary had two sub-par races — for him — prior to this one, so I was really pleased with how he ran today,” said Robert Marchinko, Zachary’s father and Carson’s coach. “He dealt with adversity very well. Running the time he did with no one to really push him was outstanding. He had a very good day.”
So did all the Cougars. Ingold, a tall senior, took second in 16:56. Koontz, another senior, placed fourth, Doby, a junior, took fifth. Nick Cox, also a senior, was seventh. It added up to a 19 for the Cougars, but they still weren’t quite as dominant as they were in the pre-county meet where they went 1-2-3-4-5 and posted a perfect score of 15.
“We ran well as a team, and that was the biggest thing,” Zachary Marchinko said. “We had six all-county runners. That says a lot.”
Incardona, a sophomore, was determined to break the Cougars’ monopoly on the top spots, and it took a furious closing kick by Ingold to push him down to third. Ingold nosed out Incardona by four-tenths of a second in the most dramatic duel of the day.
“He passed me late (with 400 meters left), but I knew I wanted second,” Ingold said. “I went for it.”
Incardona, stepping forward as East’s lead runner, was OK with third. After all, his 16:56 clocking was the first time he’d ever broken 17 minutes.
“Carson was projected for a perfect score, but at least we stopped that,” Incardona said. “There was some pain today, but you always expect pain. It’s just a matter of how much pain are you willing to take, and today I fought through the pain and stayed fast.”
Incardona’s effort and that of Burgess, a West sophomore who took sixth, broke up Carson’s bid for perfection, but Coach Marchinko wasn’t disappointed. It’s not like his guys slacked off — it was just that Incardona and Burgess ran exceptional races.
“We’ve been a little flat the past two weeks, but I thought we competed better today,” Coach Marchinko said. “There’s a lot of history here (dating back to 1985) and this event always is high on our list of goals. It’s great to repeat as champions.”
East Rowan’s score of 50 edged West Rowan’s 59 for second place. Salisbury (113), South Rowan (159) and North Rowan (175) were next in line on a course where park workers tirelessly restored most of a trail that suffered in the recent hurricane.
Rounding out the top 12 and receiving medals and all-county status were: 8. Cameron Butler, West. 9. Nikolas Pillsbury, East. 10. Michael Anton, West.1. Ross Alexander, East. 12. Jonah Evans, Carson.