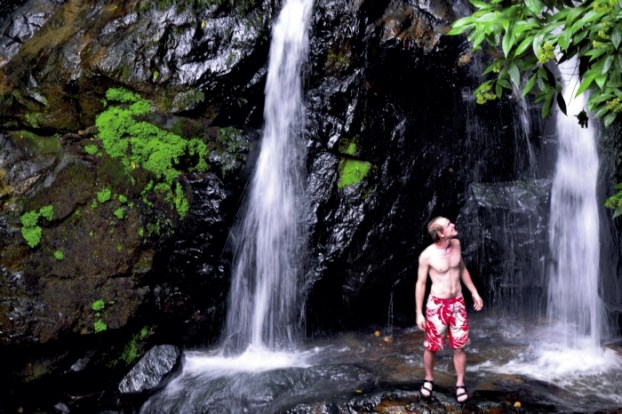 It was a very sunny, muggy day in late June when our guide led me and the other interns through the forest to the research station. After months of planning and anticipation, we were finally arriving at La Mica Biological Research Station in Panama.

I was focused on my upcoming research as we climbed up a hill, being careful to not step on the fallen mangos towards the station. A couple of butterflies were seen fleeting through the forest, and I was excited for what the next three weeks would hold.

We emerged quite suddenly out of the dense forest to into a large clearing. What I saw took my breath away.

There were several butterflies fluttering lazily about the hillside. As we walked to the bottom towards the river, a whole group butterflies which were imbibing minerals from a damp spot scattered into flight. There were Apricot Sulfurs (Phoebis argante), Cloudless Sulfurs (Phoebis sennae), and many other species.

When they became alarmed, the whole group of them erupted into the air and were swirling about for several hours in a whirlwind of orange and yellow wings. While standing there looking at them dancing above the hillside, I thought about how cool it was that I was there doing the research, and how it was that I came there.

I knew that I wanted to do a research internship during the summer. During a discussion with Dr. Jay Bolin, an assistant professor of biology at Catawba, about what I wanted to do, he suggested that I should contact Dr. Julie Ray, a colleague of his who does snake research and operates a research station out of the Coclé province in Panama.

I worked with both of them to form a research project that would help confirm or find the butterfly species in the area.

While there, I was also to assist the other interns in their research. Two other Catawba students, Tabitha Turenchalk and Britt Parsons, were interns as well.

The three of us, led by Tabitha, were to conduct research on the symbiotic relationship between sloths and algae.

The first week was spent visiting multiple sites where we believed sloths may be found. Several long days we hiked in Omar Torrijos National Park looking for sloths in the Cecropia trees, as well as continuing my butterfly survey.

We learned an important lesson about research, and science in general, during our time there. Despite the months planning for the trip and for the research, our research ended without the results we wanted, because we were not able to find any sloths. Tabitha and Britt both were reassigned to work on different projects. I was able to continue with my butterfly survey through the end of the three weeks.

There was something quite peaceful about spending the mornings and evenings walking around looking for and observing the butterflies, trying to snap pictures of them as they went about their lives.

Several times, our research took us up into Omar Torrijos National Park. This park was an hour uphill hike to the park entrance, but the species diversity as well as the view inside the park were well worth the trek.

The park is in a cloud forest, meaning the forest receives a lot of precipitation, but most of it is the clouds engulfing the mountain tops.

Every new species that I saw left me excited and wanting to know more about each.

Dr. Joe Poston, an associate professor of biology at Catawba, worked with me on my methods prior to departing for Panama. He had documented the butterfly species in the Stanback Ecological Preserve at school, so he was a great resource.

The research I conducted in Panama allowed me to receive course credit as an internship through Catawba.

Since being back at school, I have continued my research by identifying the species that I saw in Panama. I am confirming each species, and will compare the species that I have seen with the officially recorded and known butterfly species in Panama, and more specifically the Coclé region. I will be developing an educational resource of the most common butterflies that I saw during my internship.

Taking the opportunity to go to Panama really enabled me to pursue my passions for biology, the environment, research, butterflies, photography, travel and culture.

Schlaudt, of Richmond, Va., is a member of the Catawba College class of 2017.