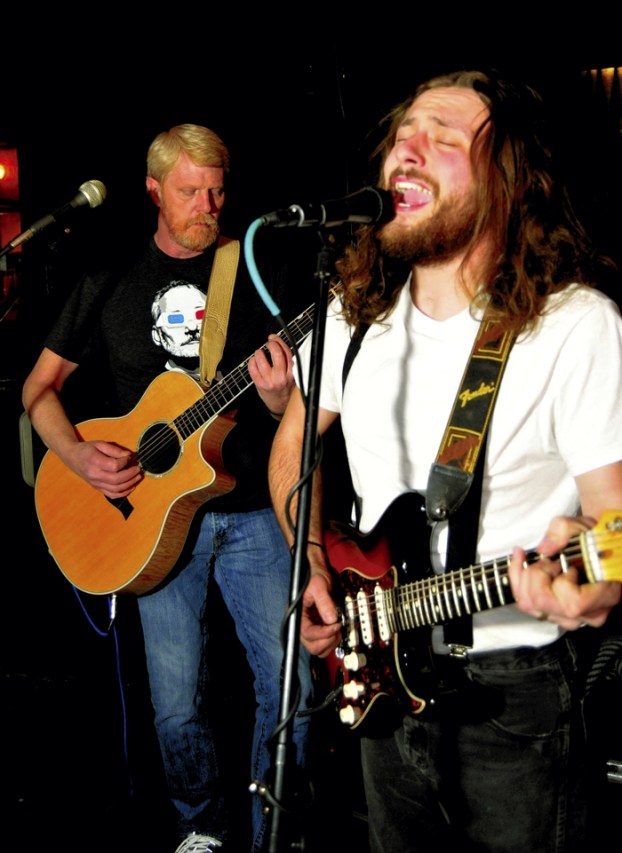 Friday night from 5 to 9 p.m. Downtown Salisbury celebrates the kick-off to the 40th anniversary of Historic Salisbury Foundation’s tour of historic homes. Stroll around the downtown shops or hop on the trolley to cruise more than 20 blocks of historic sites and autumn beauty.

In honor of Breast Cancer Awareness Month, Novant’s mobile unit will be stationed on East Fisher Street. Schedule an appointment at 704-210-5924.

Don’t miss live music beside Griffin Guitars on South Main from 6 to 9 p.m. with performances by Goof Troupe from 6-7:30 p.m. and musical duo Seth Griggs and Scott Cody (shown at left) from 7:30-9 p.m., as seen at September’s Best Busker’s Bash Contest.

Buskers are always welcome to attend downtown events and perform on the sidewalks.

Kicking off the Salisbury Symphony’s 2015-16 season is a concert filled with the themes of victory and triumph. “Triumph” will be presented Saturday, Oct. 17, at 7:30 p.m. in Keppel Auditorium. Featured performer is Dr. Renee McCachren, music theory and music history teacher at Catawba College and director of performance concentration. Tickets may be purchased in advance at   www.salisburysymphony.org or 704-637-4314. Read more about the Symphony’s season opener in the Sunday Salisbury Post Lifestyle section.

Piedmont Players Theatre (PPT) announces the second season of its Youth Theatre Academy. Directed by director and choreographer Gwen Matthews, the program is designed around students who have a passion for theatre and a desire to improve their skills and techniques. Matthews, along with instructor Laurie Klaus, will guide students through a structured curriculum spanning 16 weeks. The program begins Oct.12, with a break in December and resuming in January. This year’s program offers two new classes and expands the age range to include 1st-12th grades. Register at 704-633-5471 or visit the PPT Offices on the second floor of the Meroney Theater, 213 S. Main St. Complete details are at PiedmontPlayers.com

Mean Mug’s new Team Trivia Night will debut Wednesday, Oct. 14 from 7-9 p.m., hosted by Erin Basinger, and continue on the second Wednesday each month. Here’s how it works: Participants put together a team of 2-6 players. Erin presents four rounds of 10 questions from the following categories: History, Science, Math, Geography, Literature, Animals, Sports Music, Movies/TV and Food. Points are awarded for correct answers. At the end of the four rounds, teams will wager points on bonus questions. Team with the most points at the end of the evening wins. Prizes will be awarded. Mean Mug: 1024 S. Fulton St., 704-754-4615, meanmugcoffeecompany@yahoo.com

‘Road Trip Carolina, A Ride Across the Old North State’

Author Missy Julian Fox and textile artist/illustrator Elaine O’Neil will be introducing and autographing their new book, “Road Trip Carolina, A Ride Across the Old North State,” to children and readers of all ages, on Friday, Oct. 9 at The Stitchin’ Post from 5 until 9 p.m.. Their successful work on “Goodnight Carolina,” a book about Chapel Hill and the University of North Carolina, led them to team up again on a fun-filled invitation to explore their home state. Remarks will begin at 5:30 p.m. and will be followed by a book signing. The Stitchin’ Post is located 104 S. Main St. Call 704-637-0708 for details.

‘Grand Slam’ to be presented locally

“Grand Slam” is a powerful play about James Jones, a star Negro ball player whose drinking and gambling put him in a position that could have a lasting effect on his legacy and the Negro League. Written and directed by filmmaker Larry Wright, James Jones is a fictional composite character modeled after two of the greatest players that ever played the game, Willie Mays and Hank Aaron. The story is compelling, complex, and racially charged with strong language. Grand Slam is a play that will have people asking themselves “what’s next?” Performance dates are Saturday, Oct. 17 at 7 p.m. and Sunday, Oct. 18 at 3 p.m., at EastSquare Artworks, 120 E. Innes (back of Dee’s parking lot, adjacent to back door of old Barnhart’s Hardware), brought to you by RAP (Renaissance Arts Program). Tickets available at the door, or contact Whitney Peckman at 704-754-6771.

Too Much Sylvia headlines the Downtown Hickory Oktoberfest

Auditions for ‘A Charlie Brown Christmas’ at OCT

CONCORD — Old Courthouse Theatre will hold auditions Oct. 11-12 from 7-9 p.m. for the  regional premier of the 50th anniversary of the beloved Christmas story. It’s not Christmas without Charlie Brown, Snoopy, Linus and the Peanuts gang. Experience the classic animated television special as it comes to life in this faithful stage adaptation where the Peanuts gang learn the real meaning of Christmas. This is a show based on characters that are between the ages of 5 and 6. The director will be casting actors ages 18 and up. Show dates are Dec. 3-19. Old Courthouse Theatre, 49 Spring St NW – Concord, 704 788-2405, www.oldcourthousetheatre.org

— KANNAPOLIS — The Kannapolis Intimidators are hosting a holiday laser event Dec. 4-6 and are inviting local vendors to be a part of the crafts market in the ballpark. Holiday vendors selling ornaments, wreathes, and more, can set up a 10×10 booth on all three nights for only $100 (limited to the first 10 vendors; call 704-932-3267 to reserve a space).

SPENCER — Personalize a cottage and turn it into a doll, beach or mountain house or even a church or barn. The workshop will be held at the Spencer Doll and Toy Museum on Oct. 24 from 10 a.m.-4 p.m. The cost of $47 includes the cottage kit, kits for the kitchen appliances and cabinets, shingles for the roof and lots of accessories. RSVP to momsminiatures@hotmail.com by Oct. 17. Only eight spaces left.

WOODLEAF — Pantheon Acres Arabian Farm will hold its second annual Open Barn Party on Sunday, Oct. 11, from 11 a.m. to 4 p.m. The Farm is located at 2225 Needmore Road. Included in this year’s event will be horse training demonstrations, riding demonstrations, an equine massage demo, pumpkin painting (while supplies last) and face painting for the kids and the Hunt for the Golden Horse Shoes of Pantheon. New this year will be local vendors and a troop of authentic belly dancers. The highlight of the day is the formal Presentation of the Pantheon Arabians at 1:15 p.m. During the party, the barn is open and all the horses are in their stalls for visitors to see and pet. Farm staff will be on hand to answer questions. There are several foals this year, as well. That day, the Farm will offer specials on riding lesson packages. Also new this year will be PAA Goodie Bags which will be available, one per guest, to the first 100 guests. The event is free to the public, including the food, however we ask that guests RSVP by either a call or text to Billie Sullivan at 704-677-0853.

The Salisbury Branch of the English Speaking Union presents a program by Dr. Matthew Paul Carlson. Carlson is an assistant professor of english at High Point University, where he teaches courses on modern British and Irish literature, critical theory, and detective fiction and film. He has been published in Modern Drama, The Conradian, The Explicator, The Modern Language Review, and Clues: A Journal of Detection. Most recently, he contributed an essay on the 1936 film “Sabotage” to the book “Hitchcock and Adaptation: On the Page and Screen” (Rowman & Littlefield, 2014). This dinner event is Thursday, Oct. 22 at 6:30 p.m. at the Country Club of Salisbury. You do not have to be a member. Information/RSVP: Gerry at 704-213-6008. Reservations are $32.

Opening reception at Railwalk on Friday