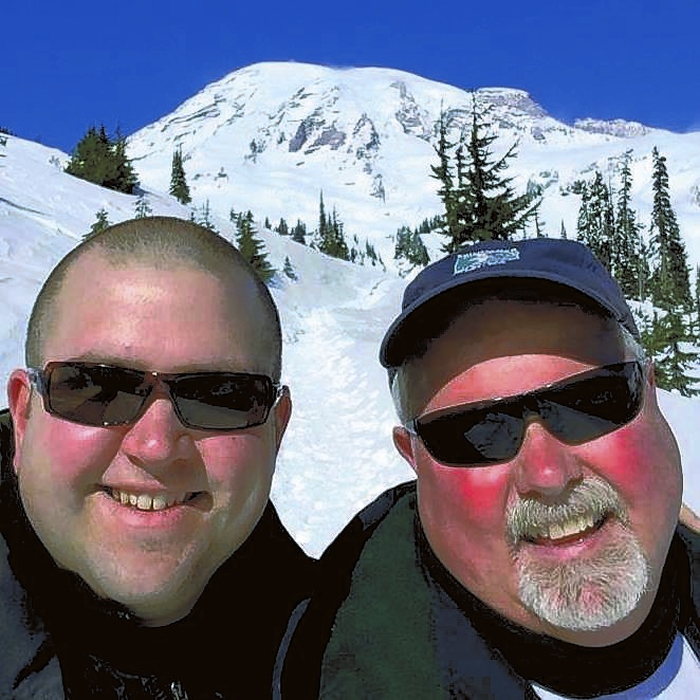 Rockwell resident Hal Sutton arrived in Frankfurt, Germany, at the end of September, looking forward to meeting up with his son, Army Sgt. Nathan Sutton.

What started out as a great guys’ reunion and aspirations for more than a week of seeing Germany together has turned into a nightmare. And there are still questions about how and when Hal Sutton will make it back home.

After getting over jet lag and sleeping much of the first day, Hal Sutton felt rested enough to walk around Bamberg and visit its cathedrals sitting on a hilltop.

“As we were making our way up the hill, Dad was having a hard time breathing and had to rest every few feet,” Nathan said Wednesday from Bamberg. “That’s when he had the heart attack.”

Nathan and an Army buddy, both of whom were on leave from their deployment in Kuwait, thought Hal should see a doctor. Hal rejected the notion, but they returned to the Bamberg apartment Nathan had rented so Hal could get some more rest.

“I think he was really in denial,” Nathan said.

By the next morning Hal’s breathing was even more labored. Nathan demanded they go to a hospital. “I think it finally settled in his mind that something was wrong,” he said.

Not only had Hal Sutton, 58, suffered a heart attack, but he had blood clots in both lungs and legs. His doctors in Germany have told him he can’t fly back to the United States because of the clots.

His only option for now in getting back home is to reserve a spot on the Queen Mary 2, an expensive trans-Atlantic cruise ship. Nathan looked into the possibility of booking them passage on a freighter, but they would not accept Hall as a passenger because of his condition.

The cruise ship is the only option because a medical doctor would be on board. The Queen Mary 2 is scheduled to leave Hamburg Oct. 20.

“I am on emergency leave until I can get him to the boat in Hamburg, which is its own logistical nightmare,” Nathan Sutton said.

The latest from the home front here in Rowan County is that Hal’s wife, Karen, is waiting for Hal to be released from the hospital in Bamberg before she takes a flight to Germany. If things work out, she will be picked up at the airport by Nathan and Hal on their way to Hamburg, from where Hal and Karen will get on the Queen Mary 2 and travel back to New York together.

In New York, Hal’s son Jason will meet the couple and drive them home.

The couple are facing considerable expense. Karen’s family members in Ohio have set up a Go Fund Me account on their behalf. As of Wednesday, the online fund had collected $2,805.

But friends say the Suttons will have close to $8,000 in travel expenses when it’s all said and done.

Karen Sutton said she and her husband are normally private people who would never think of asking for donations, but she is thankful for the help being offered.

The fundraising site for the couple is www.gofundme.com/z65w34rw.

Nathan originally planned to travel back on the cruise ship with his father until Karen was approved for family medical leave at Pinnacle Orthopaedics in Salisbury. That will allow Nathan to return to Kuwait from Germany.

“He’s got to get back to the military,” Karen Sutton said of Nathan, “but we don’t want him (Hal) to be released too soon.”

Karen Sutton says her husband had a CT scan Wednesday morning and will be meeting with a neurologist. He is no longer in intensive care, and Karen thinks he is improving, though she would rather judge that for herself, in person.

Rehabilitation lies ahead for Hal whenever he does come home.

When she received word of her husband’s heart attack, “I was thrown for a complete loop,” Karen said. “… I fell apart. That was the furthest thing from my mind.”

In speaking with Hal since the heart attack, Karen said they have decided they will never go on vacation without each other again.

Karen Sutton said her family, friends and co-workers have given her tremendous support. “I don’t know what I would have done without them,” she added.

A military policeman, Nathan had been deployed to Kuwait in April in support of Operation Inherent Resolve. It is a nine-month tour, and he arranged to spend most of his R&R in Bamberg with his dad and the Army buddy.

Nathan had been stationed in Bamberg in the 630th  Military Police Co. from 2012-2014 until the U.S. post there was closed down.

After that, Nathan, his wife, Whitney and their son, Oliver were stationed in Fort Lewis, Wash., with the 51st Military Police Co. That’s where Whitney and Oliver have remained during Nathan’s deployment in Kuwait.

“My wife and I had been apart before during my career and have discovered that sometimes it’s actually harder to come home on R&R, because you just have to leave again,” Nathan said.

So Nathan decided to return to Bamberg during his R&R and see how the city had changed since the closure of the U.S. post.

“My father saw this as a perfect chance to spend some time together and decided to join me in Bamberg,” said Nathan, an East Rowan High graduate who has been in the Army for seven years.

Maybe the cruelest irony of Hal Sutton’s not being able to fly home is that he is retired from customer services for U.S. Airways.