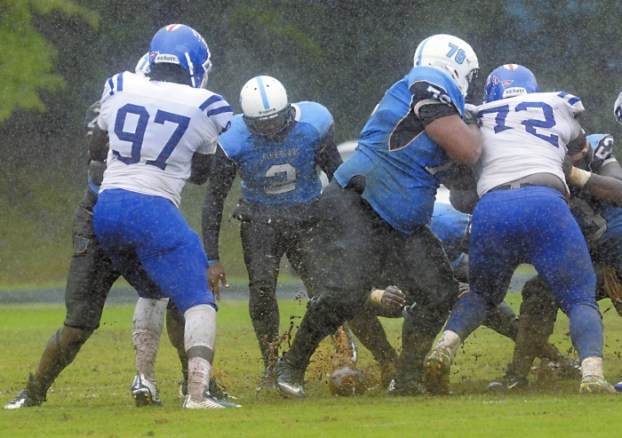 Livingstone quarterback Drew Powell, No. 2, looks down at the fumbled football on the ground. Rain made Livingstone’s field a wet, muddy mess on Saturday and made the ball hard to hold onto. The scene brought back memories for photographer Wayne Hinshaw, who played a similar game as a freshman at Randleman High School in 1960. Wayne Hinshaw/For the Salisbury Post

Last Saturday the Livingstone College Blue Bears played Elizabeth City State University in a football game that had, almost, the worst playing conditions I have ever witnessed.

I say almost because in my freshman year at Randleman High School, we played Rankin High School in Greensboro in nearly the same weather conditions.

Livingstone was faced with nearly a week of rain and drizzle, and then pouring rain on Friday and Saturday morning during the second quarter of their game at Alumni Stadium. It was a memorable game for the Blue Bears for all the wrong reasons. The terrible weather contributed to a terrible game.

I was at Livingstone on Saturday photographing the game for the Post when I had flashbacks of the Rankin vs. Randleman game in October 1960.

We had several days of heavy rain and really didn’t expect to get to play because of the weather. I don’t know why, but our game was moved up to a Thursday night game at the Rankin High field in Greensboro. Moving the game date certainly was not to beat the rain.

The Rankin playing field was typical of most of the small high school fields at that time. The field was flat, maybe even lower in the center than the edges worn down from overuse. It was like running into a bowl of water 100 yards long. It was like running into the ocean with water flying. There wasn’t much grass, if any. Who could tell about the grass under the 3-4 inches of water and red mud? Now, don’t get me wrong. This was the same field where country singer Billy “Crash” Craddock played his high school games. He got the nickname “Crash” because he was a hard running back when he wore the garnet and gold colors of the Rockets. (Craddock is in the N.C. Music Hall of Fame.)

At least they had a field to play on. Randleman had to play all of our games at Trinity High because we didn’t have a playing field at all.

On this game night, the rain never slacked off and the red mud got deeper and deeper. The game was mostly a game of defensive and offensive linemen pushing  each other around in the mud, slipping and sliding while the running backs tried to keep their footing to run the ball up the middle of the bowl of water.

Being a ninth grader, I watched the game from the bench. I was an offensive end. We didn’t call them wide receivers in 1960. I feel like I was the best receiver on the Tiger team. We worked on pass routes and passing drills every day in practice. The only problem was Coach Charles Gregory believed in a running game, so there were not many passes to catch.

As the clock ticked into the third quarter, we had a two or three touchdown lead over the Rockets. They pulled all of their defense up to the line of scrimmage to stop the runs up the middle. This is where I come into the game plan.

Coach Gregory called me over from the bench and told me to go in at right end and run straight down the field. Our quarterback would hit me with a pass about 10 yards from the line of scrimmage. What, a pass play in all of this rain and mud, from an offense that never passed the ball?

Onto the field I ran in my virgin-white No. 80 jersey. There was not a drop of mud on me. I was a bright shinning beacon, a light in the dark, a clean jersey in the mud bath. I was the only player on the field that you could still read my jersey number. All of my teammates wiped their red muddied hands on my pristine jersey during the timeout.

Our quarterback was Max Hinshaw. He was not related to me except by name. He was a short boy with small hands. I suppose that is why we didn’t pass the ball much and why we were about to pass for only 10 yards. In practice, all of our passes were “10 yarders.”

This is where the story gets good.

I lined up in my three-point stance at right end. Max called the numbers, “Down, set, 1, 2” and the action started with the snap of the ball. I ran the best I could. Splash, splash, splash, and I was 10 yards down the field. I looked back over my left shoulder and was truly shocked to see that heavy, wet football right there in my hands. I caught that ball on the run and I didn’t stop running until I cleared the goal post at the end of the field before running into the woods.

I couldn’t see any line markings on the field. I guess they were under the water and mud. I didn’t know where the goal line was, but I knew it would be somewhere before I got to the goal post. During that 35-yard sprint, I never encountered any Rankin Rockets or referees. All the Rankin players were piled up in the middle of the field waiting to stop the run up the middle. The referees must have been napping as well, since I beat them to the goal line for the TD.

After the TD run, I splashed back to the bench to take my place. Of course, Coach Gregory never had us kick the extra points. We always ran the ball for extra points. Back then, extra points were all 1 pointers, kicked or run. We didn’t even have a kicker except to start the game.

That was the only play I had in the game that night in the rain and mud.

The next day in the Asheboro Courier-Tribune, the short story about the game said the score was 38-6 and, “The Tigers Were Growling, Blasting Rankin.”

The scoring totals showed that quarterback Max Hinshaw had scored on my 35-yard pass play. Oh no, my only play. My only TD and Max got the credit for my score, and we were not even related except by last name.

By Elizabeth Cook elizabeth.cook@salisburypost.com At one point, Jim and Kathy Carlton thought they might make the restoration of Jim’s old... read more