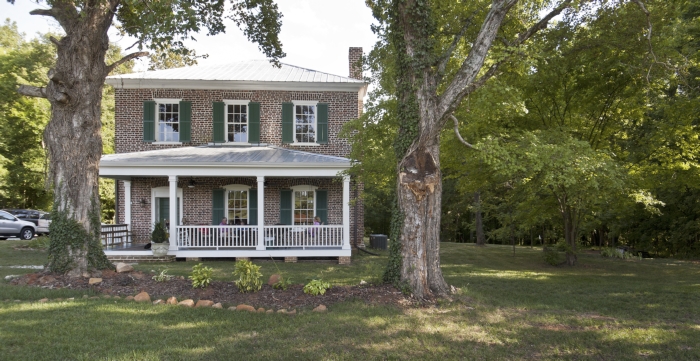 Jim and Kathy Carlton restored and made some additions to the historic Peter Kern House. The home was built around 1820 and is one of the few remaining brick Federal Style homes in Rowan County. It will be among the homes featured on this weekend’s OctoberTour. Jon C. Lakey/Salisbury Post

At one point, Jim and Kathy Carlton thought they might make the restoration of Jim’s old homeplace a family affair.

The Peter Kern House, which will be open for OctoberTour this weekend, had housed generations of Kerns and Carltons since being built in the early 19th century. But the noble brick structure had fallen into decline. Floors sagged. Walls were cracked.

After Jim and Kathy bought the property and brought it back into the family in 2012, they planned a full restoration, including a family workday.

That was a mistake, the Carlton say.

Eighteen siblings and cousins showed up, eager to help, but things just didn’t go their way.

A nephew checking out the attic stepped in the wrong place and fell through the ceiling.  Cousin Meeta Carlton Lampert tripped over a threshold and fell as she was coming out of the bathroom.

Kathy, who had gone to town to pick up barbecue for the group, got held up by a bicycle race. Once she got the food she stopped by her house on Bethel Drive and, as she was backing out, realized too late that she’d left the back hatch of the car up. The food slid out of the car and she backed over it.

When she finally reached the farm, she ran over what she and Jim called their “red neck road block” — a 20-foot board with nails sticking up to flatten the tires of trespassers.

That took the air out of family workdays.

But it did not deflate the Carltons’ enthusiasm for restoring the Federal-style house in which Jim had grown up. Built around 1820, it has 18-inch walls, an elegant curved staircase, plaster cornices and classical mantels.

Jim and Kathy carefully restored it all, doing most of the work themselves.

The Peter Kern House has stories to tell — such as when Peter Kern married his third wife, Fanny Cauble. He was 65, she was 19. And while Fanny was home alone during the Civil War, she hid Confederate soldiers in a space beneath the stairs — so the family legend goes.

Retired educator Karen Bowyer did extensive research on the house and family several years ago, and found Fanny a Southern belle worthy of admiration.  “In my book, Scarlett takes the back seat,” Bowyer wrote. The Peter Kern House was once the heart of a 1,100-acre plantation.

In addition to being part of OctoberTour on Saturday and Sunday, the Peter Kern House will be open for an insider tour for those attending the OctoberTour luncheon on Friday. The luncheon, to be held at the Rowan Museum from 11:30 a.m. to 1 p.m., will feature Dr. Gary Freeze speaking on “Re-discovering Rowan County’s Plantation Heritage.”

The 12 sites on the Historic Salisbury Foundation’s OctoberTour this weekend cover a span of history from 1799 to 1929 and all have stories to tell — as ticket holders will hear from docents in each house. If walls could talk, the Fulton-Mock-Blackmer House could share tales of movie stars and a terrible fire. But that’s another story.

The weekend includes the Bank Street Café, with area restaurants selling food and drink both days of the tour. The new Shops on Bank Street will be open Saturday; local craftsmen and other store owners will have merchandise for sale.

OctoberTour After Hours and Artist Reception will take place from 5 to 7 p.m. Saturday on the Hall House lawn, 226 S. Jackson St. Beer, wine and other refreshments will be available.  A Civil War encampment also will be set up on the lawn of the Hall House.

An OctoberTour ticket allows one visit to each tour site and can be used on Saturday and/or Sunday. Tickets are non-refundable. Tickets ordered online (www.octobertour.com) or by phone will be held at the Henderson Law Office, corner of West Fisher and South Church streets.

Advance tickets for non-members are $25. They are available online, at the foundation office and several area businesses. Children’s tickets are $10.

Day-of-tour tickets are $30 for all adults and can be bought at the Henderson Law Office and at the tour sites.