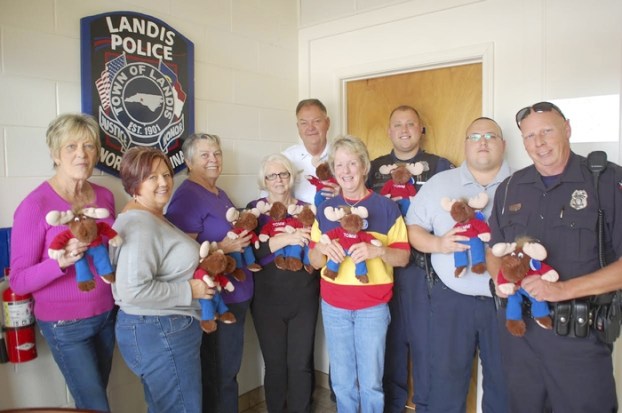 From left, Becky Rutledge, Carolyn Pinyan, Sandra McGalliard, Carol Hawks, Police Chief Bob Wood, Alice McRorie, Officer Josh Barlow and Lt. Kevin Johnson with stuffed animals donated to the Landis police and fire departments by the Kannapolis Women of Moose Chapter 851. The toys will be carried by police officers and firefighters who give them to children who have suffered trauma. Rebecca Rider/Salisbury Post

LANDIS — When life is hard, sometimes all you need is a friend. But for children who have suffered trauma and loss, a friend can be hard to come by.

That’s why the the Kannapolis Women of Moose Chapter 851 are stepping in and donating 12 “Tommy Moose” toys to the Landis police and fire departments. The toy is a part of an initiative begun by Moose International as a way to help children who have experienced trauma — the loss of a home to fire, a car accident or domestic violence. These cuddly buddies ride along with local police officers and firefighters, ready for a hug and willing to provide all the comfort they can.

Landis Police Chief Bob Wood says the department has a long history of using stuffed animals to comfort young trauma survivors. They get a lot of donations dropped off at the department, especially around Christmas time. Wood says the toys are always welcome because it helps take the kids’ minds off of what’s happening around them.

“It gives them something to focus on,” he said.

K-9 Officer Josh Barlow says it’s become kind of an unofficial protocol for the officers and firefighters in Landis to keep at least one stuffed animal in their vehicle at all times. Barlow says he keeps an entire bag. And they do get used. Barlow estimates that he gives out at least one toy a month — whenever he arrives on a scene and finds a child.

For the Kannapolis Women of Moose, it’s just another way they can help those in need. Senior Regent Sandra McGalliard says the chapter is highly involved in community events and charities, including Duke Cancer Patients Support, Moose Haven, and promoting awareness about domestic violence.

“It’s just a way to do something good for the community,” Carol Hawks, a Moosette, said.

McGalliard says they chose the Landis police and fire departments because they were the closest Rowan County stations to the chapter’s home in Kannapolis. But they may be reaching out to other departments, as well.

“We probably won’t even know what child gets the stuffed animal,” Hawks said, “but we hope it helps.”

And if the Landis departments ever need more, all they have to do is call Chapter 851 and ask.

The students in Renee Fox’s middle school math class are helping cats back to their owners and playing on number... read more